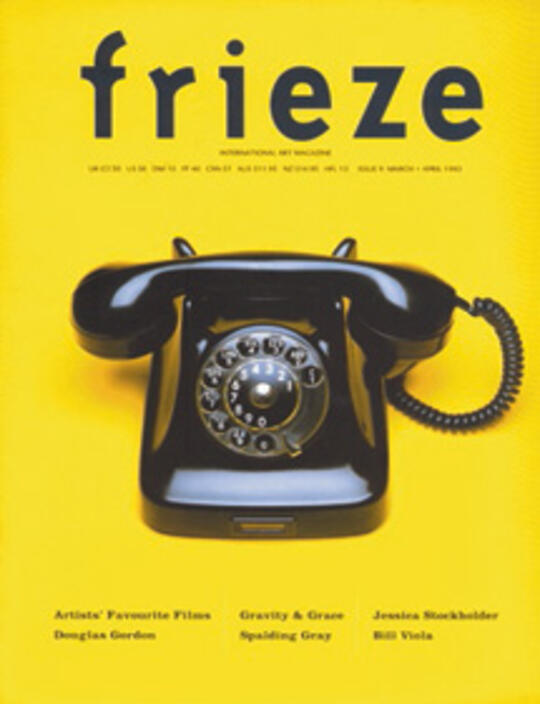 A list of the themes which make up Tim Head's eight or so years work exhibited at the Whitechapel would include nature, culture, sex, death, disease, pollution, consumerism and the media. A list of the materials employed by Head in visualising these themes is similarly impressive: from paint on canvas to cibachrome photography, ultra-violet light, computerised print scanners and enough astroturf to keep a flock of plastic sheep happy for a month. Clearly a link is intended between themes and technology. Synthetic materials and mechanical techniques are combined in the evocation of a dystopian world of over-production and over-consumption, alienation, exploitation, manipulation and control.

Such a description could be misleading. The picture it suggests is of a chronically depressed (and depressing) social realist trudging round in the damp half-light of a Blade Runner set. The actual mood of the show is far more upbeat, generally bright in a bland sort of way, and rather innocent looking. But this is surely part of the point: in our modernity all things - even famine, war, pestilence and death - come in designer packages. It is a point made best in a group of cibachrome photographs and paintings shown in the upper galleries.

In these, and in the majority of Head's works, there is a trade-off between the imagery - mostly the ephemera of chainstore packaging, kid's toys, corporate logos and electronics - and the means by which it is represented. Through being isolated, or magnified, or sundered from their functional context in some other way reminiscent of Pop Art, these forms are rendered decorative or pictorial, turned into picture-types - landscapes, still lives or abstracts. This trade-off doesn't always work. Cibachrome gives anything an exotic look, with or without the help of rich lighting, but this isn't enough to transform several magnified dildoes into a Manhattan skyline. And even if the transformation worked, would it help? Some of the paintings have a better tension between imagery and pictorial genre - they hold some interest as surfaces and it takes a little while to figure out what's being depicted.

The smaller works generally come off better. At 7'x5', Replicator (1987) is the smallest and best painting, and the less huge photographs also look more successful. As a rule the larger the work, the worse it gets, which is a shame because Head likes to work big. The installation on the ground floor is very, very big. Titled Thirteen Most Wanted, the entire gallery floor is carpeted in astroturf, the walls are coated in light sky-blue emulsion, and these are hung with 15 canvases up to 12' wide, two of which are not meant to be seen as part of the main installation (for some reason.) The gallery looks simultaneously overcrowded and empty. There seemed to be no formal or thematic connection between these canvases and the schematic sky and grass setting within which they were placed. So I read the catalogue. This was illuminating. In a long essay by an infatuated Marco Livingstone we learn that in the canvases 'the organic and the inorganic seem to have been fused into an unnerving mutant form symptomatic of the brave new world into which we are moving', while at the same time we are 'invited to imagine ourselves in the middle of an open field on a bright spring day...[it is] as if we had been placed in the perfect stillness of an eternal heaven by Fra Angelico'. Well, sort of.

Head's own commentary is a little more reserved, but still on the apocalyptic side, as are the titles of his photographs and paintings. The trouble with big work is that it tends to generate expectations of importance. It looks like it has something important to say for itself, or is waiting to have something important said about it. But big themes don't necessarily make significant art. As the history of the last century and a half has shown, the will to silence has been at least as strong as the will to significance - or has been a condition of art's significance. Nor has the most significant art always been the biggest, or the biggest art the best vehicle for serious themes. Head makes big pictures of big themes as if each is necessary to sustain and support the other. The evidence of the show does not support this idea any more than the history of art does.

The evidence of the Frith Street show doesn't support this idea either. Here, the same or similar designs which made up Thirteen Most Wanted are presented as small-scale works on paper in simple frames. Their impact is quite unlike that of the large versions. The shapes are more legible and the colours more intense, which makes it a lot easier to see the images as variations of a number of semi-organic, semi-manufactured forms. Moreover, their size and medium helps to give them a more provisional and experimental look. I still don't see them as psychologically loaded in the ways Head or Livingstone describe, but they don't require those kinds of descriptions to sustain them. This is just the point: in shedding the baggage of stipulated meaning, these works don't lose credibility and integrity, they gain it.