The Time is Now

On being an American in Europe 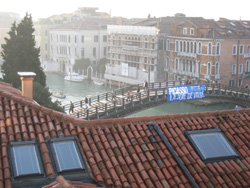 I am about as American as you can get. By birth New England, by heritage and upbringing smack dab in the Midwest. My grandparents were the kind of small-bore Republicans who voted enthusiastically for Eisenhower and tolerated Nixon; my parents and neighbours were big-city Democrats who placed their hope in Kennedy and crossed their fingers with Johnson. Further apart on the spectrum, I have libertarian right-wing cousins and have had revolutionary Marxist friends. I am of the generation that learnt the hard way that neither brand of mainstream politics had much of a prospect in the last third of the 20th century, while the extremes fluctuated in numbers and zealotry as the middle-of-the-road split. Vietnam – meaning the expansionist ambitions of the ‘military–industrial complex’, against which Eisenhower warned, coupled with the unreasonable trust in ‘our’ good intentions and the ungrounded optimism in foreign adventures to which Kennedy fell prey – started my country on the long, bumpy road that now threatens to end in a national train wreck.

Once again, though, I am watching this process from afar. (The bridge currently outside my window crosses the Grand Canal rather than the East River.) Although I have never been an expatriate, I’ve lived outside the United States numerous times, speak one foreign language well and others badly, and have observed America’s tribulations from a distance yet felt their impact intimately wherever I have been. In 1967 I registered for the draft in Rome; in 1968 I watched on TV in Toronto as the police rioted at the Democratic Convention; in 1970 I painted murals in Mexico City and experienced the weight of the ‘North’ on the ‘South’; in 1971 I got a job in Lyon and a room next to Arab students who described the Middle East from their side; and in 1977–8 I lived with my not-yet-wife in The Hague, where I followed the news of the bitter drift ‘back home’ on the radio. Each time there was trouble, people asked what I thought, often assuming that my being abroad signified estrangement from my native land and prior agreement with their stereotypical idea of it – evidently being judged ‘exceptional for an American’ was intended as flattery – plus sympathy with their worst fears about its conduct in whatever turmoil currently beset the US. And each time, I made the point that the USA was created by revolution, had survived civil war and was as used to conflict as it was obviously prone to it, but that it was also better than most societies at retaining, or at least regaining, its balance in a crisis – and certainly as good as any country that had possessed disproportionate riches and power. Americans, I argued, were remarkably able to learn from their mistakes, no matter how big, costly or unconscionable, and, more importantly, they were capable of calling to account those who misled them once they had been disenthralled.

I still believe that, but such faith has lost its credibility in many quarters. Moreover the undertow of the scepticism has begun to erode my own Whitmanesque conviction that the American multitude is simply too diverse to be driven to disaster against its better instincts. Lincoln, who presided over the Civil War, in which Walt Whitman served as a medic and witness, had perhaps the finest sense of the essential decency and intelligence of his compatriots, and of the tragedy of their temporary follies and fanaticisms. Famously he declared: ‘You can fool all of the people some of the time, and some of the people all of the time, but you can’t fool all of the people all of the time.’ He’s right even now, despite the massive distraction and disinformation spewed out by our increasingly frivolous, rancorous media. Indeed it is an added testament to Americans’ abiding common sense that they can endure the blast of so much falsehood and still recognize the dull ring of counterfeit coinage.

The results of the last congressional elections suggest that Americans are finally disenchanted with the hard ideological turn their government took under George W. Bush. What is discouraging and nearly impossible to explain is why, given the rejection of his policies, they are reluctant to call an abrupt and definitive halt to his unceasing efforts to ‘stay the course’. Equally inexplicable is the public’s continued willingness to give the man himself the benefit of the doubt, despite all they have learnt about his abuse of privilege, his contempt for and callousness towards ordinary citizens, and his utter cynicism regarding America’s traditions, institutions and laws. Other presidents of both parties have failed badly, and others have lied outrageously. None has precipitated such an unrelieved débâcle as Bush, and none has so disgraced his office. No more holding our breath, no more holding our tongue. There is no way out of or around the damage he has caused unless everyone says that plain, out loud and repeatedly and everywhere – until he goes.