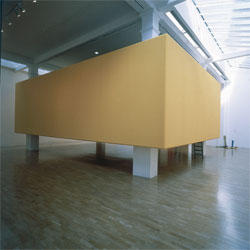 Tobias Rehberger catapulted himself onto the international scene in 1997 with his contentious proposal to refashion a sculpture by Donald Judd into a bar for the Munster sculpture exhibition. Naturally the Judd estate turned down the proposal, but the idea triggered a certain amount of debate. For many it was an irresistibly cheeky gesture; for others it was a bold critique of the ostensible autonomy of Judd’s sleek, sacrosanct sculpture. Either way, the attitude that pervaded Rehberger’s proposal neatly sums up the approach of a number of contemporary artists who share his penchant for commingling art with design, of which there are now many – perhaps too many.
For this, his first solo exhibition in the UK, Rehberger continued his investigation into the placing of contemporary design in an art context. This has been played through at times by transposing functional objects into the gallery and at others by subtly altering certain elements of the gallery design itself. Although this new installation effectively dovetailed these two strategies, there was a subtle difference at work. For this installation opens up a more personal, perhaps even autobiographical, perspective onto design, something gestured towards in the exhibition’s title, ‘Private Matters’. Where previously Rehberger had explored the personal only in relation to other people’s desires and drives for certain types of design, usually by shaping installations consisting of couches, TVs and drinks cabinets according to the wishes of an individual, he now turned the spotlight on himself, and under its glare something of his own disposition was revealed.
The installation began in the gallery’s lobby, its walls coated with an undulating wallpaper pattern