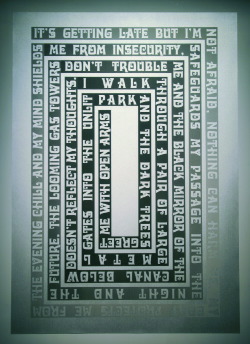 Tom Gidley was recently described somewhat ironically as a visionary artist. First impressions of this recent solo outing suggest the statement may not be too far from the truth. Gidley's first narrative-base video and the show's centrepiece, In the Trees (2003), was projected onto Store's far wall. It describes a scenario in which a solitary man in a forest hears a voice warning him that, unless he changes his ways, he is assured a horrific and desolate future. Strangely it transpires that this omnipotent presence emanates from a sparrow in a nearby tree. Is the voice an interior form of self-doubt? Does this all-seeing bird represent a form of psychosis? Or is the artist simply having us on? Shown on a loop, it takes a few attempts to figure out certain things.

The man, in his early 30s and dressed in a German army jacket, appears hungover. Out for a brief walk, he contemplates his life and his imminent marriage to his unfaithful girlfriend; he is by turns nervous, despondent and irritable. Rather than facing an incontestable future, as is suggested in the exhibition's interpretative text, Gidley's character is given an opportunity to steer things in a favourable direction. With a slight West Midlands accent, the young man sits in opposition to the sparrow, who cajoles and taunts him with a voice that is older and much more authoritative. 'You can do one small thing that may go about redeeming matters ... I'm offering you a last chance ... there are small windows of opportunity that open without announcement and then close again just as swiftly.' The mild authority of this benign 'natural' voice is greeted by the man with a stubborn refusal. 'The future's not fixed, I can do whatever I like.' Gidley's character is eventually condemned to his fate as a future alcoholic who subsequently fails to take an opportunity to save his son Wayne from a similarly desperate life. Because of his lack of confidence in his tormentor - perhaps his own inner voice - he fails, and a small glimmer of hope disappears.

Despite the gloom, In the Trees is startling in its complexity. It ends with the man slumped in despair against an enormous tree stump while the invisible narrator describes his fate: 'You fell foul of your follies years ago ... and then you find yourself here, unaware that it's all about to start again.' Employing the illusory gap between the character's internal and external worlds, Gidley quite deliberately skews ideas of time; not only has this man been forced to live a life of misery, but he's asked to live it twofold. Importantly the film also reveals a certain brutality as it muses on issues of authority and self-determination. As the sparrow or the man's own self-defeating psyche paradoxically tells him, 'self-determination is a myth.'

The exhibition's two other works riff on similar ideas of humour, contingency and self-annihilation. It's Getting Late (2003-4) is a screenprinted spiral of text from Gidley's unpublished book Stunning Lofts. Lit softly in the dark, the reflective surface of the paper sparkled on the gallery wall, belying the printed words, which read 'I walk through the metal gates and the dark trees greet me with open arms'. This ominous final line from the final paragraph in Gidley's book sits in stark contrast to the light, utopian poster form of the work. Similarly, Her Meditations (2003-4), a small-scale model of a mainly glass stairwell in a local council block, is used as a gardener's cloche. Home to a number of weeds adept at surviving the most ruinous decay, it enacts a similar paradox; in this metaphor imagination runs wild in mundane and decrepit circumstances, as likely to dwell on the dark and the negative as it is to prove a noble survivor.

Contrary to first impressions, Gidley seems to be saying that self-determination comes in many different forms. The intricacy of his work is dosed with a reflexivity that catches itself before it implodes, revealing a healthy scepticism about the magnitude of our existence. As the invisible sparrow might observe: 'In the grand scheme of things you are a speck of dust, a clump of cells, a bag of water, that's all. You are worm food - you feed my food - and don't you forget it.'