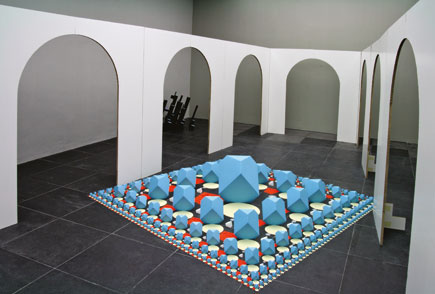 For the fourth and final part of ‘Isn’t Life Beautiful?’ – a series of solo shows at the Frankfurter Kunstverein, curated by the institute’s new director Chus Martinez – Danish artist Tommy Støckel has created an extraordinary group of new sculptures. Though designed using complex, computer-generated calculations for mathematical growth and fractal patterning, the works are constructed from very simple materials, such as paper and cardboard, triggering a sense of awkward dislocation between their very high-tech design and evidently manual execution. The pieces are incredibly intricate, revealing an almost pathological obsession for minutely rendered forms executed in infinitesimal detail. The impression they give is of a kind of digital origami; the difference being that, whereas with the Japanese art the hard edges of the paper enforce an angular and geometric pattern onto generally organic forms (one thinks of the classic swan), in this case the geometric quality of the computer models is given a sense of warmth by the obvious intervention of the artist’s hand.

The installation consists of two architectural environments, which were specifically conceived for the two main spaces on the Kunstverein’s first floor. The rooms reference the architectural heritage on the institution’s doorstep: the ancient Roman ruins and the Cathedral, which was horribly damaged in the blanket bombings of World War II that destroyed almost 80 percent of the city.

The visitor first passes through a threshold enclosed by a collapsing wall of white cardboard, covered in decahedrons of various reducing sizes, created by tiny triangular paper facets in fading shades of green. The impression is that of an ancient ruin covered in ivy. Upon this wall, the words ‘Isn’t Life Beautiful’ (2006) (the title of both the work from 2006 and the exhibition series) are spelled out in relief block letters; the whole suggests a pastoral sense of romantic reminiscence.

The first major room is monopolized by a vast, white cardboard portico (Untitled, 2006) that diminishes in an exaggerated perspective to the back of this almost-empty room; the effect is like walking onto the set of a De Chirico painting, while the work also clearly references the destroyed ancient porticoes and their Modernist replacements in the piazza outside. Placed on the floor at the dead end of this passage is Exposed Superstructure (2006), a fastidious arrangement in grid formation of hundreds of turquoise paper polyhedrons, ranging in height from one to 50 centimetres. These are in fact replicas of the mysteriously truncated form in Albrecht Dürer’s Melancholia (1514), the oft-discussed engraving whose allegorical aspects make reference to geometry, architecture, mathematics and time, all of which play a key role in Støckel’s own production.

The second environment evokes a ruined city, with crumbling cardboard walls delineating smaller spaces that enclose individual sculptures. These address the passage of time in the form of decay or destruction: the broken sections of a collapsed column in Clash of the Classics (2005–6) look like ruins at an ancient temple site – aside from their incongruous bright red bodies and pink interiors – only the fallen pieces seem to have fit together not as a series of flat-bottomed drums, but through an elaborate system of minuscule interlocking crystalline forms. Collages hung on fallen wall sections incorporate images of destroyed Berlin culled from model-making magazines, whose replica ruins can be bought and assembled at home. Cracked Space (2006) is a broad, low piece in shades of grey and white that looks like an inlaid stone floor, though one that has suffered an earthquake and no longer lays flat, and whose uneven tiles project upwards exposing lemon yellow sides. Time Told by the Shape of a Shadow (2006) is a cream-coloured sundial on a faceted column, from whose base small square segments, like tesserae, have started to become dislodged and fall to the ground, exposing a light purple skin that is peeling away to reveal bright orange insides, as though flesh had been encased in stone, although the effect is like a computer-generated image whose pixels have somehow started to erode and disperse.
The ostensible displacement of tangible sculpture from a virtual world and the compression of antique past, technological present and historic future seems to point to a location outside of a specific time and place. From here, Støckel’s exquisite decay, juxtaposed with the historic destruction outside, gently coerces the viewer to consider the disparity between romantic ideas of destruction and the horror of its reality.