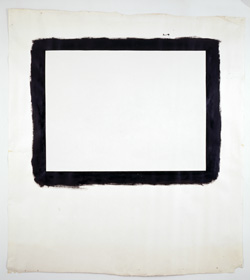 Reprising work and even whole exhibitions from the 1960s and 1970s is currently in vogue, yet there was nothing trendy about Tony Conrad’s ‘Yellow Movies’ redux. Originally a one-night ‘screening’ at New York’s Millennium in 1973, Conrad’s films are large, irregular sheets of seam-less paper, their centres casually outlined in thick black paint, which provides a frame for a precisely rendered movie screen; these were coated with cheap house paint, their meticulous, perfect-imitation shapes imbued with unexpected authority. Each one feels like a burst of light, even – almost – of sound. Although the paper isn’t flimsy, the indelicate paint lies heavy on it. Conrad carefully noted the customer-luring names ordinarily limited to the DIY world, such as ‘Honey Beige Low Lustre Enamel’ or ‘Odourless White Flat A-C-M Scrubbable Nu-Plastic Velvet’, perhaps further punning on the double entendre of ‘yellow movies’, the Chinese equivalent to our ‘blue’ cinema. Also included were four small works on canvas: Yellow Movie 35mm, which featured screens outlined in various thicknesses of black paint. As Conrad wrote in 2005, the Yellow Movies were initially conceived as an ‘intervention’ to ‘dismantle the authoritarian boundaries of film culture during 1972–4’, in which the artist and filmmaker adopted the ‘conceptual armature’ of ‘extended duration’. Nearly imperceptibly sensitive to light and therefore ‘running’ continually, these films are meant to screen for a lifetime.

A roomful of these movies playing to each other sets a wry tone and gives the viewer notice that more will be required than mere gazing. The pieces are informal, the work pinned to the wall, the paper often ragged-edged, even sporting bits of silver electrical tape at its margins. Along with the relaxed black borders, the backgrounds suggest everything that is not on the screen, the chaotic mess of life outside or beyond the film frame – the wider view our obsession with a boxed-in image fails to give. Conrad’s work is inclusively de-manding, actively looking for receptors; it falters
if viewers refuse to take part.

The colours of the screens (from a distance they even look like one frame of film, a throwback to the days – not so long ago – when all editing was spliced by hand) are mostly in the pale yellows and off-whites, veering almost to squash colour. In Yellow Movie 3/2–3/73 and Yellow Movie 3/4/73 (both 1973) a roll of royal blue paper holds two screens, one on top of the other, the roll spilling onto the floor. Proclamatory in its presentation, the effect is not so much double-bill as simultaneous programme – and with the nagging feeling that you might be missing a better one. The most suggestive of a cinema was Yellow Movie 4/24–5/24/73 (1973), in which the on-paper screen was framed by pieces of yellow and black cheesecloth, to make a playful proscenium.

In Yellow Movie 3/5-6/73 (1973) the Super Valspar No. 10 screen was covered with a clear gloss varnish, the resulting parchment colour imbuing the piece with a certain Founding Father’s resonance, the colour exactly that of a US mail-order facsimile Constitution. Although the duration they represent is abstract, there were also practical overtones: the pieces were made at the point when public outcry forced Richard Nixon to end the prolonged US involvement in Vietnam, when the public mood was impatient with the feints and dodges that cost lives.

Conrad has not only made more conventional films and videos (a selection of which were screened once during the exhibition) but is also well established as a composer, a pioneer of Minimalist music before anyone knew what to call it. Time is, of course, central to the Yellow Movies, but they’re also about timing, their appreciation dependent on a suspension of conventional hasty viewing habits. They share a deceptive simplicity with some David Hammons pieces and are reminiscent of Hammons’ remark that ‘there are so many kinds of nothingness’: something that bears repeating in our brand- and object-obsessed culture.

The Yellow Movies also have affinities with Jorge Luis Borges’ paradoxes, in particular Funes, el memorioso (Funes, the memorious, 1944), a short story about a boy ‘renowned for a number of eccentricities’, including the inability to forget anything, generalize or even sum up. ‘His own face in the mirror, his own hands, surprised him on every occasion […] Funes could continuously make out the tranquil advances of corruption, of caries, of fatigue. He noted the progress of death, of moisture.’ ‘Yellow Movies’ invites you to become a temporary Funes, to acknowledge the invisible and inescapable lapse of time we often go to other movies to forget. As they approach their fourth decade, these pieces could hardly be more timely.