Feminism and its thresholds 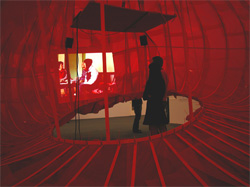 ‘Tradition, after all, holds the same etymological root as treason’, theorist Diane Elam mumbled into the microphone. At the first feminist conference I attended, in the mid-1990s, young academics were already grappling with being disavowed by previous waves of thinkers. Conflicts in Feminism have become largely generational in character, with various shades of suspicion or complacency replacing the militancy of yore. Feminism has also been channelled into institutionalized box ticking. Which may be a sign of success. But it also means that within the hectic art-world economy of happy buzzwords, Feminism is rarely addressed beyond lip service. Behind the scenes, it’s common to giggle at the mention of Feminism as if it were something scatological, or to explain that, regarding the 80/20 gender ratio in a show, well, there were simply too few good women artists around. Which is why the recent spate in feminist initiatives is worthy of note.

In 2005, Fia-Stina Sandlund, co-founder of the artist group Unfucked Pussy, convinced the owner of the Miss Sweden trademark – swimwear designer and self-styled ‘Bikini King’ Panos Papadopoulos – to cancel the Miss Sweden contest. In a country boasting remarkable feminist successes, it would have been easy for a young artist to rest on the laurels of past achievements, but Sandlund and her cohorts departed from generational clichés. The project remained confrontational and refreshingly understated, refraining from any sloganeering or sanctimonious berating of weight-to-height ratios, proving that there’s a thing to be said for callous, blunt negativity – for radicalism without the sermon.

In 2006, ‘It’s Time for Action’, the elaborate exhibition on Feminism at the migros museum Zurich, featured Erik van Lieshout’s video, Fantasy Me (2004), in which the artist attempts to teach the correct pronunciation of the word ‘Feminism’ to a character called Tessa, played by a Chinese actress from Xiamen. The artist stages an English lesson of harrowing brutality (‘Familism?’ ‘FEE-MII-NII-SM!’) and moves on to vivid scenarios of Eurocentric male domineering as Van Lieshout attempts to reeducate Tessa into something akin to his personal Kung Fu fantasy, teaching her martial arts and more. The piece is as brilliantly uncomfortable as the artist’s perseverance is abhorrent, although his persistence is perpetually undermined by structural, humorous and stylistic devices.

It is perhaps predictable that I (a male writer) have singled out the work of the only participating male artist in the show for comment. This is precisely the type of thing that makes minority movements resent the whites who join their cause. But Van Lieshout, being neither apologetic nor self-congratulatory nor cathartic, not only articulates a self-reflexive, derivational male position within Feminism (as opposed to a transformational one), but also addresses the ‘white’ side of things precisely.

For while some strands of Feminism are feeling the heated dialectics of militancy and institutionalism, others are forming a steadfast routine. They join an old imperial tradition that divides the world into geo-hygienic chunks of progress here, mucho machismo over there. These moral cubbyholes allow us to scoff at the idea of contemporary art existing in places where, say, women cannot go to soccer matches, no matter what you care to know about the art, the places or the women involved.

Unfortunately, infotaining armchair deliberations on whether to ‘boycott’ or ‘compromise with’ patriarchal regimes ignores the stuff of Really Existing history: the imperial heritage of women being used as pawns for ideological agendas across the board, for instance. For many, it is hard to conceive of the West as a place that regularly makes things more difficult for Feminism, not less. Addressing the entwinement of colonialism and Feminism, Gayatri Spivak once identified a fantasy of White Men saving Brown Women from Brown Men, and traced the silencing of local women through beleaguered nativists on the one hand and self-proclaimed liberators on the other. Assuming you can ‘teach’ emancipation like a TEFL blueprint is one primeval strain that has survived all conflicting waves of western Feminism. Of course it is no longer a matter of White Men as much as a question of class – of Oprah Winfreys and others playing the part with ferocious aptitude.

My point is not that noisy compassion for women in rogue states can further your career, but that there are thresholds that cannot be bridged. The agendas of, say, First World onlookers and Third World feminists differ too radically. Since facile gestures of solidarity are now so common, this is a point easier made than understood. A compagnon de route simply cannot claim to share the same objective as the people doing the homework, as those collecting the $20 cheques, the signatures and the hate mail, pursuing generational debates on tradition and treason, and patient negotiations with various Bikini Kings. Alternately, the kind of reflexivity in Van Lieshout’s Fantasy Me may not be much, but it’s a fine place to start.

Tirdad Zolghadr is a critic and curator based in Berlin.