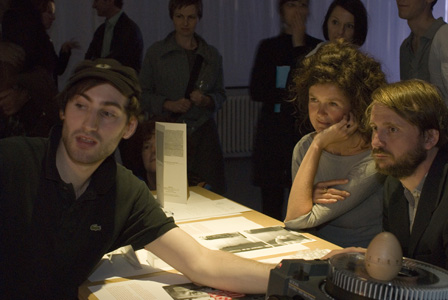 In an interview with Robert Storr in 1994, Ilya Kabakov, a year after representing Russia at the Venice Biennale, suggested that ‘the roots of the Western installation lie in Happenings and Actions; the installation is actually the remains of events frozen in time … The origins of East European installations lie in painting. Here the viewer … makes the passage to the other side of the glass, enters into the painting.’ In the performances and makeshift mises-en-scène of Tris Vonna-Michell this East–West distinction is happily confused. At a solo show in May at Witte de With, Rotterdam, the young artist rattled off three episodes from an unfinished meandering narrative: hahn/huhn (2004), Finding Chopin: In Search of the Holy Quail (2006) and Down the Rabbit Hole (2006–7). Some or all of the events in these absurd tales may never have occurred, yet all are narrated with a breathless persuasiveness so as to seem tentatively real. Vonna-Michell’s modern day picaresques unfold within dimly lit installations, comprising projections, arcane ephemera, personal correspondence and scattered photocopies. The sparse props in these indeterminate spaces are less the detritus of ‘events frozen in time’ than points in a hyperactive dot-to-dot puzzle, a mind-map of postwar Europe, gleefully hopping either side of the Berlin Wall.

The young artist’s surname is an unlikely one for his home town, the English seaside resort of Southend, and it is Vonna-Michell’s search to understand the oddity of this familial displacement that generates the journey retold in Finding Chopin. ‘Why was I born in such a place?’ asks the young Tris. ‘Ask Henri Chopin – all you need to know is that he loves quail eggs, lives in Paris, and is 82 years old,’ replies his father, gnomically. So starts the desultory trip, with Vonna-Michell the protagonist, which skips between Glasgow, France and Norfolk on the trail of the eponymous concrete poet, whose relocation to Essex purportedly influenced the Vonna-Michells’ move. While this pursuit can appear aleatory, like the antic questing of Herbert Stencil in
Thomas Pynchon’s V. (1963), the overarching narrative is driven by a search for sense, frequently governed by associated sounds, puns and repetitions.

The performances at Witte de With affected a generosity towards the audience, although they sit uneasily within the tradition of storytelling. Vonna-Michell’s method of staging is confrontational, even manipulative, not least because the artist’s hybrid accent and quick patter often veer close to that of an Essex wide-boy, a conman who doesn’t care much if he is exposed. For the duration of the residency Vonna-Michell traveled to Rotterdam every other weekend yet remained absent from the installations even on those days he was in the city; visitors had to request a performance via a gallery assistant and then, in the manner of some circus side-show, were handed a plastic egg-timer and asked by the artist how long they wanted the tale to last. However, in such instances, less control is relinquished to the listener than is claimed; an older piece such as hahn/huhn is now so well rehearsed that if the requested duration is actually adhered to, it is down to little more than chance. Swaths of curious learning and esoteric research thwart the listener’s recollection, the delivery accelerating until sense unravels to a percussive babble, well-rehearsed stories teetering as the premeditated is overtaken by the contingencies of performance. To carve these too-pat tales, Vonna-Michell’s elision is both aggressive and meticulous; like John Dowell, Ford Madox Ford’s unreliable narrator in The Good Soldier (1915), the artist prompts more questions than he answers, and lacunae are only realized once the story has ended.

By splicing the lived with the learnt, Vonna-Michell’s stories and actions form a personal analogue to that monumental act of dispersal and investigation: the large-scale destruction of documents by Stasi officials in 1989, and the new government’s subsequent commissioning of archivists (nicknamed ‘the puzzlers’) to reassemble the mountain of some 600 million scraps. For a month in 2005 Vonna-Michell holed up in a GDR-era Leipzig bed-sit alone with his personal archive of photographs, taking 36 exposures of each image before painstakingly shredding each one by hand. This fragmented portfolio was later presented at his Glasgow School of Art degree show, the resulting photographic slides now used in performance, mementoes of a partial re-enactment and an end-point to his earlier body of work. Other objects that Vonna-Michell uses in performance have an insufficient and temporary quality: in hahn/huhn, a conspiracy thriller that ducks into the tunnels rumoured to lie under Berlin’s Anhalter Bahnhof, three blocks of dry ice squat in a line between artist and listener, chilling the feet and offering a shonky reminder of the Cold War and the Berlin Wall; episodes in Finding Chopin are represented by a newspaper clipping, an egg carton and a stick of rock. So ephemeral are these carefully gathered props that many were allegedly stolen during an exhibition in Brussels in 2006, after which the artist replaced them with a seven-inch vinyl recording, Short Stories & Tall Tales (2007). The record is the only saleable item Vonna-Michell has produced to date, the token of a failure to maintain an archive that yet gestures towards the continuing possibility of circulation. An archive attempts a totalizing collection of information, but what if, as in the case of the Stasi, it is kept safe or destroyed, hoarded or dispersed? Vonna-Michell’s practice reflects on the possibility of recording and transmitting history through the spoken and written word, tracing the associative complexities of how histories and rumours are told.