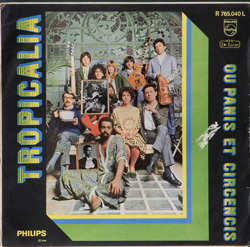 ‘The myth of “tropicality” is much more than parrots and banana trees,’ warned Hélio Oiticica, the year after his environmental installation Tropicália (1967) helped inspire the explosive cultural movement of that name. In Tropicália he aimed to topple universalizing ideas of Brazilian culture by addressing the problem of the image, setting two of his shanty-like ‘Penetrables’ in a tropical scene with sand, pebbles and macaws, one of them a claustrophobic labyrinth whose single dark corridor leads to a television set. Eden (1966), in which one steps on sand, crushed brick and straw through favela-like enclosures, avoided imagery, but Tropicália’s ideas had been unleashed.

Oiticica’s still-powerful and influential installations are the beating heart of ‘Tropicália: A Revolution in Brazilian Culture’, the first exhibition dedicated to the array of vibrant nonconformist tendencies associated with Tropicalism.
The moment was brief. Tropicalism burst forth in 1967, when Tropicália was shown at the ‘New Brazilian Objectivity’ exhibition at Rio de Janeiro’s Museum of Modern Art and Caetano Veloso and Gilberto Gil released Tropicalist songs, among other developments. It is generally agreed to have ended in 1972, when Veloso and Gil returned from exile abroad, and the poet and journalist Torquato Neto committed suicide. But its impact was enormous, and the curator of this show, Carlos Basualdo, attempts to convey its complexity as well as its history. In the mid-1960s social and aesthetic concerns converged.

Oiticica’s art acquired a participatory dimension after he began living in Rio’s Mangueira favela, where he became a lead samba dancer and developed his Parangolés – banners or capes brandishing colour, geometry, expressive materials, words. He and others embraced Oswald de Andrade’s 1928 ‘Anthropophagous Manifesto’ and its delirious vision of a cultural cannibalism in which Brazilians devoured foreign influences rather than being colonized by them. The São Paulo-based Oficina Theatre’s 1967 production of De Andrade’s play O Rei da Vela (The Candle King), incorporating low-culture sources such as circuses and variety shows, was a Tropicalist touchstone that, like Tropicália, engaged antropofagia. The innovative exhibition design featured scaffolds, reminiscent of the play’s sets and of concert stages, onto which visitors stepped to view a model, sketches and projected stills.

A fraught political climate both spurred on Tropicalism’s development and ensured its decline. In December 1968 the governing military regime in Brazil, having seized power in 1964, enacted the Fifth Institutional Act, legalizing state censorship and repression. Veloso and Gil were gaoled and later expelled from the country; others suffered imprisonment, torture and murder. Television, a vehicle for government propaganda and a space for resistance, was referenced in music and movies. Avant-gardist filmmakers also drew on the kitschy chanchada films that followed the mid-century migration to urban areas and the explosion of favelas. Carnivalization meets antropofagia in Joaquim Pedro de Andrade’s brilliant farce Macunaíma (1969, based on the eponymous 1928 novel by Mario de Andrade), a mega-dose of Tropicalist hybridity that engages crude stereotypes with anarchic wit. Macunaíma’s anti-hero, travels from jungle to city, where rural culture collides with urban guerrilla warfare. Guests at a feast are fed to other guests, and Macunaíma himself is eventually devoured: in the filmmaker’s vision a man consumed by his own country.

An unexpected ingredient is the show’s inclusion of contemporary works responding to Tropicalism. Basualdo writes: ‘The intention was clearly not to establish a relation of continuity with the features that characterized Brazilian culture at the end of the 1960s, but rather to interpret them in relation to the contexts in which the work of these artists and musicians is now created.’

Thus Rodrigo Araujo’s humble vendor’s stand, equipped to sell images instead of bus tickets, revisits the intersection between underground strategies and mass culture in Tropicalism through a 21st-century intervention. A self-adhesive mural by assume vivid astro focus, whose work is strongly influenced by antropofagia, is typically expansive and psychedelic, devouring and regurgitating imagery such as the Tropicalist motifs in dresses, album covers and posters displayed nearby. Matthew Antezzo created tapestries, depicting figures associated with the movement, that reaffirm the centrality of print media and television to Tropicalist activity; the Bronx show included one celebrating the comic TV personality Chacrinha. And Rivane Neuenschwander contributed an interactive work – based on Walt Disney’s Zé Carioca (Joe from Rio) parrot cartoon – in which visitors could write their own dialogue in speech bubbles with chalk.

Although provocative, these works seemed to remain on the fringes. It may be too much to expect them to compete with such radical achievements and such a pungent historical context, although they do enrich the show by helping to define the legacy of Tropicalism, which can be fiendishly difficult to pin down. One contributor to the catalogue, anthropologist Hermano Vianna, even goes so far as to propose that ‘the true Tropicália’ has yet to be invented. Perhaps he’s right.