In this regular series, frieze d/e picks out favourites from the ebb and flow of culture

Black, ridged and almost claw-like, this five-centimetre-tall object is reminiscent of a charred leftover of Bleigießen (a German fortune telling tradition of melting little lead figures on New Year’s Eve and interpreting their final form to see what the year will bring). It is, however, an exhibit from the Mineral Collection at the Museum of Natural History in Berlin – a particular naturally formed silver, the so-called Silver Curl. These shapes form under unique chemical and physical conditions within cavities of silver-bearing rock. Like silverware, they are prone to oxidation and can turn black. Silver curls are coveted treasures for collectors. Interestingly, as easily as perming hair in a salon, silver curls can be faked and these are relatively difficult to detect. Apparently, the majority of fakes come from Morocco; presumably from kiln-fired, silver ore. Whether or not the silver curl pictured here is real remains a mystery, even the experts at the museum are unable to know definitively. Luckily, this does not prevent it from being displayed. KA
Translated by Arielle Bier 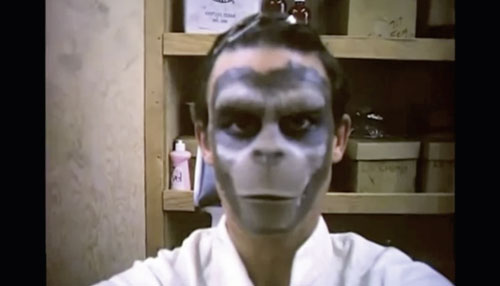 Perhaps even more surprising than the out-of-the-blue single released by David Bowie Where Are We Now? on his 66th birthday in January, was how little time it took for a cover version to bob to the surface of the internet. Bowie’s laconic, nostalgic song about the Berlin he knew from his time spent there in the 1970s (and the slightly creepy, funny and sweet film made by Tony Oursler in his New York studio, featuring grainy black and white footage of Berlin and Oursler’s trademark balloonish, floating faces – of Bowie and Oursler’s wife, the painter Jacqueline Humphries) triggered another former Berliner, Scottish pop artist Momus, to make what’s been called the fastest cover in history, posting his version a mere 9.5 hours after the release of the original. On his website he shows his working out, going step by step through the production process, sampling a number of other Bowie songs as well as Aphex Twin’s 2003 remix of Heroes. Uploading the song to YouTube with a clip from a home movie belonging to Roddy McDowall of makeup artist Don Cash transforming him in 1968 into Planet of the Apes character Cornelius, needless to say the Momus remix went viral, as did the news that it went viral. As did the meme for the cover art of Bowie’s new album The Next Day, a conceptual-esque refix of his earlier Heroes cover. Where are we now? PT 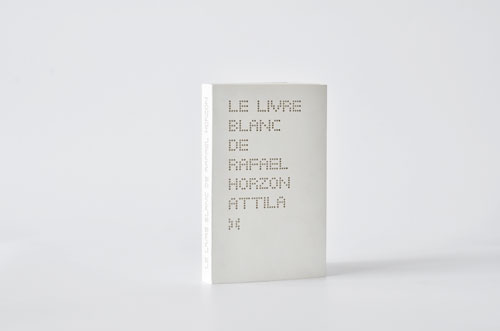 ‘The great thing about Horzon is that his this-is-not-art trick is such an elegant example of what every artistic avant-garde of the last hundred years has been about: the dissolution of art into life.’ This comment was posted online by a certain ‘Klaus Lüber’ in response to a recent piece about Rafael Horzon on the popular German culture blog umblaetterer.de. And it sounded good. But finally, the hubbub of claims and rumours surrounding Berlin’s best-known shelf-maker and concept prankster became irksome, and it was hard to believe anything anymore. Supposedly, he was shutting his shop for shelving on Torstrasse, having switched to investment banking: the shop stayed open but started selling kitchen sinks. Alledgedly, Me, My Shelf and I (2012), the single by Wolfgang Amadeus Horzon featuring Peaches, was number one around the world, yet no sign of it in the charts. According to the blurb promoting the song, Horzon’s novel Das weiße Buch (The White Book, 2010), in which he recounts his early days as the King of Torstrasse, is a global success. Perhaps not – but still: Horzon’s publisher Suhrkamp has indeed sold translation rights in several countries: Le livre blanc de Rafael Horzon (Attila, 2011) and Il libro bianco (Scritturapura, 2012) have already appeared. Serbian and Dutch translations are in the making. They probably won’t be big sellers, but their very existence is a success in itself. JK
Translated by Nicholas Grindell

What does one do when called upon through the Internet to look at particular climatic tracings in Satellite images from the South Pole of Mars? Join in, of course! Dry ice fog, endless smooth surfaces, gas geysers! When is someone finally going to film a spec­tacular pop video there? Michael Jackson would have jumped at the chance in a heartbeat. These images look like even God once wanted to try out being an abstract painter and did so on the red planet (including batik, airbrush, and gestural brushstrokes). However the mundane business of scientific image capturing – part of ‘Zooniverse’, a ‘citizen science project’ produced in collaboration with the BBC – is of a different kind. In the satellite photos, the gas jets appear like characteristic dark spots, and the voluntarily enlisted community is prompted to index these spots with vector graphs on the website planetfour.org. From this accumulated data, the Mars-meteorologists can try to decipher climactic conditions. The identification of the spots is apparently too complex for computers which is why the scientists requested help. Considering the cunning developments of facial recognition programming today, one is tempted to ask, are computers actually this stupid? Even so, a nice excuse to look at softly painted, endless, abstract surfaces! JH
Translated by Arielle Bier