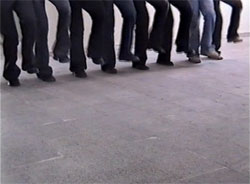 In titling their show ‘The Pantagruel Syndrome’, after François Rabelais’ satirical giant, co-curators Francesco Bonami and Carolyn Christov-Bakargiev made no secret of their epic ambitions for the new Turin Triennial. Pooling the resources of the Fondazione Sandretto Re Rebaudengo, the Galleria Civica d’Arte Moderna e Contemporanea and the Castello di Rivoli Museo d’Arte Contemporanea, they showcased 75 artists, with Doris Salcedo and Takashi Murakami accorded small solo exhibitions.

Ten far-flung ‘correspondents’ foiled the more predictable choices these surveys often present; the cull of ‘Pantagruelists’ admirably drawn from far beyond Europe and the US. The result ranged widely, if not always judiciously: too often Rabelais’ avid insatiate inspired mere excess rather than scope and power.

Many of the exceptions were videos. Ryan Gander’s Is This Guilt in You Too (The Study of a Car in a Field) (2005) is a small, off-kilter video of a parked sedan, engine running, set in a snowy field ringed by mountains. No tracks indicate how it arrived there, but as soon as you take in the image the screen goes black. Meanwhile a girl’s voice-over responds to unheard questions about the car, her speculations reflective of the disquieting doubt Gander expertly sows, his seemingly benign loop creepier with every reappearance. More bizarre were Brian Fridge’s ‘Vault Sequences’ (several videos made between 1997 and 2000), meticulous archives of the vaporous world inside his freezer, but which seemed instead to have come direct from the Hubble telescope. In Fikret Atay’s Fast and Best (2002) a group of young people performed a percussive folk dance, the camera trained only on their legs, the effect abstractly militaristic. There were resonances with Miguel Angel Rios’ ’Til Death (2003), three simultaneously running videos documenting the Mexican game of spinning tops. Shot at nearly ground level, the hurtling pitch-black figures looked like armless men, their amplified sound as chilling as ordnance.

Other highlights were simple recasts of familiar objects, such as Richard Hughes’ sad sculpture I Wanna See You Sweat (2005), which features a well-worn black Puffa jacket, its sleeves slung from a row of wooden hooks to make a V sign. Exceedingly simple and unexpectedly intriguing was Ulrike Palmbach’s Cow (2004), a bovine odalisque composed of a cream muslin and fibre-fill, its earless and hornless head eerie in its massive and bossy awkwardness. Jennifer Allora and Guillermo Calzadilla recycled industrial machine remnants to make Ruin (2004), from perforated and hinged parts that mostly lay across the floor. The piece never surrendered its ‘ruinous’ quality. Damián Ortega’s three-part progressive undoing of a Vespa (whose whine is virtually Italy’s aural signature) terminated in the complete suspension of its parts on fishing wire, making Italian Miracle (2005) both engaging and ridiculous .

Mikhael Subotzky’s ‘Four Corners’ (2004) is a series of documentary photographs made in Pollsmoor, a high-security prison near Cape Town, South Africa. By cobbling together digital snapshots he took during a stint teaching photography to the inmates Subotzky created panoramas whose arches and spherical shapes suggest the timeless hell of Giambattista Piranesi’s prison engravings. Restraint of a different sort featured in Thom Johnson’s Standing Date (2005), in which the artist displayed his own head on a steel surface, the rest of his body encased in a box below. Looking a little like a post-Judith Holofernes, Johnson was as much at the mercy of passers-by as a source of entertainment.

In addition to a selection of older work, Doris Salcedo made the site-specific Abyss (2005) for one of the larger galleries in Castello di Rivoli. Leaving the gallery bare, she blocked off its walls from the top down, with only limited portions of the white walls and the French windows visible at the bottom, her new bricks blending with the 18th-century domed ceiling. It felt like the foot of a bricked-over well, the ordinarily reassuring smell of mortar becoming sinister and the emptiness constraining and claustrophobic.

The Murakami mini-retrospective included examples of his sexually frolicsome sculptures and an entire room devoted to his artificially intelligent Inochi (2004), which looks like a cross between Pinocchio and E.T., his sweetness beautifully perverted by the gnarled monstrosities of his adult-sized feet. Murakami made one new piece for the show, The Emperor’s New Clothes (2005), a whimsical exaggeration of a self-portrait, and its exuberance gave the show a welcome giddiness. There is no question that art should reflect the admittedly bleak state of things, but too often the ‘Pantagruelists’ settled for telling us so in terms as flat-footed as they were obvious.