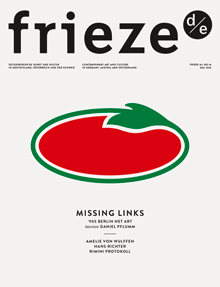 You’re an artist and you find yourself at an opening when Francisco de Goya taps you on the shoulder and tells you your opening at Kunstverein Hannover is just about to start. Oh no, you think, maybe you’ve forgotten to install anything. Plus you’ve forgotten to wear any underwear and your coat keeps falling open. As you arrive at your show with Goya, the Kunstverein is crowded with a public eager to see your work: there’s your name in huge letters over the door, and waiters with trays handing out cocktails but – the horror – you were right, you forgot to install your work and everyone is looking at you. By this time you’re pretty much half-naked. What is Goya going to think of you?

If this sounds like some kind of bad anxiety dream how about these: instead of being included in Documenta, your non-artist sister is, and when you get there and are asked to weigh in, your ass is too large and you become the laughing stock of the art world, none of whom recognizes you. Or you tightly embrace a famous artist out of admiration and accidently break her neck and kill her. You have no choice but to hide the body. The police are on to you – what do you do? Better call Goya to see if he’ll meet for one last glass of wine before you are inevitably hunted down.

These are sketches taken from Amelie von Wulffen’s latest pencil-drawn comic book, Am kühlen Tisch (At the Cool Table, 2013), which, as well as a publication, has recently taken the form of an installation at Kunstverein Munich and a projected slideshow at Portikus, Frankfurt. Each episode, roughly and smudgily rendered with apparent speed, takes the form of an anxiety dream, with its peculiar attendant narrative qualities: plot twists and bizarre scenarios are accepted without question; dramatic events appear as though one might have had a memory lapse (oh, I forgot, I killed someone / had a baby / had a show to install at Kunstverein Hannover). These quasi-confessional fictional narratives are not only a set of revealing comic portraits of the anxieties of the artist herself but a glimpse into the fears and faults that form a kind of art world unconscious – the arena in which these vignettes take place, albeit in mutated form. It doesn’t take a psychiatrist to pick apart the kinds of angst that would give rise to a dream scenario, say, in which an artist is trying to give a hot male gallerist a blowjob and then realizes – ‘eek, that’s cold and sour’ – and that she has been sucking on a wine bottle instead.

This shifting world-space that depicts both a known art landscape and something far more uneasy is also conjured in Von Wulffen’s larger-scale oil paintings that she has been creating over the past two years, a series of which was shown in her recent solo exhibition at Portikus. Figurative depictions of painters from art history appear such as Gustave Caillebotte, Gustave Courbet, Albrecht Dürer, Vincent van Gogh, Goya and Georges Seurat. Goya, for instance – who features regularly in recent work, and has a central role in Am kühlen Tisch as a kind of spirit guide or confidante – always appears in the stubby black top hat which he wears in his own painting Self Portrait in the Studio (1790–95). In Von Wulffen’s redux, these painters are pictured in the same poses that they depicted themselves, presumably in front of a mirror. And yet other spaces or types of painting co-exist with the portraits. In Goya’s case, an abstract set of overlapping squares in mustard-yellow and ketchup-brown shades enter the canvas from the bottom corner, whilst large flying insects painted in trompe l’oeil style look as though they are crawling across the surface of the painting. In Caillebotte’s case, Self-Portrait at the Easel (1879) is being infected from the edges by a cheery sky-blue space decorated with downward streaks, applied with a flat-edged implement, in celebratory pinks, whites and yellows. Max Beckmann gets impressionistic sailing boats lit by a rosy sunset. These are awkward juxtapositions, in which two painterly realities peek out through tears in the spatial logic of the work, creating what Von Wulffen describes as a ‘cheap atmosphere’1 – one which knowingly draws both on the kind of paintings that one might find in a hotel room, as well as the queasy position of the fan girl who makes pictures of her idols in an effort to get close to them – image making driven by pure devotion.

The painters – as well as the slices of famous paintings that the artist appropriates in her works such as dead hares or fish from various still lifes – appear unmoved, out of time. Von Wulffen creates the impression of a continued phantom existence for these works and tropes, lived out in the paintings and prints that adorn the walls of hotels, bourgeois living rooms, restaurants and offices. Every painting, from those found in flea market to museum, conveys something, even if what it conveys is ‘sick’, in the artist’s words. It might be suggested that just as she gives the art world’s unconscious a voice – in Am kühlen Tisch or the earlier comic November (2011) which included contemporaries from the artist’s own Berlin milieu – in her larger canvas works Von Wulffen makes visible a subconscious of painting that is played out across a terrain larger than the art world’s own institutions and historical canon. One that includes the cold, corporate images found in office lobbies, the kitschy, folkloric landscapes adored by the Nazis and amateur forms of production such as ‘Sunday painting’ or ‘outsider’ art. Though this is painting looking back at itself, feeding on its own history rather than from any other reality, the adoption of ‘bad’ painting techniques provides a line of escape for the artist into a different form of the real. This was accentuated in the Portikus exhibition by a set of plain wooden chairs in the centre of the space – mostly with the head of an artist on the seat and a more decorative element on the back – creating an alternative viewing space that gestured to the sitting room more than the art gallery.

In cutting out elements of historical painting – such as heads, fish and food – there’s a dismembering that takes place in Von Wulffen’s paintings which emerges from a preoccupation with still life. As Von Wulffen says to Goya when he comes to her studio in Am kühlen Tisch: ‘still life is actually a totally splattered dismemberment of the world. Cut-off animal heads and everything else is carved up into mouth-sized pieces. And people are also dismembered into eyes, hands and mouth. It’s about perfect illusion.’ Rather than edible chunks cut out of reality, we have slices cut out of paintings. Von Wulffen’s painters, staring into the mirrors in their studios are reflected back at us in the 21st century in spaces cracked, fractured, and schizophrenic.

This twisted approach to the edible is also employed in a comic-style series of watercolours entitled This is how it happened (2010), named after a plate from Goya’s The Disasters of War (1810–20), featuring edible protagonists such as bananas, tomatoes, potatoes, ice lollies and sausages alongside tools such as screws and hammers. Whilst some of the paintings are gently bizarre or awkwardly playful – a nervous ice lolly racing down a mountainside on a single ski attached to its wooden stick leg (all works Untitled, 2010/11), a group of vegetables attempting gymnastics – others are decidedly black in their humour: a pear being sucked off by an obediently kneeling carrot in a lobby or hotel room, as a banana and a strawberry look on, masturbating. Or a torture dungeon in which knobbly potatoes subject poor submissive tomatoes to violent sex acts (tomatoes always seem to get a raw deal in Von Wulffen’s works). These watercolours draw on an aesthetic that immediately recalls the sweet, surreal breeziness of children’s books, but also tap into the repressed anxieties of childhood or those of plainly adult experiences, awkwardly encouraging the two spaces to co-exist, taking glee in saying precisely the wrong thing at the wrong time.

A molar tooth makes its way down a pathway supporting itself on crutches, the city rising in the background, its gigantic eyes with long spindly lashes looking affrontedly at the viewer, heavy with sadness (Untitled, 2010). Here is the adult, painterly counterpart to the smiling tooth seen in dental surgeries the world over, encouraging children to take care of their own. Our sad tooth is seen here on the inevitable journey through adulthood, suffering the inevitable injuries and decay that will worsen as time goes on. There’s no answer to the question on the tooth’s big plaintive face, which is, essentially, ‘why do I have to die?’

It’s a comic picture all the same. While dental hygiene is certainly a good thing to learn, it is also true that ultimately, eventually, there are no ‘safe’, hygienic spaces that can keep out harsh and strange realities or undesirable scenes: these can only be repressed. Childhood bleeds into adulthood, life into art, paintings into one another, dreams into waking life. Neat compartmentalization is a folly; one that can’t be continued after childhood. Yet, as time goes by, and the strands of one’s life tangle and disturb one another, maintaining any clarity seems near impossible. ‘I did always ask myself’, Von Wulffen says to Goya, ‘how you could be an existentialist, a court painter and a social critic as well’. ‘Ah child’, Goya replies, ‘that is a long story. I will tell you one day but not today.’

1 All quotes taken from an interview with the artist, February 2014