Robert Colquhoun and Robert MacBryde’s entwined life story would make the saddest film you’d ever see. Working class art students meet in Glasgow, fall in love. Carouse. Move to London. Garner admirers, attract famous friends, become celebrated. More carousing. Move to the country, nanny a friend’s four small children in exchange for their keep. Carouse, carouse, carouse. Penury. Colquhoun’s heart stops; he expires in his lover’s arms. Four years later, MacBryde is killed by a car whilst dancing outside a pub in Dublin. Both are barely either side of fifty.

Perhaps this tragic tale tells little about the two Roberts’ work, but it does say something very significant of the fatal vagaries of fashion, the key role of taste in the art market and how easy it is to lose all your money trying to have a good time.

The Two Roberts is the first major retrospective of Colquhoun and MacBryde, including paper, paint and print works spanning 30 years and a goodly range of biographical archive. Despite usually being photographed together and referred to by a collective nomenclature, Colquhoun and MacBryde were creative partners only in the sense that they lived, drank and thought together, collaborating rarely and on work usually outside of the studio context, such as the accomplished graphical set and costume design for Léonide Fedorovich Massine’s ballet Donald of the Burthens at Sadler’s Wells, London, 1951.

Their friend and Notting Hill neighbour, Wyndham Lewis, reviewed their joint show at the influential Lefevre gallery in London in 1947, writing: ‘Their work is almost identical and they can be regarded almost as one artistic organism.’ I disagree with this, seeing their individual practices as distinct from each other, but not from themselves. Two streams are clearly evident – one belonging to each artist – separate Gordian knots twined in motif, frame, pattern, static across decades, making it impossible to decipher personal artistic development from post-cubist Glasgow, or to locate their interaction with the external world and clock-time. 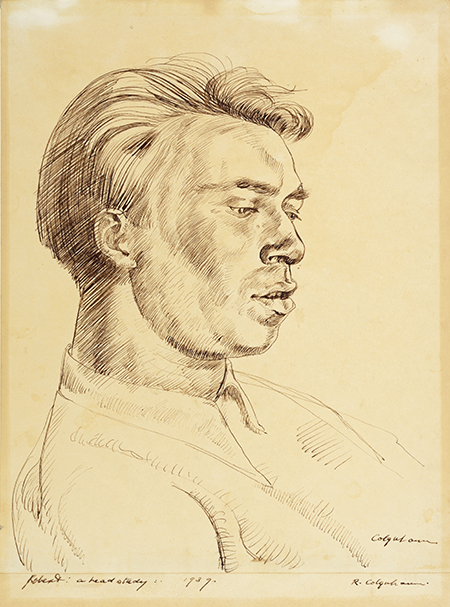 Colquhoun is always credited as the dominant talent and, indeed, his draughtsmanship is so startling, poppingly precise and intellectually alien, that his talent exposes itself even in his first student work, a beautiful watercolour, The Unmade Bed (1933), worth at least selling three quarters of your mortal soul to secure as your very own.

MacBryde’s line is certainly not as definitive or thrilling, but his substratal sense of pigment and thematic insistence on the buoyancy of the object is as persuasive and as weighty as cupping his big round head in your hands. Still Life With Cucumber (1948) is flat and formally somewhat thuggish, but equally charming and sly: MacBryde iterates cucumbers, ripe splitting fruits and darkly dimpled holes with creamy insistence and fierce alacrity. Let us not forget that ‘homosexual acts’ were only made legal between two men over 21 years of age, and ‘in private’, in England in 1967 (and in 1980 in Scotland). As MacBryde’s account reports, when the pair met Sir Kenneth Clark (Director of London’s National Gallery from 1934–45), he observed of modern art: ‘You hear about it, the way you hear about homosexuality, but you never come across it’ – a comment as inadvertently amusing as it is deeply obnoxious. Interesting, then, to note MacBryde’s canvases often feature a muddy shadow looming over the picture plane, suggesting that a figure is always watching, just out of view.

Throughout the years, as default seemingly autobiographical subject matter, Colquhoun mainly favoured painting male pairs in gestured discourse, men whose features are mapped from his own and MacBryde’s. Later works, such as his monotypes on paper, holding stark fractured figures in space, are economical in that they are much cheaper to produce than oil on canvas and, more importantly that they flay the surface of production to the utility of simple line.

An aching film made in 1959 by Ken Russell – one of his earliest works for the BBC series ‘Monitor’ and screened to great effect as part of the exhibition – documents 11 minutes of the two Roberts in ‘elegant’ monochrome poverty in a rural cottage in Suffolk. They are filmed arriving in a horse-drawn cart carrying paintings to work on in their studio in a hokey nostalgic set-up. MacBryde cuts an oval out of newspaper, daubs it a ‘screaming kind of yellow’, applying it to the canvas surface to begin Still Life With Melon (1959). A close-up of Colquhoun’s hand shows it trembling terribly whilst applying detail to his portrait Circus Woman (1959): the sureness of line betrayed by the weakness of the body. Both paintings are hung in close proximity to the film for close inspection. This temporal suture is very affecting, not because of the power of memoir, but because of evidence of individual process.