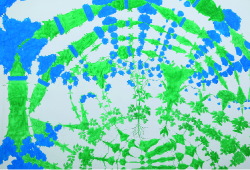 No two eggs are the same, as the saying goes. But no two things are quite as similar as two eggs. 'Compared to the similarities that are consciously perceived, in faces for example, the countless similarities that are perceived unconsciously or not at all are like the huge submerged block of the iceberg compared to the tip one sees protruding above water.' This imbalance, described by Walter Benjamin in his very short essay 'Doctrine of the Similar' (1933) seems to be a driving force in the work of Frankfurt-based Udo Koch. Using reflections and other forms of image manipulation, he pushes the similarity of forms found in nature to the point of estrangement.

This exhibition, with a retrospective structure featured just a few groups of works, and made apparent Koch's search for the fine line separating the same from the similar. Many of his works from the past decade are based on the outlines of plants. He takes them from 'florilegia', the illustrated books from the 17th and 18th centuries in which the botanists of the period attempted to portray nature as a perfectly ordered system. Koch takes the same goal and exaggerates it. He draws a line through the centre of the profile of a flower and mirrors the two halves in it, then repeats this procedure with the succession of new forms generated out of the original shape. The surfaces are then coloured to match the natural model. The resulting large-format watercolours have a blossoming effect and beautiful, strange-sounding titles, such as Gefüllter, tiefblauer Gartenrittersporn (Filled Deep-Blue Rocket Larkspur, 2000) or Orangerotes Habichtskraut (Orange Hawkweed, 2001). Koch positions the mirror axes in such a way that the overall shape produced is the epitome of regularity and uniformity - almost always everything appears to be arranged in a circle. Even when the large format is not large enough, at least sections of circles are formed.

Koch forces similarity by extending, enlarging and stretching the individual natural outline into the objective geometrical one. The fact that he does not dispense with the category of beauty is felt in his amazement at the irreducible uniqueness of each plant specimen and by his choice of medium. The water-colours turn each detail into a many-faceted element of a larger overall form, whose power of generalization is undermined by the subjectivity of the painter. But this too is subjected by Koch to a new process of transformation - the leap into three dimensions, into sculpture. A key work here is Blutfarbene Lilie (Blood-coloured Lily). After originally drawing it in pencil and felt-tip pen on translucent paper in 1992, five years later Koch went on to build it: held together by a fibreboard framework, sculpted polystyrene blocks are stacked to form a hollow form, the negative of the flower's blossom. The sculpture appears rough and unfinished, really just a mould waiting to be used to make a positive image of the flower. But this will never happen: the similarity that so fascinates Koch would be destroyed, the result something immutable: a manufactured product.

Today Koch is trying to find out how fine this line is by transferring Blood-coloured Lily into the digital realm and commissioning virtual 3D renderings - Blutfarbene Lilie (Segment) (2003). The charmlessness of the new works compared with their 'analogue' predecessors is matched by Koch's apparent distaste for this approach, causing him to stand back and name the software operator as a co-author.