The Anthology Film Archives in New York will soon release the second volume of a vast bibliographical project about the radical and influential filmmaker, Maya Deren 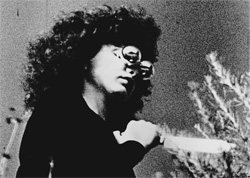 ‘Please return.’ The request is neatly penned across Maya Deren’s papers and articles, which she loaned out to friends from the tottering stacks that filled her cramped Greenwich Village apartment. Parties lasted into the night, cats wound their way around innumerable trinkets, and the landlady balked at the disparity between Deren’s demands and the rent she paid. A letter of 20 November 1959 – two years before the experimental filmmaker’s death at the age of 44 – begins: ‘Dear Miss Deren: You now seem to be labouring under a new set of delusions…’. Later, Deren wondered if the other apartments could not use electricity from the main fuse while she was screening her films.

Deren’s copious papers, to push the metaphor, are indeed returning to the public eye. After 30 years, the Anthology Film Archives in New York will publish the second volume of a vast bibliographical project, The Legend of Maya Deren. Begun at Berkeley in the 1970s by three American academics – Vèvè Clark, Millicent Hodson and Catrina Neiman – the project is a ‘documentary biography’ that collects and publishes all material relating to Deren, ranging from her letters, articles and notes to sketches and exegeses of her films: a variorum-cum-archive. Signatures and Chambers (1988), the first volume, ran to 1,200 pages and deals with her childhood in Kiev and her school years, as well as her time within the New York avant-garde of the 1940s, when she made a series of short, silent 16 mm films that were largely without precedent in the USA. The second volume, Ritual, comes out later this year and addresses what many see as Deren’s detour: her work as an anthropologist in Haiti, where she documented and examined the rituals of the Voudou religion. (A third, covering her final years with her third husband, is forthcoming.)

The Legend project bears the feminist spirit of its inception; it was spurred on by the lack of detailed scholarship on Deren in particular and by the more general desire to redress the problem of the historical scarcity of women artists and filmmakers. The books’ collective authorship displaces the singular voice of the literary biography, leaving the reader free to make his or her way through the overwhelming amount of bibliographical material collected. It’s an interesting project, particularly as Deren has never been lacking in popular attention; the biographical documentary In The Mirror of Maya Deren came out in 2002 and Meshes of the Afternoon (1943), her first film, is said to be the most frequently screened avant-garde film of all time. But it astutely gauges a large problem faced by any kind of scholarship in a marginal field: the fact that much of the material consists of ephemeral items such as manifestos, flyers and invitations, is published in out-of-print or discontinued journals, or is simply known and not written down.

Deren’s films of the 1940s were a bridge between the tightly controlled exercises of early European avant-garde film, whose production had mostly stopped during World War II, and the improvisatory, personal cinema of the New York and San Francisco avant-garde of the 1960s. The work was serious and ambitious: Deren aimed for the measured rhythm of myth and ritual, and her remit was the expression of universal truths. Although links can be made between, particularly, her enactment of the ‘trance’ film, which depicts a psycho-sexual quest, and later filmmakers, for whom this model was seminal, Deren is above all a Modernist filmmaker, concerned with the integrity of form and medium.

Her most long-lasting contribution is less her personal artistic legacy than her help in establishing avant-garde film as a discipline: her screenings at New York’s Provincetown Playhouse helped create the pattern of self-produced, one-off screenings that would constitute the infrastructure of experimental film, growing into Amos Vogel’s Cinema 16 and the London and New York filmmakers’ co-operatives. In setting up organizations such as the Creative Film Foundation, Deren began the trend of self-financed production, and through articles in the press she, like Jonas Mekas, championed the new non-narrative ‘art film’. But if she is the godmother of experimental film, she was a tempestuous, cantankerous, bullying one; the stories about her are wild and often challenge credulity. The poet Charles Duits once ran from Deren’s flat in terror, thinking he saw hair on her chest, and Anaïs Nin fell out with her after seeing Ritual in Transfigured Time (1946), in which Nin performed alongside Marcel Duchamp and Gore Vidal; Nin said Deren’s camera had a unique ability to ‘uglify’. Jane Brakhage Wodening, the former wife of Stan Brakhage, writes that Deren became possessed by the Voudou god Papa Loco at a wedding and threw a refrigerator across the room. Later, having been restrained by the other guests, she put her hands into a fire and, flinging blue flames, blessed Brakhage – who feared for the fate of his only nice suit.

Name-changes mark the stages of Deren’s life. Born in Kiev in 1917, she was called Eleanora Derenkowsky at birth. Later, in the American immigrant pattern of foreshortening and Anglicizing, she changed her surname to Deren, then her first name from Eleonora, with its steppe-dappled diminutive of Elinka, to Maya – Hindu goddess of illusion – when she became an artist. While working with Katherine Dunham’s dance company in 1942, Deren met the Czech filmmaker Alexander Hammid in Los Angeles; they married quickly and soon thereafter made Meshes of the Afternoon (1943), which expresses, in its highly intricate narrative structure, the fears and anxieties of marriage, sex, death and love. Time in the film doubles and triples up on itself: Deren, looking out of the window in a house, sees her own figure walking up the path and through her door, a sequence that recurs with slight differences three times. Disorientated, she travels upstairs to see the figure of death over her marital bed. Ultimately Hammid returns home to find Deren lifeless in a chair, her face stabbed by a mirror. The image on screen then fractures like a pane of glass, and an expanse of sea fills the screen, into which Deren walks away from her lover.

Meshes of the Afternoon and At Land (1944), her two first films, exemplify Deren’s most dramatic technique: the use of editing to effect spatial and temporal elisions. In At Land Deren steals a chess piece from a game being played on the beach and climbs up a gnarled piece of driftwood. In a seamless transition the next shot shows her lifting herself onto a long table, where an animated dinner party is in process. She crawls among the gesturing guests and travels through a series of disparate scenes – beach, interior, forest – before finally disappearing. Her use of dance in subsequent films more fully exploited cinema’s capacity for spatio-temporal freedom. In A Study in Choreography for Camera (1945), which runs for only four minutes, the dancer Talley Beatty makes a continuous leap from one locale to another, beginning in a wooded glen, touching down in the Egyptian hall of the Metropolitan Museum of Art and ending, in grand plié, overlooking a river landscape.

Deren’s belief in the overriding importance of film form was laid out in An Anagram of Ideas on Form, Art and Film, which she wrote when she was 26 but was not published until 1946. The work both lays out her personal poetics and attempts an ontology of the art film, much as André Bazin and Siegfried Kracauer were doing for realist cinema. Like these, An Anagram of Ideas on Form, Art and Film is largely prescriptive, motivated by concerns of medium-specificity: the idea that each medium is best suited to one form of expression and that it has a duty, often weighted as ethical or moral, to take this shape. Cinema’s unique attribute is its ability to manipulate space and time and, as Deren writes memorably, ‘to put real toads in imaginary gardens’. She attacks narrative and documentary film for simply reproducing reality; the function of film is above all creative, and should evoke the ‘experience of reality rather than reality itself’. These injunctions were demonstrated with an admirable consistency in her own films, which attempt to distil experience into concretized, and universalized, expressions. Ritual in Transfigured Time (1946) portrays a cocktail party as an elaborate dance, with stylized pas de deux and glissades representing banter, greetings and snubs. This highlighting of the rituals that underlie social activity allies Deren with Surrealism in a different way from the one possibly suggested by Meshes of the Afternoon: Deren’s Surrealism is that of Jungian archetypes rather than the personal confessions she saw as motivating much figurative painting, and against which – perhaps because Meshes of the Afternoon was often interpreted along those lines – she inveighed strongly.

Deren’s interest in ritual brought her to Voudou in Haiti, which she visited in 1947 after receiving the first Guggenheim grant for creative filmmaking, with the intention of making a film comparing Haitian religious rituals to those of the secular West, such as ceremonies, masquerades and children’s games. She never completed the film, but she published an analysis of Haitian cults in 1953 in Divine Horsemen: The Living Gods of Haiti. (The film The Living Gods of Haiti, from 1985, is often attributed to Deren but is, in fact, unedited footage spliced together by her third husband, the Japanese composer Teiji Ito, and released after her death.) It is her time spent in Haiti that the second instalment of the Legend project will cover, after a long and frustrating wait for scholars and, to be sure, the Legend editors themselves.

which Mekas founded as a centre for experimental film, is named after Deren, but the difference between the films shown within it and her own practice is almost complete. Mekas wrote in the SoHo Weekly News in 1977: ‘Maya was a great artist, and a great human being […] but she had an aversion to anything casual, unplanned, unpurposeful – the characteristic of the Fifties film avant-garde. I would never have dared to appear with my Bolex in Maya’s presence and begin snapping. That would have been an insult to her principles and ideas of cinema; it would have released torrents of burning, hitting words.’

Melissa Gronlund is a writer and special projects editor of ArtReview.