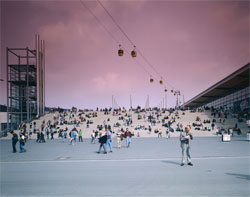 Given the means, most people fancy themselves at one time or another as travellers, adventurers, nomads or escape artists. Tourists, on the other hand, are a much maligned bunch; it’s hard think of anyone who likes them, aside from the massive industry reliant on their trips – not even other tourists. But is it possible to make a distinction between these two geographically mobile and experience-hungry groups? Perhaps those in the first category tend to try and redeem themselves by writing it all down, making epic documentaries about the marital status of penguins or simply disappearing. Ordinary tourists, by contrast, – who apparently number about 700 million per annum – nearly always return to bore you with service complaints, worn comparisons, credit card bills, snapshots and endless video footage of them obscuring the view. One of the disquieting ideas touted by ‘Universal Experience – Art, Life and the Tourist’s Eye’, the extensive globe-trotting exhibition curated by Francesco Bonami, was that whether we like it or not, and even if we stay at home or just make an occasional visit to an art museum, these days we are all just tourists.

The exhibition's first stop was early last year in the Museum of Contemporary Art, Chicago, before moving on in a slightly reduced form to the Hayward Gallery. This year it will conclude its own institutional version of a grand tour fittingly in Italy at the Museo d’Art Moderna e Contemporanea di Trento e Rovereto. Art-making of the kind that fills museums and institutions inevitably reflects the burgeoning internationalism of the contemporary art world – with its biennials, art fairs, networks of commercial galleries, as well as artists and curators increasingly expected to clock up frequent flyer points. The Hayward instalment included work by about 50 contemporary artists, which Bonami and his curatorial assistants installed to ape the experience of travelling, including the possibility of getting surprised, disorientated or plain lost. The catalogue even ironically resembles a travel guide, one which in this case is packed full of good texts as well as a smart parody page – ‘how to use this book’ – playfully mimicking Art since 1900’s user-friendly instructions. Rather than providing a broad linear art-historical overview of tourism and travel in art, the exhibition focused on the contemporary state of affairs, reaching back to older works in an associative, essayistic manner, which for purists might be considered provocative. For instance, Robert Smithson’s film The Spiral Jetty (1970) was shown on a monitor next to Johan Grimonprez’ grimly relevant exposé of the media’s relationship to terrorism, Dial H-I-S-T-O-R-Y (1997), and Felix Gonzalez-Torres’ sweet stack Untitled (Portrait of Ross in L.A.) (1991).

Most of ‘Universal Experience’ had to be viewed in semi-darkness, giving it a gloomy, elegiac atmosphere. It took hours to digest the numerous film and video pieces, including Doug Aitken’s the moment (2005), concerning vague sensations of displacement when in transit, and Matthew Buckingham’s A Man in the Crowd (2003) a compelling film noir installation about the pursuit of a stranger. Photography, not surprisingly, figured large. Prints from the John Hinde Studio’s postcard series depicting stiffly staged good times such as A Corner of the Beachcomber Bar (Butlin’s Bognor Regis) (1968–75/2002), Hiroshi Sugimoto’s monumentally waxen The Last Supper (1999), Thomas Struth’s National Museum of Art, Tokyo (1999), an image of a theatrically displayed Eugene Delacroix painting, and Alexander Timtschenko’s views of Las Vegas, all served to illustrate the idea of replacement of real experience by the fake. Harder-hitting were works addressing conflict in the post-colonial world, culture clashes, and the insatiable pictorial consumption of ‘the Other’. Outstanding was Dennis O’Rourke’s Cannibal Tours (1988), a documentary film about crass tourists visiting an impoverished tribe of former cannibals in Papua New Guinea. Echoing this, Thomas Hirschhorn’s Chalet Lost History (2003) was like a furious foul-mouthed tirade. In a series of rooms containing faux Egyptian relics and souvenirs, Iraq war news coverage and pornography were plastered over every surface. Reflecting the obscenity of military adventure, it equated sight-seeing with looting; just one of the ideas that made 'Universal Experience' no holiday but rather a snapshot showing that, in Bonami's words, 'the world is what it is.'