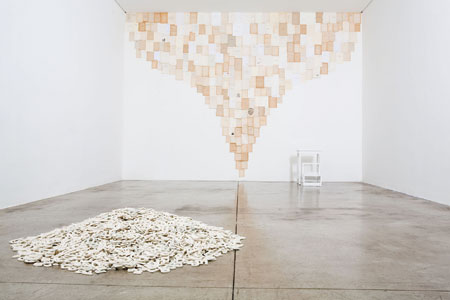 Valeska Soares sorts through piles of old papers on the gallery floor the way a painter would fuss over her palette. But she isn’t looking for colours, and her most recent hunt constituted a search for confessions of love. It took multiple trips to bookshops around the world to compile the 1,000 dedicatory pages that make up a single collage. Soares calls it For To (all works 2007), a panel comprising a chorus of wide-ranging voices from the past that, in their various stages of middle age or dusty decrepitude, still manage to hum a faint tune of forgotten passions and sincerely composed affections.

Seen at a distance, the expanding patchwork of yellowed pages is a generalized testament to the passage of time. Up close, individual messages jump out at the viewer, who is quickly caught up in a world of affairs, confessions, dedications and juxtaposed fancies. Soares seems to marvel at how books on even the driest and coolest of subjects can sometimes carry the warmest signs of a great, if unknowable, love story. With its weighty literary influences this exhibition adds a new chapter to the work of an artist known for her iconographic research into the symbols of love. Originally from the Brazilian state of Minas Gerais, Soares has been living in New York for the past 12 years, but this relocation hasn’t severed her connections to her native Minas, where artists such as Mabe Bethônico, Marilá Dardot and Rivane Neuenschwander have found some of their happiest and most potent leitmotivs.

In front of her collage was another piece, Fragmentos (La Dédicace) (Fragments: Dedication): 8,000 porcelain letters piled on the floor that form a physical, disassembled essay by Roland Barthes on the theme of love. The delicate alphabetical heap appears to have crumbled in discourse, but the solidity of the random characters seemingly defies the ravages of time, a notion strengthened by the idea that they could conceivably be reassembled and used to construct new vows. The potential for renewal seems to filter through the thousand areas of whiteness, but beyond that not much is certain.

Meanwhile, a gloomy picture with a hint of irony developed downstairs, where Soares returned to one of her preferred objects inevitably associated with love: the bed. This time, however, hypothetical sleepers would find discomfort and solitude instead of solace: the mattress was made of marble, and the pillows, despite vestiges of recent use, were just as hard and stone-cold. In the past Soares has made beds out of sugar, mirrors and perfume. A bakery in Mexico, named Pastelería Ideal, crafted a bed cake for her in 2003. The boxes used to wrap it were photographed, and the pictures now make up the mural Ideal. The word ‘ideal’, written in navy blue, was repeated over and over, under a glossy layer of fat, sugar and cake leftovers. It’s Soares’ version of the inevitable ‘sugar blues’ that follow heartbreak.

Although Soares doesn’t seem to think solitude is inherently sad or marked by hopelessness, the artist also hung 12 pictures of clouds drifting in the sky, shot while lying alone in her garden. The series ‘After/Images’ is a poignant reference to the passage of time, one shot for each month of the year. The bright blue sky in the pictures, together with the sublime dark blue of the bakery boxes, contrasts with the sepulchral, tomblike marble of the mattress and pillows. In fact, death seems to lurk around the corner in this show with its rather ominous title: ‘After’. And so the clouds, if not glowing with a silver lining, come now with a sweet aftertaste of renewal.

If love depends on the impossibility of consuming the object of desire, it’s an exercise doomed to frustration. And Soares provides a wealth of literature in order to digress on the subject. Love Stories is a work made up of 125 books with the word ‘love’ in the title. Published by the artist herself, and arranged neatly on a bookshelf as if purloined from the library of some inconsolable lothario, the volumes in five different languages mimic the effect of the dedicatory collage upstairs. From far away they are a colourful display of hidden meaning. When the titles are browsed one after another at close range, a lyrical poem begins to compose itself, one that celebrates the buoyancy of love while also speaking to the bitter weight of stories that sometimes end with irreparably damaged hearts.