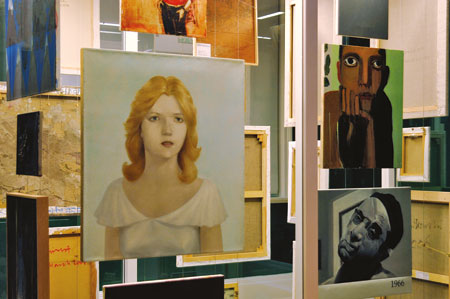 Gold lettering on a green gloss-painted sign hanging outside the Thomas Dane Gallery announced the location of ‘The Museum of Modern Art and Western Antiquities’. Unobtrusive among the Mayfair street’s antique shops and fine art dealers, the intriguingly phrased sign seemed to promise a collection of Modernist works eccentrically hung alongside period furniture and anthropological artefacts. Up the narrow, wood-panelled stairs and into the gallery the colour of the sign outside had also been applied to the interior of the space, in an approximation of the baize walls of a gentleman’s club or dusty provincial museum. A shelf carrying leather-bound compendiums of Old Master painters replaced the usual catalogues of the gallery’s artists.

There were, however, no ‘Western Antiquities’ to be seen. Instead, at the centre of each of the two main rooms stood a large glass display case. Inside these vitrines unframed canvases by contemporary painters were stacked above one another, against the glass, hanging on taut wires that revealed their backs as you walked around the room. The exhibition’s title, ‘Very Abstract and Hyper Figurative’, provided the not-so-subtle key to curator Jens Hoffmann’s arrangement of the works: abstracts in one room, figurative images in the other. Many of the paintings were by familiar young artists such as Mark Grotjahn and Laura Owens, with a smattering of established names thrown in, including Marlene Dumas and Albert Oehlen. In total, the work of 46 artists was put behind glass, suffocating under the dim glow of the cases’ phosphorescent strip lights and hiding behind a hundred reflections sliding on and off their glass walls. Knowingly taking as its starting-point the tired supposition that ‘painting is dead’, the exhibition’s conceit was that by treating art works as artefacts (a crucial distinction) the viewer is afforded a new perspective on the very practice of painting, and in particular on the economic system in which it operates.

Hoffmann’s implicit critique of the show’s commercial context aside, why would anyone hang a group of paintings in such an unsympathetic way? It seems unlikely that he doesn’t actually like the works he selected. Although the roll-call of names could serve as an offhand snapshot of ‘painting now’, the quality and subtlety of the examples chosen indicate a real sensitivity and affection for the medium. Kaye Donachie’s No! Leave Me Alone, You Impure Dream (2007) or Maaike Schoorel’s Table Setting With Tureen (2007), for example, both demonstrate consummate skill in dancing on the edges of legibility, but I found myself having to squint through the glass to see them clearly. Sergei Jensen’s delicate and multi-hued gouache stain on linen (Untitled, 2007) might have been reminiscent of J.M.W. Turner’s late watercolours were it not for the light shining ingloriously through its thin fabric.

Perhaps these effects served to emphasize Hoffmann’s curatorial strategy, but they rode roughshod over the work itself. By grouping works in facile taxonomic associations (nudes here, faces there; small scratchy paintings on one side, hard-edge geometrics on another) Hoffmann’s approach was evidently to treat the works as though they were archaeological discoveries from some distant era, to whose makers' intentions he was utterly oblivious. In a nod to Marcel Broodthaers’ Museum of Modern Art – Department of Eagles (1968–72) this collection of paintings was subtitled ‘The Department of Pigments on Surface’. This faux-naivety is akin to the way a teacher might feign ignorance in order for a child to learn through explaining an idea itself. If we are prepared to play along with Hoffmann’s (rather patronizing) game, questions start to arise that would not normally require answering. For example, why are painters so particularly obsessed with naked women? How can demonstrations of draughtsmanship (by John Currin, Andrew Grassie or Anj Smith, for example) be celebrated alongside stubborn rejections of technical finesse, such as Arabella Campbell’s monochrome Wall (Thomas Dane Gallery) Dulux White Not Brilliant White or Bright White (2007)? How can something be dead and alive at the same time?

The dialogue between figuration and abstraction, once feuding neighbours and now happy room-mates, is central to the exhibition. While the show appears to draw a sharp line between the ‘very’ abstract and the ‘hyper’ figurative, in fact most of the works are neither. Many talk quite loudly across the divide with their counterparts in the other ‘department’. Michael Raedecker, for instance, applies paint thickly to the underside of The Surface (2000), allowing worm-casts of paint to emerge on the picture plane through small holes in the canvas. Phoebe Unwin and Markus Amm both made paintings that could, at a push, have been hung in either room. What Hoffmann achieves ultimately is to discredit his own pro-vocative curatorial premise entirely, which was presumably his aim from the outset. Current painting proves itself to be far more subtle, delicate and sophisticated than this show pretends to assume, a lesson that most of us didn’t need to be taught in the first place.