Started as a festival of video art at the tail-end of the Brazilian military dictatorship in 1983, Videobrasil is now in its 17th edition. Still directed and curated by its founder, Solange Farkas, Videobrasil has expanded from video art to take in electronic media, sculpture, painting and performance. If a little overshadowed on the international stage by the venerable São Paulo Biennial, it is nonetheless an important showcase, especially for emerging artists. The exhibition is a juried open submission, with prizes and residencies awarded after the show opens. This edition was titled ‘Panoramas Do Sul’ (Southern Panoramas), focused on artists from the southern hemisphere – and, more broadly, the idea of ‘the south’ as a geo-political condition – and included the work of 114 artists. This year’s guest artist was Olafur Eliasson – as a Dane he is, ironically, about as northern hemisphere as you can get – who, in his first solo exhibited in South America, presented commissions across three venues in São Paulo, curated by Jochen Volz (a contributing editor of frieze).

Videobrasil’s partner is the Serviço Social do Comércio (Social Service from the Commerce Sector, or SESC), a non-profit organization founded by executives from the goods and services sector. SESC’s São Paulo centres provided two of the venues for Videobrasil: the newly built SESC Belenzinho and the SESC Pompeia, a stunning building, converted from a factory by architect Lina Bo Bardi. The former housed ‘Southern Panoramas’ and one Eliasson work, whilst the latter shared the rest of Eliasson’s commissions with the elegant Pinacoteca do Estado de São Paulo (São Paulo State Gallery).

With its glass-tiled floors, bad sightlines, small spaces and low ceilings, SESC Belenzinho is not an ideal art-viewing environment. As with many open-submission exhibitions – especially one with more than 100 artists – ‘Southern Panoramas’ was a mixed affair. Sean Gladwell’s Double Balancing Act (2010) – a two-channel video depicting a soldier in combat gear balancing his gun on the palm of his hand, and a man perching on crutches outside a graffiti-covered building – did little for me beyond demonstrating some rather boring balancing acts; the military outfit and the contrasting crutches seemed only to make heavy-handed allusions to the casualties of war. Paula Garcia’s performance #4 (2011) involved the artist throwing scrap metal, piled in the middle of the gallery, at magnetized walls. It certainly won the prize for most hair-raising performance to watch but, oddly, seemed to come across more as a posturing physical endurance test than – as it had the potential to be – an oblique take on sculptural issues of mass, form and weight. Deyson Gilbert’s performance Bandeira de água benta/bandeira de água comum (Flag of Holy Water/Flag of Regular Water, 2011) was much more mysterious: two ‘flags’ made of hefty blocks of ice were hoisted onto a kind of wooden gallows in the main gallery and left to melt – the indistinguishability of the two no doubt intended as a comment on the aura of the art work. 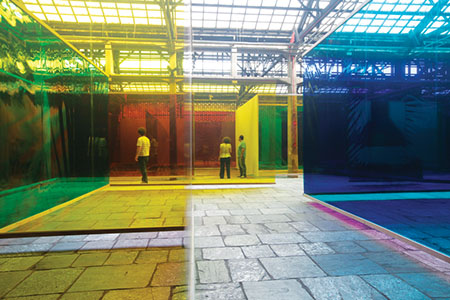 Highlights included Jonathas de Andrade’s Projecto Pacifico (Pacific Project, 2010), a video and map that imagines an earthquake splitting Chile from the South American continent, leaving Bolivia and Argentina with Pacific coasts. Its cold, mock-pedagogical presentation made the maps look like exhibits in a natural history museum from a parallel geopolitical universe. Tatiana Blass’s video Metade da fala no chão – piano surdo (Half of the Speech on the Floor – Deaf Piano, 2011) depicts a pianist playing Chopin at a very expensive-looking grand, as wax is melted into and across the strings and soundboard of the instrument by rather threatening-looking men, turning Romantic études into Cagean prepared piano pieces. Cinthia Marcelle exhibited her Pinchuk Prize-winning video of marching bands parading across a rust-red desert landscape (Cruzada, 2010); Claudia Joskowicz showed Round and Round Consumed by Fire (2009), a tense, single 365-degree panning shot recreating the moments before Butch Cassidy and the Sundance Kid made their final stand against the Bolivian police; and Cristiano Lenhardt presented his video Solenidade de hasteamento da bandeira Ao Vivo (Flag-Raising Ceremony – Live, 2009), which mocks the pomp and circumstance of military bands, and is somewhat reminiscent in its playfulness of Francis Alÿs’s work.

At SESC Pompeia – which, compared to similar facilities in Europe, was like a wonderful Utopian leisure centre – Eliasson exhibited one of his Waterfall pieces (1998); The Structural Evolution Project (2001), modular construction toys for children to play with; Your Empathic City (2011), a video and light installation made in collaboration with filmmaker Karim Aïnouz; Your Body of Work (2011), a labyrinth of coloured dividing screens; and Your Felt Path (2011), a ‘fog room’ in which the visitor gingerly makes their way through thick dry ice towards a celestial-looking light. Eliasson’s work fitted well here: the aspects of it that can seem a little like a disappointing science museum exhibit when seen in art galleries took on a gently entertaining, experiential quality – kids running around, curious adults enjoying the illusions he’d created. By contrast, the work on show at the Pinacoteca – which included Your Shared Planet, a set of kaleidoscope-like telescopes, and a multi-planed immersive mirrored scaffolding installation at the museum’s entrance, entitled Microscope for São Paulo (both 2011) – felt a little more flat as optically inventive sculptures.

However, the Pinacoteca also houses a collection of stunning 1960s Brazilian concretist paintings (not to mention some revelatory Brazilian Pop art). Seeing Eliasson’s work here drew out unexpected comparisons between his activities and those of the Brazilian concretists (in their use of colour and abstraction) and neo-concretists (in their desire to experiment with more immersive environments) – a comparison that opened the panorama of the south up to the north.

Culture Digest
On Our Radar: The Best Exhibitions in Europe Right Now

At Museum Frieder Bruda’s Salon Berlin, the artist reflects on book burning during the Nazi regime