View from the Bridge

When colour theory is no longer enough 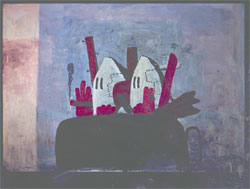 ‘So when the 1960s came along, I was feeling split, schizophrenic; the war, what was happening to America, the brutality of the world. What kind of a man am I, sitting at home, reading magazines, going into a frustrated fury about everything – and then going home to adjust a red to a blue?’
Philip Guston interviewed by Jerry Talmer, ‘Creation is for Beauty Parlors’ The New York Post, April 9, 1977

This was Philip Guston’s explanation of how, around 1968, he gave up ‘Action Painting’ and began the series of bold, tragicomic allegories that preoccupied him for the last decade of his life, making him an inspiration to younger artists drawn into the wake of what was hailed in the early 1980s as the ‘New Spirit in Painting’. Of course, very few artists with whom he shared that moment arrived at painterly pictorial painting as apostates from abstraction. Even fewer did so out of dismay bordering on despair over the downwardly spiralling political situation. By and large, the artists who responded to that imperative had been figurative all along, or else they were practitioners of conceptually based art, widely assumed to be painting’s radical antithesis.
In addition to the powerful body of work it produced, Guston’s crisis of conscience epitomizes the dilemma many artists feel when faced with the hard choice between further elaborating highly abstract projects undertaken in a less conflict-ridden period and entering into the hurly-burly of public discourse in a deteriorating social and cultural climate.
The truth of the matter is that the developed political imagination is as rare in art as it is in political practice. Many are called, but very few succeed in making memorable work, much less work with the capacity to mobilize people. Courage and conviction cannot salvage mediocre efforts in this domain any more than they can in other areas where artists grapple with the conundrums of modernity; and the abundance of sincere but irredeemably bad Agit-prop or protest art is the proof. Guston’s slapstick scenarios of Klanish, Nixon-era thuggery continue to make people think because he positioned them among the villains rather than the victims, thereby forestalling the reflex responses typically triggered by ‘committed’ art and ensnaring them more fully in the dynamics of power. Other artists of the same generation with equally long histories of dissent refrained from injecting social content into their work but took forceful positions by different means. The finest example of this was Ad Reinhardt.
But that was long ago, when the spectrum from the centre to the left encompassed many ideological positions and commanded significant constituencies. The current demonization of liberalism by the right (and previously by the left) has shamed genuine liberals into shunning the term. Meanwhile, the once wide array of radical groups has dispersed, leaving behind an archipelago of entities with a limited capacity for making common cause. The recent drastic polarization of the United States has exacerbated this fragmentation and increased the sense of impotence.
There is another factor as well. Not long ago I fell into conversation with a 20-something writer who, like most of his peers, loaded up on Postmodern theory at university and still uses the concepts and vocabulary he learnt with ease and precision. But when the
conversation turned to Iraq, I discovered that he felt no particular sense of urgency about what was being done to America or the policies pursued elsewhere in its name. However, he reacted with impatience to my assertion that it was up to his contemporaries to find new forms for acting on their social understanding. It appeared that the dire predictions of negative critique had never shaken his faith (born in the generally prosperous 1980s and 1990s) that, however disquieting things might be, somehow everything would be worked out – by someone else.
My friend’s strange optimism is matched among more hardcore devotees of critical theory by a pessimism so categorically mandarin that its adherents have opted out of practical political engagement altogether in order to perfect their ideas of how ‘late capitalism’ will inevitably implode or, failing that, wondrously fulfil their worst dystopian fantasies, thus vindicating their speculations and providing more food for thought.
Having spoken to experts in Postmodernism whose appreciation of its finer points is more exquisite than mine will ever be, I am unsurprised by these responses, but I am increasingly disturbed by their consequences. The shelves of theory written in the last decades have opened many minds, but they have also bred a habit of second-guessing history and a taste for ideological perfection that has led to a brilliant passivity. Mental dress rehearsals of the apocalypse have kept too many potential members of an active community of public intellectuals in their seats for too long, and now, when the curtain is rising on truly earth-shaking events, they seem to be conditioned to watch the performance rather than take the stage. So I think back to Guston and wonder what we are all doing reading magazines, going into a frustrated fury about everything – and then going home to adjust Jacques Derrida to Theodor Adorno.
What is to be done? It’s not that clear, except to say many things, and not all of them in unison or by consensus. One thing is certain, though: those with the gift to speak out in plain and compelling ways must do so now if we are to arrest the acquiescence in lies and peremptory policies that are stifling art just as surely as they stunt and threaten lives here while ending them in faraway places.