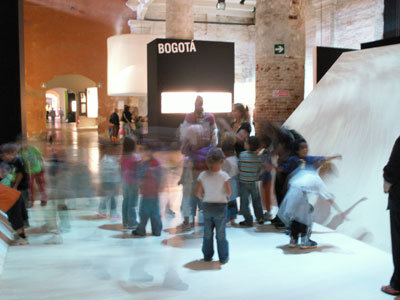 Glib cynicism is an intrinsically conservative stance. So I will not speak here of the radical strains of ‘cynical reason’ theorized by Peter Sloterdijk and shamelessly given form by Mike Kelley, Martin Kippenberger, Raymond Pettibon and other admirable shit-stirrers. My concern is with those who seek to constrain restless imaginations and manage the public. And as with all ideological holding actions, sooner or later ‘progressive’ cynics of the lesser type converge with their overtly reactionary counterparts, at least in the stereotypes and straw men they rely on to justify their fixed positions.

And so it was in the tidal wave of attacks on last summer’s international art exhibitions. An editorial in The Wall Street Journal, authored by a youthful protégé of the geriatric McCarthyite Hilton Kramer, portrays the audience for the Venice Biennale as a kind of de luxe swarm of locusts – all buyers and sellers and scene-makers – feasting on blighted crops, with special emphasis on those who came on mega-yachts rather than winging in. So too Okwui Enwezor – no stranger to power-broking confabs – used his space in an ad-larded art glossy to fulminate against hobnobbing dealers and collectors on the Grand Tour from documenta to the Biennale. Accordingly the magazine illustrated his ‘Oh my God! There’s Gambling in Rick’s Saloon’ piece with a picture of a streamlined launch dockside at the Arsenale.

There’s no disputing the facts; phalanxes of moneymen and -women were there. Some of them give to right-wing causes, some give to left or liberal ones, and a considerable slice of both camps supports museums, exhibitions and even art schools like those Enwezor and I run. So he must know such wealthy people personally, as I do. The contradictions of ‘late capital’ and contemporary culture indeed – come on, friend, ’fess up! Yet when it comes to trashing exhibitions they find challenging, the only people who seem to count for pomo-polemicists of Enwezor’s stripe or for his Ayn Rand-adoring doppelgängers are Daddy Warbucks caricatures.

The statistics tell a very different story. The 2007 Biennale posted a record attendance for the much ballyhooed and lampooned opening days. But the show lasts almost six months, and the overall visitor count was up by some 20 percent on recent Biennales. So who are the rest of these non-art world people, and what do they come for? To my knowledge no sociological study exists, but impressionistically I can say that they are schoolchildren, students, middle-aged, middle-class adults, retirees of the same strata and tourists of every description with curiosity about, if not an active passion for, contemporary art – in other words, a small fraction of those thronging San Marco and the historical sites. The majority – not by much – seems to be European. An equivalent proportion, presumably, hail from places without many galleries or museums for ‘the new’, which is why they make the trip. Furthermore, from the visible evidence, a large part of this circumstantial community of interest is composed of tireless, patient, inquisitive spectators.

Not all come to admire, and not everyone who does leaves happy. Last month I described meeting a group of Catholic clergy and explaining works that they might find either enlightening or offensive, according to whether they leaned towards Opus Dei or Liberation Theology. Odds are on the former, but as quixotic as it may be, when your aim is to engage interested, and one hopes, thoughtful people, it is always a mistake to prejudge them. In that spirit the Biennale has a lively programme for youngsters and docents for the mature, yet no discussion of these educators or their like elsewhere appears in criticism of such shows, nor is there any real mention of the large and motley assortment of people they are trained to serve. Instead these constituencies, and readers mirroring them, are frequently treated to a mix of jaundiced insider talk, social condescension and pressure to take sides in a false dichotomy between a fictionally homogenized public and ‘informed’ – but frequently uninformative – opinion. All too often little is said, and less is described, with respect to the work shown, and even then only the writer’s favourites and pet peeves get attention. In the process contact between art and its self-selecting, diverse publics – a contact artists generally seek through such exhibitions as much as the notoriety and sales they may also gain – is short-circuited. Instead of echoing E.M. Forster’s Modernist mandate ‘only connect’, facile cynics break the current between art and the viewer and tell all who suffer the ensuing loss of energy ‘Don’t bother rewiring’. Praising the mediocre diminishes the best, but the deliberate refusal to distinguish shades of grey in art or its audience does nothing to slow the march of philistinism: it hastens it.