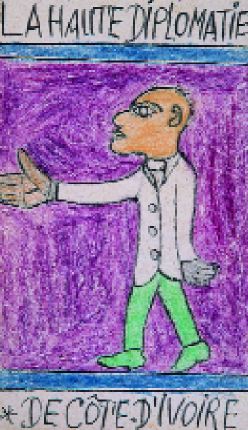 Around the end of last year a private joke took place between two museums. The Musée d'Art Moderne de Ville de Paris organised 'Voilà' ('there it is'), and a few months later art theorist Thierry de Duve curated another turn of the century show entitled 'Voici' ('here is') at the Palais des Beaux-Arts in Brussels. Whether the oblique reference to the Parisian show was deliberate or just a matter of coincidence is unclear, but the specificity of 'Voici' stood firmly against the slapping-something-down-on-a-table quality of 'Voilà'. 'Voici' clearly aimed at reiterating the communicative function of art, desiring to be 'about' artworks and the way they address themselves to the viewer. Yet this specificity, which illustrated itself in an airy elegant display, in contrast to the sprawl of 'Voilà', was at times too literally stressed. The idea that guided the exhibition - of shedding grand narrative themes in order to focus on the pleasure of looking at great works - must have looked good on paper, but the scale of its realisation as Belgium's 'millennium' art exhibition made de Duve's vision appear somewhat cramped and too empirical.

The pedagogical element was evident in the exhibition's entrance hall, where works by a mix of artists including Auguste Rodin, David Smith, Kiki Smith and Constantin Brancusi looked as if they had been grouped together to create a mini-survey of Modern sculpture. A further effect of this display was to suggest a vision of art in which concepts such as humanism or positivism sprung to mind. This was made evident in the awkward hang of works by Marcel Duchamp, Robert Filiou and George Brecht, which were placed halfway up a staircase and easily missed, as if the difficult questions they asked might disturb the calm. A favouring of things over ideas was even clearer in the following section, which overwhelmed the viewer with a variety of objects that explored the genre of still life. Fischli and Weiss's photograph Untitled (Equilibrium Series) (1985), for example, was juxtaposed with a Picasso painting of a still life.

It was only in the 'abstract room', which followed a rather illustrative mirror section (redeemed by Michael Snow's 1969 film Authorisation), that ideas really seemed to be explored. A stunningly beautiful - if classically laid out - succession of works by Robert Ryman, Piet Mondrian, Yves Klein, Lucio Fontana, Ellsworth Kelly and Robert Mangold filled the space as reminders that a search for the absolute was a major aspect of 20th-century art. But while, more than in any other section of the show, these works were given enough room to speak for themselves, I couldn't stop thinking about a scene in a recent TV documentary about de Duve in which the white-gloved curator seized a small work and placed it in a glass case, pursing his lips with satisfaction. Something in de Duve's attitude didn't fit with the unboundedness of Mondrian's Composition with Coloured Planes (1917) or Klein's Monochrome IKB (1957).

Some formal juxtapositions, which the show seemed to take pride in, distorted the intentions of many of the artists: the disastrous proximity, for example, of a particularly boring series of new-born babies, Nés (1998-99), by Philippe Bazin, with Roni Horn's beautiful series of portraits You Are the Weather (1994-96) typified this.

The best and the worst uneasily co-existed in the exhibition's finale, which was subtitled 'Us'. Sylvie Blocher's For Ever (2000), in which she explored relations between parents and children from Brussels, was moving despite its clinical and metaphoric house-like display, while the work of the ubiquitous Michel François fizzled like a damp firework.

While de Duve justified his selection by saying it reflected his own highly subjective taste, 'Voici' looked like an uneasy survey of 20th-century art for beginners. The catalogue essay, which rehashed the birth of Modernism with Manet, made this apparent. Yet what was seriously lacking in de Duve's rather orthodox choices was the ugly, the uncanny, the highly sexed, and the politically vociferous - all vocal elements of the art of the last century. It made me rethink the qualities of the demanding, and not so immediately beautiful 'Voilà'. 'Voici' ultimately came across as a curious, rather petit bourgeois association between Modernism and connoisseurship.