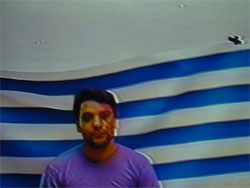 Violently displaced from its body, a car engine lies in a pool of leaked oil. In case it should suddenly leap into life again, a military official levels an automatic rifle at the inert lump. Presented as a group of framed inkjet prints, My Neck Is Thinner than a Hair: Engines (2000–3) is the first in a series of works in ‘Funny, How Thin the Line Is: Documents from The Atlas Group Archive’ that examine the spate of car bombs detonated in Lebanon between 1975 and 1991. A wall text informs us that the engine is ‘the only part that remains intact after a car bomb explodes’, and that ‘during the wars photojournalists competed to be the first to find and photograph the engines’.

The Atlas Group has gathered 100 such photographs from the archives of the An-Nahar Research Centre and the Arab Documentation Centre. Forming a tight horizontal grid, the photographs reveal the aftermath of detonation; explosives specialists and military investigators prise apart twisted metal in search of clues while bemused young men close around the scene. A peculiar trophy of a struggle so viciously played out, the car engine, a now lethal delivery mechanism, takes on an almost talismanic importance.

Established by artist Walid Raad, The Atlas Group is an imaginary foundation whose aim is to research, document, study and produce audio, visual and literary artefacts that shed light on the contemporary history of Lebanon. Described as ‘re-igniting our curiosity in the truth’, the project runs a convoluted line between fact and fiction, replacing unitary power with fragmented assemblage. In part the work exploits the notional understanding of the gallery or institution as the site of venerated liberal truths. How are we meant to view the work? The multiple images of violent display are reminiscent of Gertrude Stein’s assertion that ‘ugliness repeated becomes beauty’. This leaking oil heart is now a stand-in for a struggle that is in part unknowable.

Raad uses the conventions of archival museum display. Sombre grey walls, crisp white text and soft lighting lead us through the galleries. In the next room a network of dark, undulating spherical holes punctuates a low-level circular dais. Described as a scale model of all the detonations in Beirut between 1975 and 1991, the work is attributed to one Nassia Hassan, a senior topographer in the Lebanese Army. Upon being presented to the Lebanese parliament’s Committee on Development and Reconstruction, the original model – this is a replica – caused ‘the most heated and contentious parliamentary sessions in Lebanon’s recent history’, resulting in the dismissal of Hassan. As a sculpture, I Was Overcome with a Momentary Panic at the Thought that They Might Be Right (2005) formally spins the anthropomorphic Minimalism of Donald Judd with the etherealness of John McCracken; radicalized aesthetics in the form of a diagram-cum-sculpture.

Raad’s critique of documentary formats continues with We Can Make Rain But No One Came To Ask (2005), a ‘possible’ video collaboration between a leading ammunitions expert and a photojournalist that examines a specific detonation at Furn Ech Chubak, Beirut. The footage appears largely innocuous: street corners blend into each other, and unknown figures loom large as digital architecture twists and slides across the screen. This is video document as digital wallpaper, an endless shifting surface that expresses slight unease. Collectively the works propose a triangulated discussion that examines acts of extreme violence through the fractured lens of photography, sculpture and moving image.

In the second gallery Hostage: The Bachar Tapes (#17 and #31) (2001) is introduced with the statement ‘Yes our story is tragic, yes it is sordid, but you have to remember that it is first and foremost a story’. Souheil Bachar, we are told, was held captive in Lebanon between 1983 and 1993. In two-minute video sequences – a duration equivalent to periods spent in interrogation – he tells of his days spent in the same cell as five American men: Terry Anderson, Thomas Sutherland, Benjamin Weir, Martin Jenco and David Jacobsen. Bachar, a low-level employee at the Kuwaiti Embassy in Beirut, discusses the alienation, in part sexual, he feels when at one stage his aroused passions are suppressed violently by a fellow captive. In I Only Wish That I Could Weep (2000) we are privy to the ‘donated’ surveillance tapes of a seaside boardwalk and potential meeting-place in Beirut made by Lebanese army intelligence officer ‘Operator #17’. After observing the passers-by the camera is inexorably drawn to the setting sun and the glimmering horizon line. Rather like King Kong, Operator #17 cannot help but be drawn to the beauty of the dusk, and for this he is dismissed – a satirically suggestion of universal desire.

Is the Atlas Group’s work simply an overwrought examination of truth, the first casualty of war? Perhaps, but to a greater extent it represents the liberating imagination of independence from fixed ideologies, sharing something of the ‘literary forgery’ of Jorge Luis Borges. Raad self-consciously reconstructs his relationship to what came before, presenting a battle between oppositional systems working towards the creation of fictional worlds distinct from each other, competing for the readers’ attention.
Raad describes a state of cultural, political and existential fragmentation that challenges the simplistic polarization of complicity and resistance. As Robert Smithson stated in The Artist and Politics (1971), ‘direct political action becomes a matter of trying to pick poison out of boiling stew’. Raad is in favour of an art that, like ‘the mirror in vampire films’, suggests displacement – a form of gaze that provides the viewer with a new sense of agency.