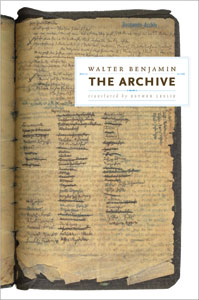 What kind of book is Walter Benjamin The Archive? It feels like a weighty tome, another addition to the list of Benjamin’s writings now available in English. On the cover is an image of Benjamin’s minute handwriting, the seam of the notebook in which it appears almost following the spine of the book we hold in our hands. Thus it is intimated that here we have a book of reproductions of many of Benjamin’s treasured manuscripts and notes, a kind of photographic documentary. Then, when we open the cover, the flysheet announces that this is a ‘memoir’. The book is all of these things: a work by a major thinker, the catalogue of the 2006 exhibition at the Academy of Arts in Berlin of items from his bequest and a biographical resource.

It is as a kind of biography that this compelling and beautiful book is most poignant. Examples from Benjamin’s collections of postcards, photographs of Russian toys and images of sometimes penetrating, sometimes impenetrable thoughts jotted on the back of railway tickets and leaflets provide striking illumination of his genius for collecting, and of his mind in the most impromptu acts of conception. Most touching of all is Benjamin’s catalogue, under the title Opinions et Pensées (Opinions and Thoughts), of the early words, statements and eventually, letters of his son Stefan.

All of this might be dismissed as just so much charming ephemera. This book does make what might be thought of as a conventional contribution to our understanding of Benjamin. It makes available for the first time in English a number of important notes and fragmentary manuscripts – or ‘mandosquiks’ as the infant Stefan would have termed them – which include an intriguing list of ‘Types of Knowledge’ and an insightful paragraph on the way that the word ‘I’ is deployed in Marcel Proust and Franz Kafka. Moreover, we must pause before we dismiss these scraps of paper as ephemera because one of Benjamin’s major contributions to 20th-century thought is his insistence on the historical significance of what is cast aside as refuse, as rags and bones. In fact, Benjamin’s interest in what is usually ignored extended to his own work and motivated his fastidious concern with the appearance of his texts and even with the brand of notebook in which his thoughts were worked out. What is usefully demonstrated here is that he was indeed ‘an aesthetician of the written sheet’.

This book elegantly brings together the materials of Benjamin’s bequest and reminds us of what his friend, Theodor Adorno, rightly said was its greatest significance for subsequent thinking: the insistence that ‘knowledge must indeed present the fatally rectilinear succession of victory and defeat, but should also address itself to those things which were not embraced by this dynamic, which fell by the wayside.’