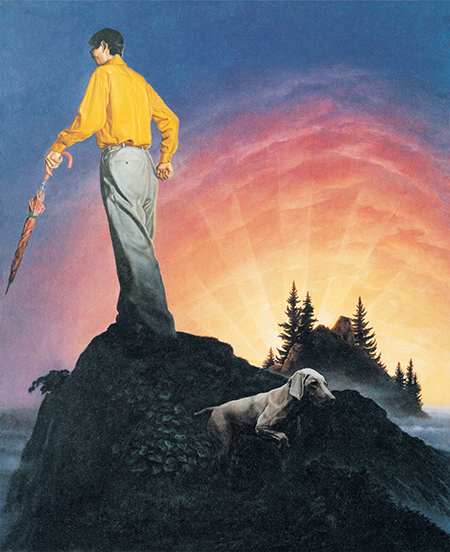 In his mid-career survey at UCCA, Wang Xingwei chose to present 74 paintings from various stages of his career in three groups. The exhibition started with a section titled ‘Back’, continued with ‘Side’ and ended with ‘Front’. Each group was determined by the angle from which the artist viewed and depicted his subject – be it penguins, nurses, seascapes, architecture or fictional scenarios. This rather arbitrary and surprising organizational principle was Wang’s own curatorial choice.

All of the works in the show – produced over the last 20 years – escaped a chronological or narrative interpretation. In this sense, it was befitting of the artist’s eclectic and unpredictable practice. Wang is well known for experimenting with different painting styles and subjects simultaneously. He often paints the same subject in several versions on different canvases and presents them next to each other. He also tends to work with the same configurations and icons at different stages, depicting them in alternative compositions. At times he adopts realism; at other times, his characters appear as simplified cartoons. He freely employs techniques from advertising posters, amateur painting, commercial painting, sketches, graffiti and illustrations – switching from one to the other frequently and without apparent explanation. This unique practice originated with Wang’s intent not to subject his painting style to a traditional aesthetic evaluation, or to rely on any single model or theoretical methodology.

Wang’s career began in the early 1990s in Haicheng, a small city in northeastern China. His art education mainly came from books of reproductions of paintings from the European Renaissance to post-Impressionism. These images had a lasting and decisive impact on the artist, and his compositions and colour palette repeatedly evoke these early influences. Mao Yan (2010), for example, is a large portrait of Wang’s painter friend, set in a bright, Caspar David Friedrich-esque landscape. Wang has also painted surreal portraits such as Untitled (Flowerpot) (2009), in which a woman’s head is replaced by a flowerpot. In Painting Wang Yin (2013), a portrait of another painter friend (whose works are sometimes compared to Wang’s), Wang uses the same brushwork and kitschy colour that Wang Yin himself would have used in his own paintings.

As Wang Xingwei expressed in one of the exhibition’s wall texts: ‘I hope that people will forget to ask me why I painted this or that, or why I painted in this or that way. I want them to experience something of their own.’ Wang entered the art scene in the late 1990s, moving in 2002 to Shanghai and eventually settling in Beijing in 2008. It was a time when artistic movements such as ‘political pop’, ‘cynical realism’ and ‘Conceptual painting’ were being celebrated in contemporary Chinese art discourse. Artists tended to create an easily identifiable style or work with heavily political or sociological references and implications. Wang responded by consciously avoiding trying to gain value through the creation of a specific style or a direct or literal re­sponse to social and cultural issues. This wilful randomness started as a self-imposed discipline and became an integral part of his daily practice. Zhang Li, a Chinese art critic and close friend of the artist, described the ideas in Wang’s canvases as something he arrives at when his mind wanders. You can detect anything from iconic art-historical images and scenes from well-known comedies to anonymous cartoon figures and images from the artist’s daily encounters. His stylistic languages, meanwhile, are equally uncategorizable and subjective.

The numerous interpretive roadblocks that Wang has laid out, which he successfully highlighted in this exhibition, have their roots in his critical reflection on the easy consumption and accessibility of painting in China. His refusal to present his own career as a progressive process is consistent with the complex nature of his practice: choices that seems at times random and at others logical, but never to be taken for granted.