Wheels To Get To Heaven 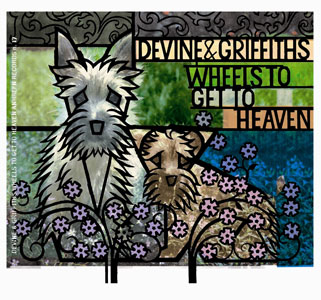 Buried deep in the arcana of Morrissey Studies is the fact that it was guitarist and songwriter Ian Devine – then playing with post-Punk free pop ensemble Ludus – to whom Morrissey first turned as a potential collaborator when he was forming The Smiths in the early 1980s. A quarter of a century later, on the evidence of Wheels To Get To Heaven – written and performed by Devine and recorded with vocalist Amanda Griffiths – one can instantly recognize the charisma and artistry that so attracted the author of ‘This Charming Man’ (1983). From the opening bars of its title track – as though the portentous drum beat from The Jesus and Mary Chain’s ‘Some Candy Talking’ (1986) had been spliced with the tonal luxuriance of a Roy Orbison guitar line, played half-speed – Wheels To Get To Heaven is an album that declares its own intensely felt and defended world: a weaving of invincible charm in the lineage of not just The Smiths (1984) but also Joni Mitchell’s Blue (1971) or David Sylvian’s Brilliant Trees (1984).

The common denominator of these iconic releases is the tension they maintain between profound romanticism and lightness of touch: the achievement of such poise, musically and lyrically, that the faintest instrumental or vocal inflection acquires massively amplified emotional resonance. ‘You’re the 20th century,’ sings Griffiths on ‘Prince of Light’, in a voice at once seductive, detached, gentle, boyish and weary, ‘without the wars or the death of the Kennedys …’

What you hear on Wheels To Get To Heaven are nine songs concerning the emotional ultimatums established by love. Like that of an evening in early spring, the atmosphere they convey is both entranced and alert – alternately brooding and enchanted. (‘Well, the dreams I’ve had would make anybody sad,’ Griffiths sings on ‘Lucky Day’, ‘and I have to say you’ve got in the way …’) Musically, each song makes a forceful virtue of apparent simplicity. The delicacy of ‘Lucky Day’, for example, is heightened by its framing within a barely audible top line of silvery notes (echoing the celesta chimes that open The Velvet Underground’s ‘Sunday Morning’ from 1966); the caressing fall of Griffiths’ vocal, from impassive sweetness to a deeper and warmer intonation, likewise creates a presence that is both acutely intimate and held at arm’s length.

Devine’s bewitching guitar lines (occasionally exchanged for mandolin or even the burnished Eastern drones of a Mohan Veena) possess both urgency and quietude, further shaped and made more complex by touches of percussion, trumpet, double bass and flute. Devine’s own voice – as deep as that of Lee
Hazlewood – shadows that of Griffiths at about a single beat’s delay, its tonal darkness somehow suggestive of spiritual insomnia.

Over the last twenty years Devine has made two albums with Alison Statton of Young Marble Giants, recorded with Blaine Reininger of Tuxedomoon and collaborated on improvisational performances with Can’s Damo Suzuki and with Linder from Ludus. With Wheels To Get To Heaven (its packaging gorgeously designed by the legendary Benoît Hennebert of Brussels-based label Les Disques du Crépuscule) he appears to have written his masterpiece – with a mesmerizing vocal performance from Griffiths (who with truly disarming radicalism describes herself solely as ‘a housewife’) that completes and enhances the rare and astonishing circuitry of this electrifying recording.