This Will Not Happen Without You 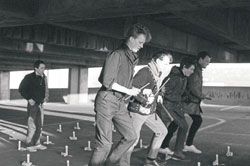 To photograph an event is to negate its subjective, experiential basis. We understand that lens-based technology does not produce a factual inscription of events, although it is often presented or perceived as such. In a further contradictory flip, even though we recognize the hazard of image-based historiography, we are not nearly ready to relinquish visual links with past events. Although many live art practitioners take a hard line on issues of documentation, refusing to admit photography or video as a legitimate stand-in for the live event, such material nevertheless abounds in archives, books, websites and showreels.

Locus+, the commissioning body based in Newcastle upon Tyne, are currently touring an archive of material reflecting 30 years of performance, site-specific installation, collaborative, temporary and socially engaged projects. Locus+ is the current incarnation of a transitory band of practitioners that started as Ayton Basement in 1976, then mutated into the Basement Group in 1979. In 1984 the group gave up its permanent gallery and project space, becoming Projects UK, concentrating on site-specific and touring works until 1992, when the body reconfigured itself as Locus+, supported by Northern Arts and focusing on issue-based practices.

The wealth of material that constituted ‘This Will Not Happen Without You’ presented major problems of display. The aim of this retrospective was, presumably, to survey the sustained vivacity of the group’s activities, for which the clarity of individual projects is necessarily sacrificed. In 2005 the New-York-based Franklin Furnace tackled their archival show at the Baltic, Gateshead, by focusing on performances to video. Although this gave a certain coherence to the show and integrity to the work, it suffused the archive with a misleading museological calm. Locus+, on the other hand, took a much more fragmentary tack, including video and photographic documentation alongside posters, programmes, news coverage and administrative documents, from minutes and manifestos to an application for a Royal Mail P.O. Box. With a few hours’ worth of footage on half a dozen or so monitors, this was not a comfortable show to absorb – but then history should not, or rather cannot, be conveniently packaged.

Whereas the Franklin Furnace show erred towards a commodification of their commissioned works, Locus+ were careful to emphasize the sites of their projects and the sometimes bewildered community with which they engaged. In one television clip, a north-east television news reporter stands in front of the site of Charlie Hooker’s Mainbeam (1983): ‘To you and me this may look like a multi-storey car park. In fact it is a multi-storey car park. It is Gateshead multi-storey car park. But this Saturday it is also a theatre. Yes, a theatre.’ This sort of sardonic incredulity is more than familiar to artists and facilitators who regularly interact with the wider public. Albeit galling that it still persists in mainstream media, it reminds us that although Locus+ have developed in line with New Labour policies on public art, they have maintained a curatorial standard that is internalized and artist-led.

Having said that, there have been a number of media-friendly heroics supported over the years. These include: Layla Curtis’ Antarctic expedition, represented by Polar Wanderings (2006), screen prints of her GPS-tracked routes; Chris Burden’s unmanned Ghost Ship (2005), which sailed be-tween Fair Isle, Shetland and Newcastle, Escape Routine (2002); Simon Patterson’s rather laboured escapologist’s instructional video in the idiom of the in-flight safety announcement; Marina Abramovic with a large, threatening snake coiled around her head; and Lawrence Paul Yuxweluptun’s shooting of copies of the Canadian government’s Indian Act of 1968 as a protest against its oppressive measures in An Indian Shooting the Indian Act (1998). Sometimes, though, it is the smaller, quieter or bathetic moments that communicate a more limber or romantic idea of countercultural collectivity. For Logorrhoea (1983), the six members of the Basement Group each recorded an audio track, oblivious to the content or style of the others. These were mixed down into a pretentious cacophony, hilariously of its time, which was distributed on flexidisk in Performance magazine and, as Locus+ director Jon Bewley puts it, was perhaps played once on a Sunday night on a Dutch radio station.

The warp and weft of history is made up of these moments – when the rock of time rolls back to reveal an almost insignificant artefact – combined with the grander iconic events that lie closer to the surface of collective memory. It is important, then, that equal weight is given to the overlooked and that which has gained cultural currency, for looking back invariably tempers celebration with melancholy.