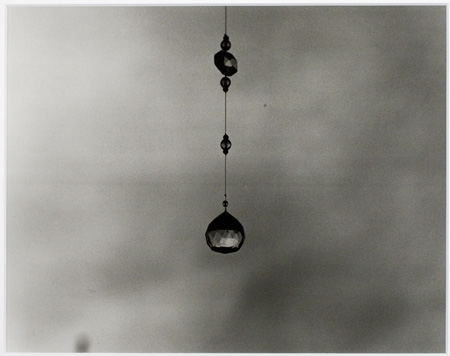 Time is an essential part of Will Rogan’s work. In his recent show at Laurel Gitlen, moments, days and years unfolded, in his use of light and treatment of seeing, perceiving and preserving images.

In the front room, a collection of prisms were hung from wires secured to the ceiling (Sleep, all works 2010). Each one was spray-painted a black matte, eliminating its ability to refract light. Opposite the sculpture was a gelatin silver print of a functioning prism (Day). On a perpendicular wall were two photographs, one of a woman in the woods wearing a jacket printed with a map of the world (World Jacket), and the other of the cover of H.G. Wells’ 1895 sci-fi novel The Time Machine, titled The Time Machine Closed. In the gallery’s second room these photos reappeared but with precise changes: The Time Machine Scratched was essentially the same set-up as its Closed counterpart, however it was a more lightly exposed print. A scratch on the negative was visible and the book was in the same position but its age was more apparent, the spine of the book taped together, the cover tatty and worn. Another image of the prism, considerably darker, called Night was referencing the time of day in which this photograph was taken, 12 hours after its counterpart; and almost an identical photograph to World Jacket with the same title was taken just moments after its counterpart.

Additionally, a video of incense slowly burning, the ashes of the lit stick slowly crumbling away; a photograph of a child-sized T-shirt printed with a clock pointing to three o’clock, titled Julia; and two sets of Rogan’s erased magazines were also on view. In the first series of erasures, ‘Pairs’, Rogan revisited earlier works, using covers from the 1970s magic magazine MUM. Using an eraser, the artist removed the magician from the image. Dates and title of the publication were faintly visible and, with close examination, subtle abrasions and rips could be seen. In the other series, ‘Equivalents’, taken from pages of MUM, Rogan has again erased the magician, in turn representing the artist himself who has the same power to make things appear or rendering them invisible.

Rogan’s work deals with both nostalgia and mortality, as time (and people) disappear. Intervals become the marker of time – an interval of moments in the two World Jacket photographs; days, as in Day and Night; and, in the erasure series, years.