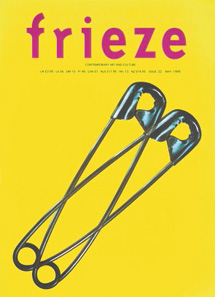 Henry Miller, like de Kooning, was excited by the metamorphosis of passing things. It was the movement between signs rather than the signs themselves that elucidated life; the grotesque and the beautiful in one hot congested glance. The swagger of a woman walking down the street, all lipstick and high heels, would ignite Miller into a rapacious cubism in an attempt to take her in from every angle. His whole body would break out in unarrested fractures of desire. Something of the same heady feeling of flight elicited by Miller's lazy sarcasm in The Tropic of Capricorn is present at virtually all times in de Kooning's exhibition.

'Of all the movements, I like Cubism most. It had that wonderful unsure atmosphere of reflection ­ a poetic frame where something could be possible, an artist could practice his intuition'. De Kooning clearly saw Cubism as a liberating device. Through its appropriation he could threaten his subject with dissolution. Thus, he eventually broke the Cubist model into the subconscious, automatic brush mark. The all-consuming desire to exorcise formal composition dominates the early paintings. The undoubtedly influential Composition (1955) fights in desperation to de-compose itself, and thus deserves its place in a line of 'non-linear' reasoning that is strangely and forever European. From Kurt Schwitters to Asger Jorn and Franz West, it is an enviable, superior awfulness ­ a sick Modernism that makes questions of figuration irrelevant.

The first rooms of the exhibition develop an abbreviated history of Cubism and Surrealism to which, after a long period of overt Expressionism, one feels he eventually returns. Planes cut into irregular shapes are put together in a shallow relief-like space, both in the Pollockesque Attic (1949) and Untitled III (1986), which lurches grotesquely over the surface in its division of white space. Perhaps as a young man and again in old age he felt the need to describe this slow falling-apart; the modern anxiety of Dali and Picasso.

The exhibition, however, fails to describe de Kooning's multiplicity. An overtly literal order has been applied, which is exaggerated by the exclusion (in the Tate's version of the exhibition) of some early paintings which represent de Kooning at his most belligerent. The cruellest curatorial moment lies in the room representing the paintings of 1957-63. In their stylish abstraction, they reveal de Kooning's unfortunate relationship with Franz Kline, and bear the burden of their relative vacuity. He seems at this point to have believed in his sanctity as an 'Abstract Expressionist'. The exhibition disregards the smaller infrequent 'woman' paintings that punctuated this period, shamefully cleansing the beads of sweat that gather on a worried body ­ the exception that might have proved the rule. The curators have seen fit to designate the figurative against the abstract and consequently fly in the face of de Kooning's considered metamorphic confusion. Only whilst Pollock was losing the figure was he truly inspired ­ once it had gone, so had his 'genius'. The same could be true of de Kooning; only he had to live on with his success, through his un-dead death of abstraction, alone in his ship of a studio. Ironically, this period brought him a new found commercial wealth, even if it lacked the ferocity of his war with Pollock.

His renewed examination of the 'woman' theme in 1964 brings back some of the edgy character of earlier rooms. One can only concede to his feminist baiting 'goddesses' that, like the earlier paintings, they revel in a luscious fanaticism even if they lack the former anger. Their misogyny is perhaps best compared to the potential vaginal obscenity of Duchamp's Fountain; their fleshy discursiveness a counterpoint for Duchamp's wilfully dumb bride. De Kooning said he wanted these 'women' to be funny. That they have humour is without question. The paintings from this moment on are unfathomably cracked and come closest to justifying the title of 'genius' afforded him. He realised the break with logic that was available by simply having a good fuck on the canvas and ­ unlike with Yves Klein ­ it was an act that came unreservedly.

A psychosis pervades a painting such as Woman, Sag Harbour (1964). Both rape and comic romp, its mix of the sacred and the profane, of double entendre and irony ­ as with Duchamp ­ creates its great sincerity. As the women have form they have character, and in each brush mark they exude de Kooning's subservience to their greater spirit.

It is a pity that good taste dictates that we be denied any work produced after his descent into Alzheimer's disease, good taste thankfully eluding de Kooning himself during his former years. Without playing the role of mad genius, de Kooning enviably accomplished an epic dislocation of normality ­ for an understanding of which, one would do well to refer to Antonin Artaud's essay on Van Gogh. The end of the exhibition is, in fact, no end at all. de Kooning is still alive and painting.