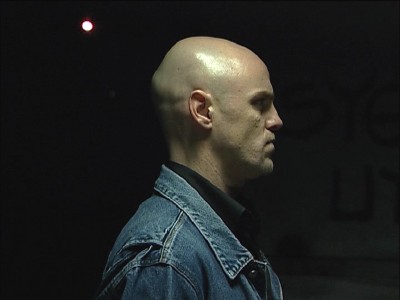 ‘Replays: Selected Video Works 1994–2007’ was a substantial survey of Northern Irish artist Willie Doherty’s output from the last 13 years. A sombre corpus that is reflective in tenor and exacting in detail, Doherty’s work charts the rickety socio-political landscape of contemporary Northern Ireland with a grip that is disquieting and disorientating. For the exhibition, Matt’s Gallery was divided into two sections, with the newest piece, Ghost Story (2007), projected throughout the duration of the exhibition (and also screened at the Prince Charles cinema, London), accompanied by a changing roster of eight video works.

Ghost Story is an unsettling metaleptic tale in which the camera tracks slowly along a deserted country path, intercut with short flashes of bleak rural locations and close-ups of male and female eyes that look past the camera, witnesses to something that we will never see. The video’s voice-over, by the actor Stephen Rea, is a flat, unemotional account of violent acts and encounters, half-remembered but potentially also imagined: ‘My train of thought was interrupted by a further incursion of unreality. My eyes deceived me as I thought I saw a human figure. No matter how quickly or slowly I walked, the figure did not seem to get any closer.’ If even the unreliable narrator can’t be sure, where is the viewer to situate himself within this shaky narrative? This sense of uncertainty is reinforced by the constant reappearance of a lonely, mucky path; for while we glimpse other sites, do we always return to this same place, or are we always being returned there? Are we the victim or the villain? Doherty returns to this motif time and again in his work, withholding vital information or clues that will allow his viewers to make a final decision one way or the other. This is a refreshing approach to art that deals with political content, leaving just enough space to coerce the audience into a sustained inquiry, even though, of course, we know there can be no final answer.

Language is an important element in all the videos shown in this mini-retrospective. The voice-overs are redolent of late Samuel Beckett – an even, toneless (nearly always Northern Irish-accented) delivery that conceals its own textual texture. Non-specific Threat (2004) is a work that hits hard and precisely – the linguistic equivalent of a rabbit punch. The camera pans 360º around a shaven-headed man. He is situated in the centre of a derelict, graffiti-covered room, and we are unsure whether he has been put there or is waiting for someone else to arrive. As the camera circles the man, we are invited to scrutinize his appearance for possible clues: largely impassive, scarred scalp, casually dressed, tensing and releasing the tendons in his jaw. Nothing is conclusive here. We can’t be sure.

‘I will make your dreams come true / I am everywhere / There will be no shopping / I am any colour you want me to be / I am any religion you want me to be / I am the embodiment of everything you despise.’ This voice-over is a good example of the tension between the emptiness and fullness of meaning in Doherty’s use of language, where, through close examination, the mundane (‘shopping … television … computers’) is transformed into the extramundane (‘We control each other’), the potential of which, from personal experience of having grown up in Belfast, I can report was at one stage a daily occurrence. There is an inevitability in the timbre and content of the voice-over in Non-specific Threat – which, unusually, has an English accent – that is extremely oppressive, effectively placing us within the main character’s mind, while maintaining an ambiguity as to who really is speaking. While this man may look like he is the one who will be delivering the kneecapping, he may in fact be waiting to receive it.

Empty (2006) has a very different point of focus from the rest of works on show. Although still registering within the Beckett range, it has more in common with Breath (a 25-second survey of detritus accompanied by a baby’s cries, written in 1969) than with the spare commentary in Worstward Ho (1983). Empty is a pensive work shot in a single day on location in Belfast. It scans the outside of a disused late–1960s’ office block: as dawn breaks, we begin to examine the peeling surface of the building; as the day passes we try to peer through grimy windows out of which no bored workers gaze; by evening, we too are desperate to go home. The soundtrack to this urban document is the steady susurration of a distant helicopter mixed with the whirl of nearby traffic: sounds that suggest life is going on elsewhere but most definitely not here.

This chronicle, in common with the rest of Doherty’s work, is an effective metaphor for the supposed social renewal of places such as Northern Ireland, where flocks of new investors have descended, attracted by recent political ‘developments’. As old blocks such as the one in this work are pulled down to make way for shiny new ones, so a cosmetic cycle of regeneration is set in motion. It will be interesting to see how it all turns out.