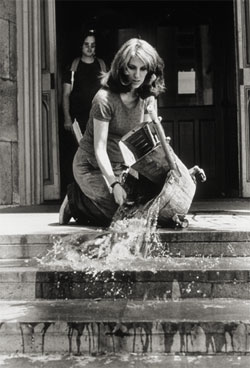 There are only a few four-letter words that still truly affect me, and ‘work’ really is the worst of them all. Because of this I was initially anxious about visiting ‘Work (W3:K)’, yet despite my initial reservations the exhibition did a pretty successful job of covering the problematic relationship artists have with their status and the products of their labour. Taking as its starting-point a ‘revolutionary’ moment in the 1960s when artists began to use their indeterminate position as unwaged workers, ‘freelancers’ or female practitioners with a dual role as mothers or housewives to develop a variety of political practices, the exhibition looked at how the work of successive generations has evolved according to the social, economic and global changes of the past 40 years.

From my generation’s perspective the first emotive works in the show were Paul Graham’s photographs. Works such as No.13: Mural Camberwell DHSS, South London, 1985 (1985), which shows an interior decorated with an alpine wall painting, represent the bleak bureaucracy of British unemployment benefit offices and worst-case scenario poverty of the early to mid-1980s. However, a vast array of other perspectives were shown alongside these. Martha Rosler’s Know your Servant Series, No. 1: North American Waitress, Coffee Shop Variety (1976) – a multi-panelled piece based on the rules and protocols of good waitressing – vied for attention with Robert Adrian X’s 24 Jobs (1979) and Jeff Wall’s Housekeeping (1996). Gender clichés and humour are contained in Rosler’s work, and these collected diagrams, coupled with lists of ‘ideal’ waitress behaviour, play critically with areas of subjectivity that objectify and dehumanise. This worked well with Wall’s more earnest photograph of an immaculately ordered hotel room, pictured with a chambermaid exiting. Adrian X’s small clay models of himself were made at a time when artists were still able to question their own position as ‘artists’ in a relatively straightforward way, and his depictions of all of the jobs he’d done up to that point to support himself – from sign maker, framer and life model to gardener, builder and decorator – were paraded on a small circular plinth.

Serious, yet not without irony, Kirsten Justeson’s The Class Struggle (1976) also addresses the artist as split personality – a classically posed photograph depicts Justeson wearing a dressing gown and rollers, surrounded by children, and with both domestic and sculptural items in her kitchen, suggesting the artist’s own ambivalence towards her situation. A similar perspective was addressed through the inclusion of Alexis Hunter’s The Marxist’s Wife (still does the housework) (1978) and Mierle Laderman Ukeles Hartford Wash: Washing, Tracks, Maintenance: Outside, July 22, 1973 (1973). Hunter washes a portrait of Karl Marx, which contains the text ‘Man, Thinker, Revolutionary’, and smears the word ‘Man’ while trying to clean it out of existence, while in Ukeles’ work the artist mops a museum's steps with nappies, referencing her role as mother and artist.

From the current generation’s perspective Carey Young’s I am a Revolutionary (2001), situated upstairs, had a mocking affinity with the 1960s and ’70s art-workers’ position. In her short film Young receives tuition in public speaking to present herself convincingly as a revolutionary activist. Without a traditionally Marxist wage-earning position from which to demonstrate, many of her predecessors had to struggle to locate themselves. Young translates this struggle into an attempt to escape a similarly awkward situation, this time for a generation where women are more empowered in the workplace but equally subsumed within a fragmented economy. Young’s work is passive and makes no real attempt to break free from her position – which is partly the point, because in a traditional sense, any ‘revolutionary’ moment is countered by the corporate setting within which she receives her training. Young would probably maintain that her attempts are liberating to some degree, but for whom and why? If there’s a problem, it’s simply that the artist looks a little too comfortable with the ‘impossibility’ of her position – there are far more interesting or even ‘revolutionary’ ways of playing with our environment that don’t involve such habitual routes. By comparison, Moira Zoitl’s Chatter Gardens. Stories by and about Filipino Workers (2002/2005) looked relatively straightforward and corresponded well with other works, especially Rosler’s. Zoitl’s construction – which looked fantastically inappropriate in the large, airy Glucksman Gallery – represents a Filipino maid’s cramped living conditions and, like Rosler’s waitress protocols, contained a list of restrictive rules inside.

Of the many other works included, Adrian Paci’s Turn On (2004) had a powerful impact. The video depicts unemployed men from Shkoder in Albania – the poorest town in the poorest country in Europe – sitting on steps where they congregate each day to wait for work. Each is equipped with a light bulb powered by a noisy generator, which lights up their worn faces. The desperate poignancy of this video, which shows untapped human energy and wasted lives, could be seen as aestheticizing trauma, but I’d side with an honesty and frankness in the work.

This exhibition had added meaning in its Irish context; with the economy buoyant, fewer young people are migrating away and new projects such as the Glucksman are being built, but Ireland’s population is still divided quite traditionally in terms of gender and occupation. As Katy Deepwell mentions in the exhibition’s catalogue, 60–80 per cent of women in a number of countries, including Ireland, still define themselves as homemakers with children. In an increasingly fragmented economic global context, this fact gives exhibitions such as ‘Work’, a real relevance.