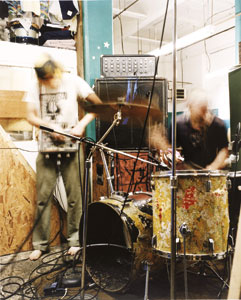 Posted from floor to ceiling in the first of two distinct exhibition spaces housing ‘Wunderground: Providence, 1995 to the Present’, some 2,000 screen-printed posters advertised exhibitions, concerts and community events held in Providence (the diminutive capital city of the smallest state in the US) since 1995. Organized venue by venue – some fleeting, some established and ongoing – from the seminal Fort Thunder and Red Rum to the less well-known such as Box of Knives and the Candle Factory, ‘Providence Poster Art’, the first part of the exhibition, reflected the vibrant activity of over 200 do-it-yourself venues based in Olneyville, a neighbourhood in West Providence.

The visual equivalent of blastbeat drumming, certain patterns and styles emerged as one’s eyes scanned the walls. Xander Marro’s intricate and mesmeric poster works for Brown Pride Month and events with the all-female collective and venue Dirt Palace invoked the spirit of fin-de-siècle Gothic Romanticism married to Haight Ashbury’s pre-Charles Manson optimism. There was also evidence of broader political affiliations and alliances, anti-war posters that advertise an educational series asking rhetorically, ‘Why the war in Iraq?’, and ‘Wars and Occupations’, a lecture by Noam Chomsky. Brian Chippendale’s intricately layered and decidedly hand-crafted posters for concerts and community activism led with somewhat tongue-in-cheek countercultural imaginary conversations between mother and child: ‘Mom, my candy’s already gone/That’s because it was hollow dear. When all you’ve got is a candy coating with nothing underneath it won’t last long.’ What was more impressive was the prolific creativity of hundreds of artists and designers too numerous to name-check.

Listening stations linked to each venue presented archived recordings from key events: Lightning Bolt (Chippendale’s seminal noise band), Arab on Radar, Throne of Blood, Necronomitron and Wolf Eyes being just some of the hundreds of bands listed in print around the room. Providence, and in particular Load Records, a local noise/experimental independent label, were responsible for putting on the national map the music of many musicians who originally played these venues. The marriage of posters and live recordings made for an intelligent and lively retelling of the decade, and somewhere between the wheat-pasted announcements and the roar of the crowd there was room enough to relive the event.

Behind such underground activity lurks a familiar tale: artists move into cheap properties, set up homes, exhibition spaces and concert venues and are closely followed by the property developers. In March 2006 Chippendale and fellow artist Matt Brinkman were evicted from Eagle Square and seminal noise venue Fort Thunder. One poster declares: ‘Olneyville needs a library not luxury lofts.’

In reference to Providence’s nomadic and repeatedly displaced renegade activity, the museum’s main gallery displayed eight artist-commissioned versions of a Utopian village. Littered with architectural structures, high towers and blobby organic forms, ‘Shangri-la-la-land’s temporary structures mirrored the activities of the venues ghost-checked in poster form next door. Marro’s fantasy cathedral Transmutation Transmission Tower (2007), complete with pots, pans and cymbals for noise production, featured peep-hole dioramas complete with peacocks and female figurines reminiscent of paintings by Gustave Moreau and Dante Gabriel Rossetti. Jim Drain’s psychedelically tinged Vertical Faces with Sculpture and Totem Pole (2007) wrapped itself around a Native American totem pole from the museum’s collection. Chippendale’s obsessively painted malevolent ode to George W. Bush, Home on the Run (2007), spoke to Mat Brinkman’s witty Maximum Ogredrive (2006), a giant papier mâché ogre with a club threatening to cleave the skull of the unsuspecting visitor. While one might infer that ‘the village’ is therefore alive and well, its retreat to, and its temporary containment within, the museum suggest its days may be numbered.

Providence, arguably the spiritual home of Edgar Allan Poe and H. P. Lovecraft, is now home to Load Records and the Dirt Palace. As with every good music fanzine, there is a sense of a scene that occurred in response to a particular localized situation and politics, here removed from the pressured and stifling sensibility of the major cities. The accompanying publication begins with an inspired foreword – one could say forewarning – by artist and Pee Wee’s Playhouse (1986) set designer Gary Panter, charting the demise of the hippie dream and the fear of the potentially creepy exploration of inner space that became Punk. As Panter notes, Punk ‘predicted “No Future”, lasted 30 years and then finally, but not lastly, when you least expected it, along comes Fort Thunder! Space hippies in crawling Archigram cities once again.’ ‘Wunderground’ deservedly recognized the passing of a specific time in one city’s alternative cultural and economic history. As such unconventional spaces are squeezed out of existence, the future, at least for a community of artists in a place such as Olneyville, may be valiantly self-organized.