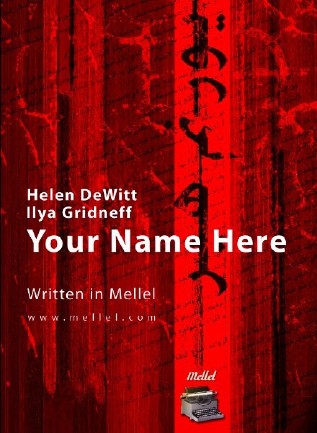 ‘I’d like to publish it in the traditional way,’ insisted Helen DeWitt, author of The Last Samurai (2000), in a recent interview about her new online-only project, Your Name Here. But for her new novel to end up in Waterstone’s or Borders would undermine its whole reason for being. The book, which can be downloaded as a PDF from DeWitt’s website for the suggested price of US$8, is predicated on its own unpublishability and is both the culmination and the chronicle of DeWitt’s fruitless attempts to find a literary outlet for Ilya Gridneff, a (real-life) Australian journalist she met in a pub in Hackney. We don’t just get Gridneff’s rollicking emails, but also the emails from agents who don’t want to take on Gridneff, the emails from DeWitt apologizing to Gridneff about the agents, and an essay or two on the cowardice of modern publishing. Even the strands of the novel that have nothing to do with Gridneff – a dystopian satire called Lotteryland, a quasi-memoir about a suicidal Oxford student, and various other mingled fictions – are mostly about rejection and exclusion. Your Name Here is really not a book that could dress up in smart hard covers and keep its rebel pride intact.

With Gridneff’s undiscovered talent used as the pretext for the whole farrago, much of Your Name Here‘s credibility rests on whether you think the journalist is deserving of DeWitt’s devotion. Indeed, Gridneff’s constant riffing, punning and ventriloquizing is often annoying rather than charmingly quirky. ‘He is […] Effortlessly offensive. Effortlessly funny,’ adds DeWitt, but nowhere in Gridneff’s despatches is there anything so jarringly comic as DeWitt’s own description, for instance, of a prostitute putting a condom on a penis, which ‘stands alertly to attention, a child submitting to scarf and mittens for a romp in the snow’. Gridneff is a good writer, but not, on this evidence, so special that we should put up with his inability or unwillingness to pay heed to usual formal restraints. At one point he considers writing ’50 000 words of travel yarns’ about ‘pakistan and iran ad turkey [sic]’ – well, why not go ahead and write them?

With the internet throwing up so many genuinely unique new voices, why should attention be paid to those who are yet to find a proper vehicle for their expression? This needn’t entail a compromising move towards the comforts of conventional novelistic form; indeed, many emerging online projects are using non-traditional forms. To take a fairly arbitrary example, Chris Onstad, creator of the Achewood webcomic, is one of the very best of these newcomers, sharing with Gridneff a boozy, broken cadence. The difference between the two approaches is that Onstad has found his perfect medium – a crudely-drawn webcomic – while Gridneff is still searching.

Are Gridneff’s emails more worthwhile for floating in the midst of all this metafictional driftwood, or less so? Certainly, DeWitt’s itching impulse to undermine her own creation is pretty disconcerting. ‘You’re extremely aggrieved,’ she writes, for instance, at the beginning of chapter eight: ‘Instead of the wealth of stories you loved in the last book there are narrative strands which you find hard to follow […] You find yourself hoping yet another flimsy pretext will be found to introduce yet another totally superfluous second-person narrator.’ DeWitt often refuses to maintain the polite illusion that she and the reader are both having a wild time, though she predictably includes a doleful preemptive self-criticism of all her doleful preemptive self-criticisms: ‘A self-referential book that raises metaphysical questions as a pretext for talking about itself, doesn’t the book simply replicate the very neurosis that makes it so hard for you to be spontaneous except in the calculating, premeditated way that made you wonder whether you were a robot in the first place?’

Your Name Here is arduous, irritating and muddled, and yet, somehow, it does have a kind of brilliance. The density of ideas is exceptional, from the principal motifs (how can we trick Tolkien readers into learning Arabic instead of Elvish?) down to the offhand remarks (succeed at online poker by playing at 9am when the maximum number of jobless alcoholics are online). A lot of this fluorescence is totally irrelevant, but it still makes the average contemporary novel look eerily vacant. The same could be said of DeWitt’s deep engagement with the software of modern life: Your Name Here is full of details about spam email and tabloid journalism and karaoke bars and student loans that are, at least for a certain type of reader, instantly recognizable; and the point is not that DeWitt includes them, as many a lazier writer would, because they are recognizable or modern, but because they give some genuine insight.

All this, of course, comes at a price. If anything in Your Name Here is extraneous, then everything is: give it to a professional editor for some judicious cuts and you wouldn’t get much back. That would be a shame, but it doesn’t mean we must agree with DeWitt about the supposed cowardice of mainstream publishing. Nor does it mean we have to find this novel superior to its less frenetic peers (who, instead of 400 ideas each, might have just one, about love or war, and not even a single knowing mention of Google or Kreuzberg or Adorno).