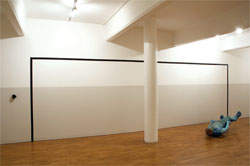 It is with good reason that dictatorships are frequently described by partisan media and politicians as having been ‘toppled’. Deliberately bringing to mind the destruction of a former regime’s statuary (as with the colossal figure of Saddam Hussein that was dragged to the ground by American tanks in Baghdad in 2003, for instance), the word deftly evokes statuesque qualities – towering, rigid and cold, but ultimately vain and hollow.

Zilvinas Landzbergas’ untitled installation featured one such toppled icon. However Landzbergas, a Lithuanian artist who undertook a residency in Oxford as part of the two-year series ‘Arrivals>New Art from the EU’, chose to make his figure far from monumental. Life-size, bare-chested and wearing baggy sweat-pants, the figure had been placed on its back on the floor in front of a gaffer-taped outline of a rectangle on the wall. Like much of the artist’s work, the object’s weightiness is illusory, constructed as it is from polystyrene and covered in thick coats of glossy paint, applied in shades of drippy blue and yellow. Somewhere between a burnished bronze antique statue and a scuffed fibreglass superhero, the figure stared lifelessly at a point far beyond the ceiling. The effectiveness of the ‘toppling’ of a monumental statue lies in the fact that one is made acutely aware of the figure’s artifice, its pompous self-importance and its ridiculousness. The naturalism of such a figure can be something to fear; however, the inability of the statue to adjust its pose in response to its new horizontal position renders it a formal object, humbly bound to its own materiality and the history of its production. As an artist who grew up in a former Soviet state in which Realism and Formalism were set in deeply political opposition to each other, Landzbergas is acutely aware of this peculiar sculptural dynamic, and the tension between these distinct aesthetic traditions tempers much of his work.

Many elements in the installation tiptoed along the edge of representation, implying and then denying narratives between themselves in a capricious and often frustrating manner. The tape wall drawing was the approximate size and proportions of a football goal; behind it, the lower part of the wall was painted grey, suggesting either a schematic horizon line or the markings on a squash court wall. As such, the prone figure on the floor in front of it might be read as a goalkeeper, were he (or it) not in such an inertly unathletic position. However, on closer inspection he appeared to have saved a goal, if the scuffed yellow doughnut wedged beneath his shoulder blades could be interpreted as a projectile of some sort. A similar-sized disc or discus lay on the floor nearby, adding to the impression that a mysterious game had recently been in progress. The scene began to coalesce into a tableau of some kind, though lacking the naturalism attempted in a museum diorama, for example, and having the stiffness of a doll’s tea party.

Other lifeless elements around the other side of the room began to complicate this impression, however. A shelf bearing a black and yellow sphere and a crumpled green form looked mysteriously functional, as did a pole leaning against the wall next to a small geometric shape, but a grubby section of plywood cladding around the lower part of a column was bafflingly ineffectual. Hasty sketches of aspects of the installation were taped to the wall, and a copy of what appeared to be the artist’s residency schedule was stuffed behind the cladding, hinting that Landzbergas made many of his decisions about installing the work in the space. Apparently the work was untitled because the artist sees the installation as a ‘work in progress’, and indeed it made most sense as a series of objects to be moved (or thrown or kicked or hit) around a specially constructed environment, the resonances and meanings created between elements remaining slippery and shifting.

To one side of the ‘goal’ a black card cone was taped to the wall, an open receptacle placed, perhaps, to catch the near misses. This small but effective device was revealing about Landzbergas’ approach – not quite large or sturdy enough to catch the missiles that might be aimed in its direction, it nevertheless seemed to invite them. In his relentless complication or avoidance of narrative and monumentality, the artist seems to be haunted by the didactic spectre of Socialist Realism. While it is often engaging to feel one’s reading of a work veering off to one side at the last minute, Landzbergas’ installation felt somewhat reticent and apologetic; receding into the fabric of an admittedly awkward space, the frequently engaging objects ultimately deadened rather than activated by their presentation together in the gallery.