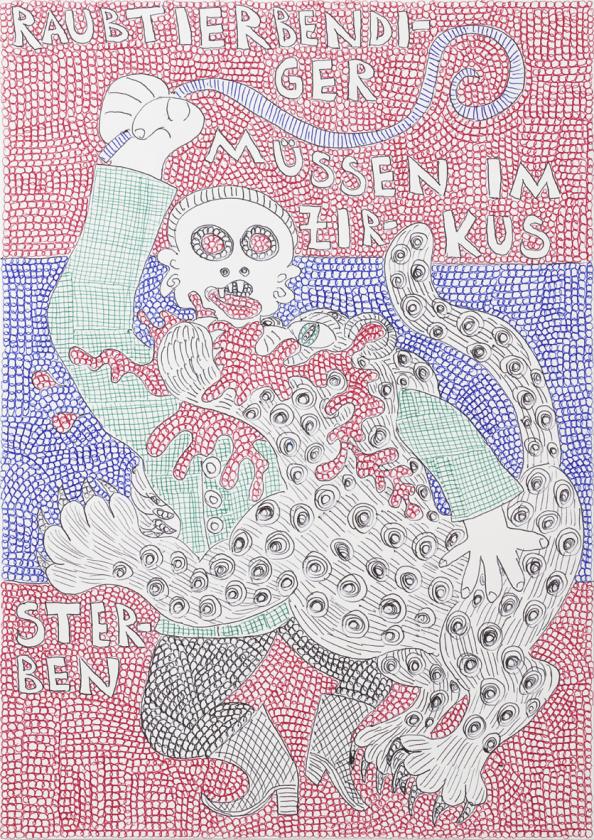 We have a tendency to believe that things change – an unfortunate byproduct of our desperate craving for ‘progression’ and ‘meaning’. It is, of course, a naïve impulse: flatten time, flatten context, and you will find that little but homogeny remains – of violence, vibrancy, faith and all the raw banality that mopes between. Andreas Maus carries out such a levelling. His drawings tempt in a wide range of settings and scenarios: a bulbous Kaiser Wilhelm II berates at the outbreak of World War I; a circus trainer is mauled by a big cat; an AfD henchman sees a chainsaw rip through his crown; Donald Trump flees an expiating wall of flames. But thanks to a uniting medium (biro), colour scheme (red, blue, black, green) and technique (near-obsessive circular marks), these disparate scenes appear as consecutive stills from the same narrative strip. Maus visually flattens the contexts and time-frames and, in doing so, illustrates how the various small tragedies of our current era are little but repetitions of those which have come before. Approached from one angle, the reading is bleak; terrors are frequent, in spite of them frequently being declared dead. Approached from another, the outlook is brighter: the many maladies of the contemporary ages can, ultimately, be felled, as they have been so many times before.