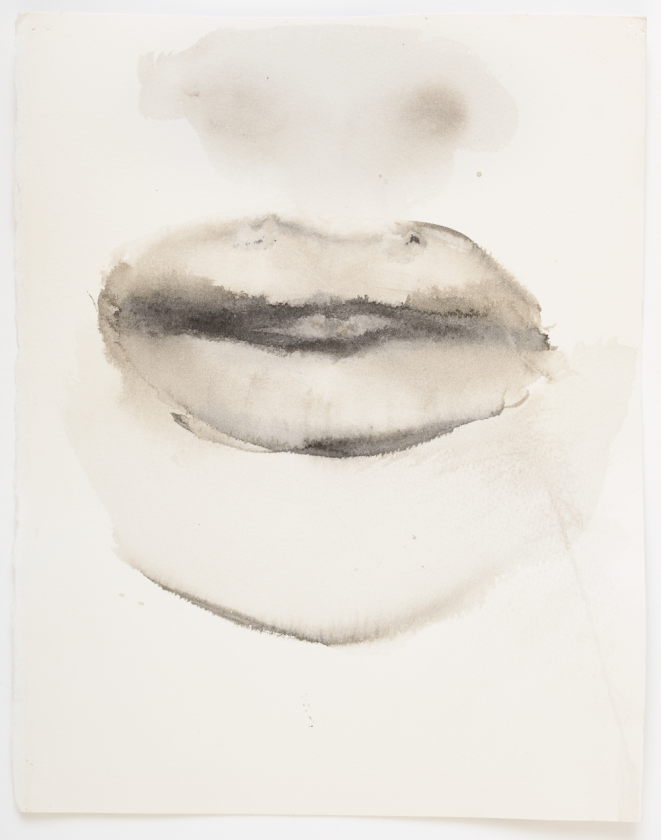 In ‘Venus & Adonis’, one of Shakespeare’s few long poems, Venus becomes impatient with the hunter Adonis – the child of a tree – for refusing to kiss her. She is tormented by his indifference, and in turn by her own immortality, for she suspects his apathy is because she is a god and not a woman. No matter, for soon Venus finds Adonis’s purple corpse in the woods, slain by a boar. His death produces a single flower, coloured the same as Adonis’s flesh, that Venus weeps over. Such are the cruel symmetries that define the ancient world. In her first New York exhibition in eight years, Marlene Dumas has illustrated this poem – and the moody emotionality of those symmetries – in numerous paintings on canvas and paper (all ranging widely in size), each in her eerie, watery style. Dumas depicts Venus as a pleading figure, as the titles of her ink wash drawings (each slightly larger than the size of an A4 paper) of the god make clear: Venus pleads, Venus forces, Venus insists (all 2015–16). Paintings and drawings from 2018 continue Shakespeare’s themes without explicitly illustrating the poem, including pregnant bodies, kissing couples, an iPhone, nipples and so on. In these cloudy, pretty pictures, Dumas recasts Venus’s complaint of representation as ‘lifeless, cold and senseless stone, / well-painted idol, image dun and dead’ as its best asset in capturing the god’s stark loss of her mortal lover to nature’s brainless and bloody aggression.