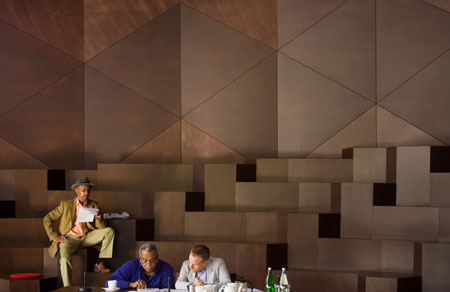 The subtly disorientating laboratory space of Olafur Eliasson and Kjetil Thorsen’s Serpentine Gallery Pavilion – the outlandish, conical, UFO-like structure that seems to have landed on the lawn outside the gallery – was an ideal setting for this ‘poetic exchange’ between the writer Édouard Glissant and the Reggae poet Linton Kwesi Johnson. They were brought together by the memory of a mutual acquaintance: the Jamaican poet Michael Smith (1954–1983). Glissant, a poet, novelist and essayist born in Martinique in 1928, was billed as speaking about his latest book of essays, Une nouvelle région du monde (A New Region of the World, 2006). He ended up delivering a new text co-authored with fellow Martiniquan writer Patrick Chamoiseau, while Johnson gave a talk on ‘Mikey’ Smith’s life and work.

As Johnson tells it, Smith was a prodigiously talented poet and perform-er, whose death is still surrounded by shadows: he was killed in dubious circumstances after heckling a Jamaican Labour Party minister at a political meeting. After reciting Smith’s most famous poem, ‘Mi Cyaan Believe It’ (1982), Johnson spoke of how he first met Smith in Kingston in 1980, and of their subsequent encounters over three years. Yet his terse portrait was far from hagiography, also alluding to some of Smith’s failings and his paralysing fear of performance. In his direct, unembroidered, factual account Johnson highlighted the pivotal role he played in Smith’s career, before speaking more generally about ‘dub poetry’. It was a careful, restrained talk, introducing Smith well but leaving an ambivalent aura around him.

Glissant followed with a reading of his text ‘The Walls’ in French, after a translation – prepared that day – was handed out. In his books of essays, such as his series of five Poétiques (1956–2005), Glissant writes a brilliantly free-ranging prose, fusing discussions of ideas and other writers with fragments of his own memories and reflections. He often transcends logical argument, setting up poetical chains of association that fold political and personal concerns deeply into each other. The unpublished text he read out, criticizing the new French Ministry of Immigration, circled around what he terms mondialité or ‘worldliness’, global borders, the role of imagination and the protean nature of identity. Yet ironically, as Glissant spoke in his high, strident, lilting voice, his poetic text was utterly hamstrung by the poor translation.

The subsequent Q&A session was also notable mainly for its failures in communication, and not merely resulting from language barriers. Rather than any exchange, what became apparent was the huge difference in Johnson and Glissant’s approaches. Johnson came across as a very practical figure, firmly rooted in the problems of the here and now, while Glissant is a self-confessed ideas man. Instead of balancing or challenging each other, they remained so far apart that there seemed to be surprisingly little common ground between them. ‘You can feel that the world is trembling, is tremoring,’ Glissant said emphatically, towards the end of the debate, in English; this evening largely just measured the size of the cracks.