The largest exhibition of contemporary art in Central Europe 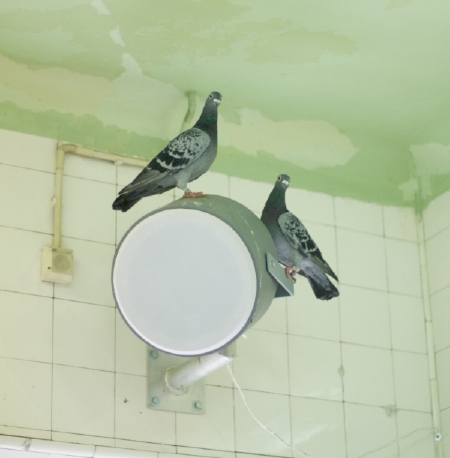 Big, sprawling and a little disorientating, the second edition of Poznan’s ‘Mediations Biennale’ has this year exploded into what organizers describe as the largest exhibition of contemporary art in Central Europe. How the various parameters of that statement are arrived at is open to question, but there can be no doubt that Mediations is bigger than many of Europe’s other biennials. Bringing together the work of more than 150 international artists, with an emphasis on uniting work from Europe and Asia, the Biennale is both an expansive festival of arts and an open exercise in co-opting contemporary art as a beacon for regional promotion. (The Biennale’s opening was timed to coincide with the 4th ASEM Conference of Cultural Ministers, a grand political gathering of secretaries of state from 48 countries.)

Amidst the flood of art on show in Poznan are enough intriguing surprises and moments of quality to suggest the Biennale is already establishing itself as an event of genuine regional importance. Future editions, though, would benefit were organizers to achieve greater focus, having confidence in the ability of a leaner exhibition programme to engage and enthral.

Alongside a series of accompanying shows, Mediations 2010 is structured primarily around two sizeable exhibitions, ‘Beyond Mediations’ and ‘Erased Walls’, with each variously staged in their own dedicated spaces, as well as being brought together in the ZAMEK Cultural Centre (above). ‘Beyond Mediations’ is the less successful: complicated to navigate and uncertain in purpose, the show drifts along, in essence little more than a collective display of European and Asian new media art. Too much of the work is uninspired, overly reliant on gadgetry and moody soundtracks, rarely seeming particularly clever or new.

What lifts the experience of viewing ‘Beyond Mediations’ is the fact that much of the exhibition takes place across three floors of the vast ZAMEK centre. This cavernous folly, built to resemble a medieval castle, rises in central Poznan as though it were the plaything of a dictator (the building’s exaggerated proportions and amalgamation of classical and Germanic architecture were perhaps the reason Hitler earmarked it as a potential residence.) Of the better works on display, most striking is Masaki Fujihata’s installation Private Room/TV (2009), which is staged in isolation in an imposing chamber, part bathhouse, part Roman temple. The work itself – a chair and hut constructed from neon strip lights hissing with static and broken dialogue – muses on memories of analogue television and the TV set as the centre of the global home. Throbbing with bright light, though, space and work interact in a way separate to Fujihata’s original intention, becoming less sure, more ethereal. Other works of note here include a well-handled reconstruction of Marie-Jo Lafontaine’s sound and sculpture installation, The World Starts Every Minute (2007), and two recent films, Energetic Concerto and Luftmassage (both 2009), by influential Polish veteran video artist Jozef Robakowski.

Where ‘Beyond Mediations’ interests only in parts, ‘Erased Walls’ proves a much more successful exhibition. Based mainly in an abandoned hospital on the outskirts of central Poznan (above), the visitor experience lives up to the expectation of finding at a Biennale something beyond the exhibition norm. Collaboratively researched by a range of curators, including the Biennale’s Director Tomasz Wendland and Berlin-based Marianna Wagner-Simon, with future editions to be held in Bratislava and Berlin, the exhibition assumes an ambitious agenda to both examine and invigorate the mindset of post-communist Central Europe, positing the thesis that, while state borders have become porous, national identities continue to render neighbours as strangers. It is an outlook partly inspired by Joseph Beuys’ 1978 call for Central Europe to come together beyond boundaries – ‘to cohabit and collaborate’ as the precedent for ‘a new social future’. Attempting to distil such a goal into an exhibition format would seem to handicap ‘Erased Walls’ with an unrealizable concept. Allowing the curators a little leeway, though, means you can ignore questions as to the success of addressing such a broad field, focusing instead on the more immediate impact of the art on show.

Hidden along a nondescript, leafy side street, with few passers-by and little noticeable activity, the old hospital building has the initial feel of an abandoned exhibition, a section of Biennale forgotten in its residential hinterland. Arriving at the vacant compound it is unclear where should enter or if you should be there at all. Winding across the ground floor as you enter through an open door, though, German artist Volker Marz’ installation, Kafka in Israel Nr.3 (2006/10), is an artistic riot, unequivocally enveloping the hospital within the Biennale’s cultural umbrella. The work, which Marz has previously staged in different guises, comprises clay mobiles of naked figures dangle from the ceilings, with other figures lining the broken tile-lined walls. Narrating the fictional life of Kafka in Israel, after his actual death, the story unravels across various rooms, at one point climbing over defunct toilet cubicles. The aesthetic and style are not Kafka’s, but the immersive experience prevails, sustaining a suitably Kafkaesque tale of absurdity – of the individual fighting against a blindly cruel world.

Close to Marz’ brazen installation, Polish artist Cezary Klimaszewski’s mock-up of a small World War II remote-controlled tank, Goliath (2007), is a more subtle meditation on violence. Klimaszewski’s interest is in neutralizing a killing-machine, but the work also brings to mind the surreal abhorrence of an environmentally friendly war. On the floors above, along the hospital’s tarnished corridors, much of ‘Erased Walls’ is dark in tone, incorporating works that are unflinching in their depiction of uncomfortable subjects – Estonian artist Jann Toomik’s video, Invisible Pearls (2004), showing men stamping holes into their penises with unsanitary implements in order to insert beads for the sexual gratification of their partners, or Ruti Sela and Maayan Amir’s video, Beyond Guilt – The Trilogy (2003–5), which visibly documents sexual activity, interspersed by racist dialogue, amongst a group of Israeli youths.

Why so much of the work deals with the Israeli–Palestinian conflict is one of the questions that crops up when considering the Central European context this exhibition is trying to address – the subject area fits the idea of erasing walls, but the geographic drift would seem to extend too far. Also clear is that the negative content far outweighs any positive hope for the future. The curators do, though, succeed in presenting a broad range of reflections on the plethora of social barriers that remain in the post-Cold War environment of free, democratic nations. The most affecting work, however, is perhaps Oliver Kunkel’s haunting installation, Sleeping Beauty Syndrome II (2009), in which live pigeons inhabit an operating room, the smell of their droppings consuming the space as a whispered soundtrack speaks of social engineering and subliminal messages. Sidestepping the complications of the overarching concept, and simply embracing the individualism of such works is ultimately the best way to approach ‘Erased Walls’, accepting, as Tomasz Wendland writes in the accompanying catalogue statement, that, ‘A work of art should not always be seen as a reflection of the artists position, but more as a question or a thesis raised by the artist.’ No answers then, but a lot to consider.The Mediations Biennale runs until 30th October 2010.