The 31st Bienal de São Paulo was a boisterous, demanding exhibition, yet also mysterious. Its title ‘How to (…) Things that Don’t Exist’ called for an undefined activity relating to nothing in particular. It was an exhibition about the ‘contemporary condition’, as the seven curators, led by Charles Esche, noted in their brief, collective catalogue essay. The ‘How to … ’ of the title suggested an exhibition asking for engagement, demonstrating ways of doing things. The ellipsis was most often replaced in printed materials with ‘talk about’, suggesting the works and the show as a whole as models for dialogue. Elsewhere, it meant ‘learn about’, ‘imagine’, ‘become’, ‘read’, ‘find’; as the exhibition guide suggested: ‘The range of possibilities for action and intervention is open.’ It’s as though the curators were looking for a way to say nothing, to remove themselves and their perspectives from the field of engagement and leave it up to the artworks and the audience to decide what to do. 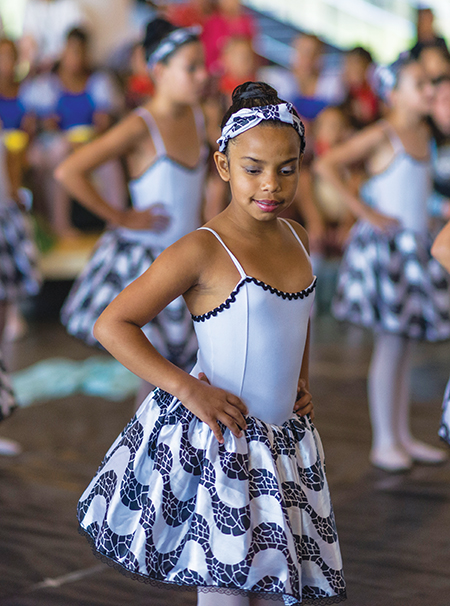 Children of the Jd. Valquíria community participating in the NGO Capão Cidadão’s dance workshops at the Bienal São Paulo

But we must do something. And, despite the call for openness, the exhibition was highly choreographed, if often cacophonous. Its treatment of Oscar Niemeyer’s bienal pavilion space underscored a prevailing tension between active and abstract engagements with the present. Architect and curator Oren Segev created three areas within the bienal pavilion – ‘Park’, ‘Ramp’ and ‘Columns’ – addressing the scale and features of the building. The three zones were intended to determine distinct experiences and behaviours for exhibition visitors.

At the entrance to the show, via the cavernous ground floor of the pavilion, the curators moved the ticket turnstiles and metal detectors away from the doors to create a flexible public space, to be used by anyone for anything, in theory. Called the ‘Park’, referring to the surrounding Ibirapuera Park, it was dominated by a serpentine wooden structure with areas constructed for dialogue and performance. During a Sunday afternoon visit, I saw appearances by a children’s choir performing Michael Jackson songs and contemporary dancers intertwined in groups, but seemingly unnoticed by anyone nearby. Things were happening, but compared to the park outside – filled with skateboarding teenagers, families picnicking, ice-cream vendors and so on – it felt serene.

The second area, the ‘Ramp’, spiralled up the famous core of the building. Loud, disorienting and dense, the sound of artworks bled and echoed around this end of the pavilion. Most works in this section had messages, some announced a little too directly, as in the yellow posters of Juan Carlos Romero’s 1973–77 project shouting ‘VIOLENCIA’ (Violence) behind bloody images of conflict in the artist’s native Argentina. Others were more coded. A highlight was Yochai Avrahami’s Small World (2014) – a crazy funhouse, emptied of fun. Visitors followed a ramp through a structure devoid of mirrors or clown faces to a circular room with images of intent and concerned-looking people staring into the centre of the chamber, at nothing.

There was also an emphasis in this area on participation, whether through copious reading about a radical Catalan educator in Archivo F.X. and Pedro G. Romero’s The Modern School (2014) or singing karaoke and contributing to a map of São Paulo in Indonesian collective Ruangrupa’s evolving installation RURU (2011–ongoing). In The Uncounted: A Triptych (2014) Colombia’s Mapa Teatro – Laboratorio de artistas welcomed visitors into a mysterious and beguiling three-part environment. Those entering through one door saw, behind glass, others coming in through another door, who appeared as though they were amongst the remnants of a child’s birthday party. But there were hints of violence in the sounds and moving images inside – the sound of a narco-trafficker railing about the legalization of drugs and fleeting projected images of revellers wielding whips: we just missed the party, and it wasn’t much fun.

Passing through a central core where escalators connected floors, visitors entered the ‘Columns’ area. Where the ‘Ramp’ was bright and loud, the ‘Columns’ were dark and moody. Here the experience was still dense but more intimate and affecting, a maze of walls and flickering moving images. At the very end of the space, nearly hidden, Arthur Scovino, an artist who had never before shown outside of Salvador, created his Casa de Caboclo (The Caboclo House, 2014). In a domestic-seeming suite of rooms that Scovino constantly transformed, visitors encountered ritual symbols for the practice of the Afro-Brazilian religion Candomblé. Religion and mysticism were strong themes in this section and, while these forces maintain their significance worldwide and might suggest models for collectivity, most of the works here privileged individual experiences of transformation. The kind of direct action that these works intimate is abstract.

Nevertheless, the 31st Bienal’s emphasis on contemporary realities provided a ripe occasion for conversation about the efficacy of biennial-making at this unsettled global moment. In late November, the exhibition hosted the second World Biennial Forum (WBF), convening 135 international professionals to discuss ‘How to Make Biennials in Contemporary Times’. Organized by the Biennial Foundation, an international network for knowledge exchange about contemporary art biennials, the WBF opened with Peter Osborne’s exhortation to redefine the relationship between the biennial form and the present. The prevailing tendency in biennial practice, he suggests, is to historicize the contemporary, finding traces of the present in the past. Instead, he asked that biennials orient themselves toward an immediate present, a time of ‘utterance, enunciation and action … of the production of a qualitatively different future’. The 31st Bienal was an interesting test case for this reorientation: what kind of future does it point towards and how do we get there?

The WBF was itself characterized by a tension between addressing the strategies and urgencies of exhibition-making now, and a general reflection on the historical condition of the biennial form. The 31st Bienal was not officially visited by WBF participants until the final day and studiously avoided as a topic by most speakers in favour of previous biennials in São Paulo and elsewhere. The curatorial team, though mostly present, kept their contributions minimal. The process of making the exhibition, particularly the realities the curators encountered in São Paulo and in forums held around Brazil, was barely mentioned. Controversies around the Bienal, in relation to funding sources and the exhibition’s mixed public response, were also avoided. (In August last year, artists sent an open letter calling for funding from the Israeli government to be returned.) This despite ‘conflict’ being one of the curators’ stated concerns. 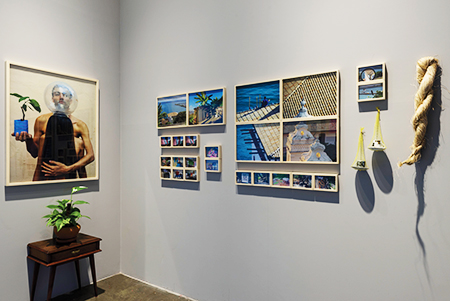 Instead, some of the strongest contributions were preoccupied with history. Writer Lucy Steeds’s presentation traced the dramatically different appearance across three biennials in the late 1980s of Juraci Dórea’s Projeto Terra (Project Earth, 1981–88), in which the artist created and documented sculptures resembling makeshift shelters made from logs and cowhides in the Bahia countryside. Steeds traced how the project’s varying iterations reflected the ideology of each exhibition. Fernando Oliva, co-curator of the 3rd Bahia Biennial last year, talked about the significance of that event’s restaging after the second edition was censored by the dictatorship in 1968. Curators Reem Fadda and Elvira Dyangani Ose made the most convincing case for present action and new models of exhibition practice. Both challenged the creeping assertion that, for biennials, bigger is better. For Fadda, with Liminal Spaces and the Riwaq Biennale in Palestine, and Ose, with the Lubumbashi Bienniale in the Democratic Republic of Congo, deep knowledge of and sensitivity toward context and audience, and a tactical approach to deploying limited resources are key.

In general, the context queried by the WBF was the ‘Global South’, defined by Esche early on as recognition of a shared experience among postcolonial societies worldwide. This idea and its utility were necessarily unresolved: for art historian Anthony Gardner the ‘south’ is a ‘method’ for exhibition-making characterized by what he described as a productive precarity and informality. Marina Fokidis of Kunsthalle Athena echoed this but suggested that ‘south’ was not a geographical or postcolonial condition, but rather a ‘state of mind’ – as relevant in Greece as it is in Africa or Indonesia. 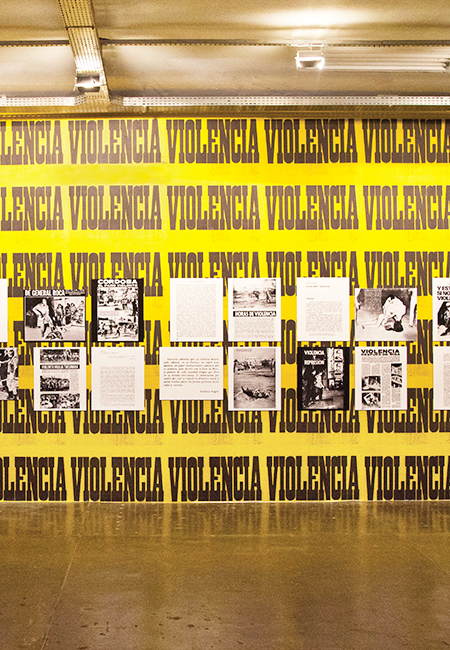 Curiously, then, the 31st Bienal largely sidestepped its geographical significance with one important exception: an elegant installation of Juan Downey’s masterful Video Trans Americas (1973–76) occupying the centre of the ‘Columns’ area. Downey shot 14 videos while travelling from North America through Central and South America, recording the indigenous cultures he encountered and playing back the video to the communities he filmed. Referring to himself as a ‘cultural communicant’, Downey aimed to identify and create connections across a disparate geography.

The prominent inclusion of this oft-exhibited work surprised me, as its engagement with its subject matter is so direct. Much of the show avoided addressing the nature of particular places, tending towards general or imaginative perspectives. Video Trans Americas made the show’s most declarative statement about its broader location. Many in the WBF discussed the São Paulo Bienal’s status as the oldest and most prominent biennial in the hemisphere, and therefore its relation to a politics of representation; as Ivo Mesquita, co-curator of the ‘empty’ 28th Bienal said in his closing address, despite its efforts at cosmopolitanism, São Paulo has always been seen as a Latin American biennial. It was telling, then, that Downey’s work appeared in a space referred to as the ‘dark heart’ in the catalogue, as though the specificities and the geographies he addresses were haunting the show.

While I was in São Paulo, US cities erupted in protest as police involved in civilian deaths avoided indictment. I saw a march in São Paulo too, this time in support of the police following the killing of an officer in a Rio favela; as conflicts unfolded around the 2014 World Cup and a divisive recent election, these marches have become an increasingly common sight in Brazil over the past 18 months. I had travelled to São Paulo from Mexico City where the disappearance of 43 students sparked enormous demonstrations; this very real absence has caused all segments of society to recognize the need for collective action to bring about change. Indeed, the messages and concerns across the three countries, and others, point to increasingly shared and interconnected American problems requiring a common response. Neither the WBF nor the São Paulo Bienal made clear what this response should be, even though they certainly underscored the urgency of developing one. Perhaps signalling urgency is the job of artists and curators, while the streets point the way to real action, now.