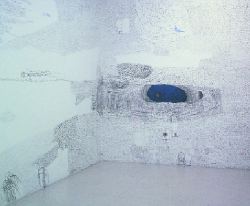 Conceived as a site-specific project for the Drawing Center's Drawing Room, Brazilian artist Adrianne Gallinari's installation covered the narrow walls of the space with erratic scrawls and simple anthropomorphic forms which punctuated the large white space with hints of colour. Sentences clawed and climbed the walls, unleashing mountains, valleys and paths that spiralled inward like the residue of a subterranean journey. Tiny figures were shown with organs intertwined, while others drifted, enveloped in rectangular webbing. A moon-like orb, perched knee-high, seemed somehow stunted, like a flag flown at half-mast.

Spare and sprawling, Gallinari's pictures are built upon a landscape of barely legible Portugese text. Like finding a diary in another language, the possibility of translation was present, but even without it the viewer could still respond to the material qualities of the language. Writing becomes drawing and drawing becomes a process of projection, conjecture, assumption and feeling. The heavy, hurried script - without breaks, punctuation, corrections or self-censorship - could be read as a cathartic diary, an ambivalent litany, a confession, or a mapping of loss tinged with desire.

A sense of uncertainty was enacted through silhouettes of women: one pregnant, her sides stitched with drawn thread, carried not a child but a marble bust; another woman, a curvaceous nude, was topped with a feathery red bird's head. Others were trapped, encased in a leaf-shaped cloud, or held far below the surface of an inky lake. Gallinari crudely outlined their faces and heads, classified and labelled their surfaces and then divided them into two sections: 'mother' and 'father'.

As though sketching an incomplete dream, Gallinari's preoccupations with memory and distance recur in fragile, dark scribbles, which convey a longing that was articulated in one word, repeated over and over again: saudade (yearning). It's a feeling that could be read as a kind of wanderlust, a desire to traverse time and memory.

Cryptic and abstract, Gallinari's introspection is familiar but ultimately private, too vague to grasp fully. There was a seeming incongruity between the drawings and the texts, an area of slippage that recalled the work of Cy Twombly or the combined poetry and photographs of Cecilia Vicuña. Gallinari's intense black crayon and visceral, somewhat sorrowful creations are also reminiscent of the American poet Kenneth Patchen, who towards the end of his life combined poetry and drawings in a collection known as Wonderings (1971). Gallinari's transitory creations communicate through an economy of shape and colour, and evoke a sensitive vocabulary of familiar emotions - a diary turned sketchbook, which lays bare the vulnerability of immersion.