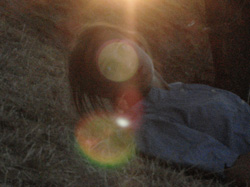 The phenomenon of ‘orbs’ in photographs – the circles of light caused by a camera flash catching particles of dust or moisture in the air – is credited by mystics and Fortean Times subscribers with offering access to some form of spirit realm. The starting-point for ‘Tunnel Like a Tail’, Agnieszka Brzezanska’s first solo show in the UK, is the way in which these oddities, invisible to the naked eye, can by chance come to veil the intended subject of a photograph. This delightfully enigmatic show comprised just ten photographs and five paintings (all works untitled, 2006), all of which are bound by a quiet sense of wonder at how easily physical objects may be interchanged with these intangible anomalies.

As the exhibition’s title, taken from a poem by fellow Pole Miron Bialoszewski, suggests, Brzezanska is preoccupied with finding likenesses between the seemingly disparate. She played with the idea of binaries in last year’s show at the Centre for Contemporary Art in Warsaw, ‘The Opposite of the Opposite, And the Opposite of That’, but here it is often difficult to discern exactly what an object is. Everything that passes before Brzezanska’s lens becomes somehow contingent: the clouds in her night-time photographs seem no more than accidental smears, caused by a stray thumb in the dark-room, while the moon that lights them could easily be just another speck of dust. These photographs are so muted, are we able to say for sure that anything has occurred?

Brzezanska cites the Swiss mystic and artist Emma Kunz (1892–1963) as an influence. Like Hilma af Klint and Agnes Martin, Kunz approached Geometric Abstraction as a means of structuring spiritual ideas, of representing elements of an unseen world. Brzezanska notices how the specks in her photographs are aligned, tracing a beam of light and diminishing in size as they lead towards its source. The seeming randomness of the orbs’ appearance in photographs is formalized in the delicate concentric circles of the paintings. While orbs are only made visible in photographs, some of Brzezanska’s geometric abstractions are painted in a pearl-white that is impossible to capture on camera, the unframed canvases appearing blank and merging with the white wall behind. Nature recedes slightly in the photographs and becomes completely painted out as the abstractions are heightened.

Kunz once described her own work as ‘shape and form expressed as measurement, rhythm, symbol and transformation of figure and principle’. However, the subtle transformations carried out in ‘Tunnel Like a Tail’ are never schematized, and, although the exhibition suggests a chronological progression in which the paintings constitute the latter stage, any overarching sequence is left obscure. The luminous canvases resist being documented, while in the photographs there is a sense of an arcane and arrested narrative just out of grasp, of a state of continuous play hidden behind the uniformly mundane. Through a screen of falling snowflakes is revealed a carving of a satyr that, if you look carefully, appears to be chasing a figure pushing a pineapple. Elsewhere there is a close-up of a pair of disembodied hands holding a plastic eyeball. The joke here is obvious: the belief in orbs as evidence of the paranormal is bathetically punctured, as the circular form is substituted for a cheap children’s toy. Far from monumentalizing the mundane, this is a case of finding similarities so far-flung that the likeness is stretched to breaking-point. Why credit a lowly speck of dust with providing a mystical portal when it may be replaced with a plastic prop? However playful they may sometimes seem, Brzezanska’s fugitive pieces modestly proffer glimpses of some order, yet never insist on what that order may be.