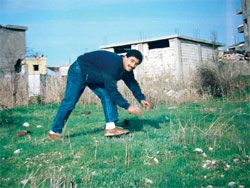 The first thing encountered was a reading table covered with publications and rows of postcards showing vintage photographs of Arab citizens. This was not a cash-strapped institution’s hard sell of exhibition-
related items, but a way of introducing the realm in which Akram Zaatari works; all the items relate to his ongoing efforts for the Arab Image Foundation, which he co-founded, dedicated to the preservation of documents from the Middle East and North Africa. Zaatari is from Lebanon, a country whose history is marred by both physical annihilation and memory-related erosion, and his artistic practice is bound to a concept of salvaging the past, of preserving documents and collecting stories that contrast with the official state version of history. ‘Diversity’, he once stated in an interview, ‘is the most important factor in resisting collective misrepresentations […]. Focusing on individuality thus becomes a political mission.’
Zaatari’s work is indeed political, but not heavy-handed, didactic or polemical. He creates films that are charming, delicate and intimate, revealing aspects of his own life and of other people’s, illustrating how broad governmental decisions affect specific personal lives. Often there is an element of investigation or pursuit, starting with a premise or a clue, which Zaatari follows to its end, fleshing out a story, recording his alternative history.
How I Love You (2001) opens with a typed chat-room conversation, where the artist tries to find gay men – criminals under Lebanese law – willing to talk on camera about the passions they cannot otherwise express freely. Zaatari veils their identities not with a clichéd dark silhouette but with lighting so bright that their features are bleached out. In Her + Him, Van Leo (2001) a journey is instigated by a photograph of the narrator’s grandmother, posing naked in a professional studio. The printed signature ‘Van Leo’ leads Zaatari to Cairo, where the Armenian-Egyptian photographer settled in 1924 and opened a portrait studio in 1947. The piece weaves the moving colour portrait of this ageing artist together with his monochrome portraits. This contrast of images and of classic and modern techniques – split screen, electronic colouring, the layering of Arabic script over the picture – articulates an unspoken commentary on the fundamental changes over the last 50 years in both artistic practice and Egypt’s socio-political reality.
The effects of war were addressed in a darkened room, in a display case of the artist’s diaries from 1982 (the year of the Israeli invasion), in which Zaatari noted military movements alongside the weather and films he had seen. A photo album of snapshots that the 16-year-old shot from his balcony, show massive explosions from repeated air strikes. Six of these photographs were filmed in sequence and, together with a recording of F-16s screaming overhead, the 76-second video This Day June 06, 1982 (2003) gives a short but startling portrait of a teenager’s daily reality.
In This House (2004) does more than metaphorically dig; here the artist actually burrows into the garden of a private home. Zaatari discovered that Ali Hashisha, a well-known photojournalist, had formerly been a freedom fighter with the Democratic Popular Party and, as the leader of a militia group, had used the house as a hideout for six years. As Ali explains on camera, in 1992, when the militias were disbanded, he wrote a letter to the displaced owners of the house, explaining the group’s mission and expressing gratitude for the ‘loan’, then hid it in the garden encased in a mortar shell. The film literally unearths this part of both his past and Lebanese history: images of Ali’s press credentials, newspapers with his photojournalist war images, personal photographic souvenirs from the front and pictures from his childhood flash past on one side of the screen, while on the other side a video shows the progress of the hunt for the letter. While the digging continues, Ali describes how the white of the building had signified hope, how he tried to maintain the land despite the constant search for wood, disallowing the felling of a 25-year-old olive tree because ‘what kind of human gesture would that be?’
As the show’s title, ‘Unfolding’, suggested, history is always in the process of being rewritten and, as the letter is finally unearthed, unfolded and read, the mass of people who had joined the search – workers, a policeman, the house owner, his wife, and a military representative (in case the mortar was live) – all come away with a new view of what had once come to pass.