During the Easter holidays in 2013, a young visitor to Glasgow’s Kelvingrove Art Gallery and Museum, ignoring instructions, reached out to stroke the trunk of Sir Roger, the stuffed former circus elephant that has been a highlight of the collection since the early 1900s. The tip of the trunk broke off. Experts were called in to restore the aged proboscis to its former glory. Kelvingrove is an eccentric place: suits of armour rub shoulders with Dutch old master paintings, Charles Rennie Mackintosh-designed cutlery and pinned butterflies. In the barrel-vaulted entrance hall, the magnificent organ is played daily. It’s a good place for a fertile imagination. Alasdair Gray, born across town in Riddrie in 1934, began attending Miss Jean Irwin’s Saturday morning art classes at the museum in the years after World War II. A number of prodigiously early works from this period were included in ‘From the Personal to the Universal’ – a compact, but perfectly formed, retrospective of Gray’s paintings, curated by Sorcha Dallas – on show in the basement’s temporary exhibition wing.

On one level, this was a straightforward show making a claim for the artist as a local hero. Now 80, Gray has spent his career making pictures of his hometown in words and in images but, although his nine novels are internationally known, the city has not always recognized his visual output. The first room established Gray’s Glasgow-educated credentials – his artistic initiation at Kelvingrove and his formal training at the Glasgow School of Art – with the central portion of the exhibition dedicated to works from ‘The Continuous Glasgow Show’. As a salaried ‘Artist Recorder’, Gray was commissioned to paint this remarkable series of 32 portraits of the city and its inhabitants in 1977 by Elspeth King, the curator of the People’s Palace, Glasgow’s social history museum. He documented the city at a testing moment: as with all of Britain’s once-great industrial centres, by the 1970s, Glasgow’s primary industries – the Clyde shipyards and the steelworks and the manufacturing plants that depended on them – were in terminal decline. Postwar slum-clearing projects had flattened many of the city’s traditional tenement buildings, replacing them with modernist housing blocks, often outside the town centre.

In one street scene, London Road Between Templeton’s Carpet Factory and Monaco Bar (1977), pencil-outlined women with handbags and overcoats cross the road under a gauzy blue expanse of sky, which clings to the low roofs of the buildings and fills the gaping spaces between them. It is as though the people are in a kind of limbo, not yet part of whatever future awaits them. Other cityscapes are similarly full of holes – gaps between buildings, flattened patches of ground. If, at times, Gray’s graphic style makes Glasgow look like a set, with flattened, cardboard facades, as though acting a version of itself, this might be because the city in the 1970s was still suffering the identity crisis of de-industrialization. There is nothing overtly political about Gray’s paintings, other than what could be described as a profoundly democratic attention paid to all sectors of society: journalists, artists, professors, Labour and Conservative politicians, Catholic priests, Baptist pastors, hoteliers, factory workers, students, trade unionists, friends and family are all painted with an equal, calm dignity.

Gray has a particular ability to combine the archetype and the individual in a single portrait. In formal terms, this might have something to do with his distinctive use of multiple perspectives. Think of the famous Cowcaddens Streetscape in the Fifties (1964), extending across the back wall of the Kelvingrove: the whole of Glasgow is compressed into three converging streets, which seem to disappear towards three separate vanishing points. The effect is one of pervasive strangeness. The scene, with its gloaming, smog-blotted sky, recalls a Blakean vision of Inferno. ‘I was no enemy of conventional perspective,’ Gray has said, ‘but I knew a picture could combine several viewpoints, therefore as many perspectives.’ 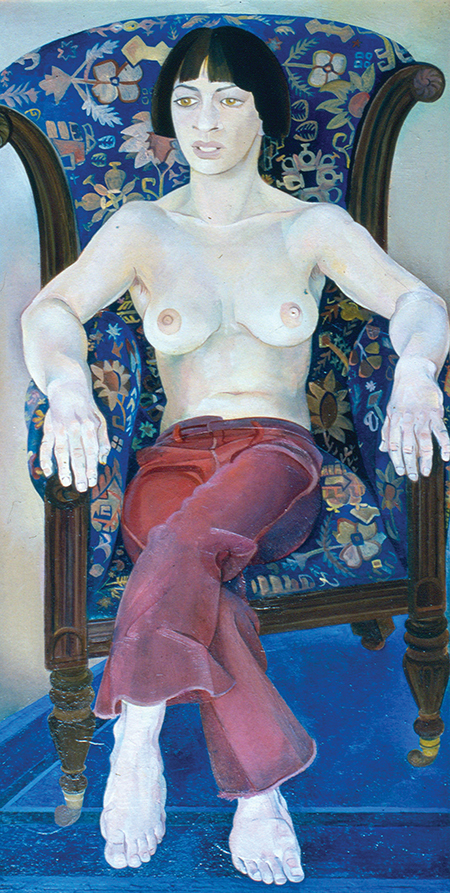 I loved this exhibition’s wall labels. One next to A Charm Against Serpents (1962) – a long panel (not part of ‘Continuous Glasgow’) of flag-bearing, sunken-cheeked priests holding flagpoles and tawny centaurs stabbing yellow-mouthed snakes – stated: ‘This painting is a collage of nine chipboard panels using heraldic symbols. They were improvised for fun and there is no profound symbolism in them.’ A sensible and refreshing caution against over-interpretation. But this isn’t quite the whole truth: no-one in the West can innocently paint a snake. And, moreover, in Gray’s work, you have the impression that everything has a particular symbolism – even if it belongs to a personal mythology that is entirely, impenetrably, the artist’s own.

Even the most social-realist of scenes here has an element of unexpected, near-hallucinatory detail, as though Gray couldn’t quite tether his flighty imagination. A 1977 family portrait of the trade unionist Jimmy Reid has all of the serene elegance of David Hockney’s cool-hued Mr and Mrs Clark and Percy (1970–71), and shares its languid symbolism: a tiny statue of an elephant stands on a low window ledge; in the distance rolls an unexpected bucolic green expanse. Elsewhere, in the portrait Juliet in Red Trousers (1976), the flowers strewn across the high-backed armchair that engulfs the young woman – who has the bare breasts and almond eyes of a statue of Cleopatra – form a pattern that is part-hieroglyph, part the millefleur background of a medieval tapestry.

Such are the small, wonderful oddities of Gray’s world. It takes a particular, peculiar kind of imagination to transform someone into an Egyptian queen whilst leaving her in red bell-bottoms (like Juliet) or to make the danger on a Snakes and Ladders board feel ominously real. (One appears in a dream-sequence painting made for Now and Then, a collaboration with Liz Lochead for an unrealized short film, commissioned in 1971 by BBC Scotland.) The exhibition mentions Joyce Cary’s novel The Horse’s Mouth (1944) as one of Gray’s early inspirations. It opens: ‘I was walking by the Thames. Half-past morning on an autumn day. Sun in a mist. Like an orange in a fried fish shop. All bright below. Low tide, dusty water […] dirt and oil from mud to mud. Like a viper swimming in skim milk.’ For Gray, too, the sublime is there in day-to-day detail, the banal and extraordinary side-by-side.

Amy Sherlock is deputy editor of frieze and is based in London, UK.