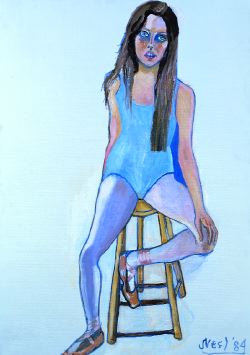 'It has come too late,' declared the novelist Jean Rhys in 1966, when she was awarded Britain's most prestigious literary prize at the age of 72. Like Rhys, Alice Neel, who died in 1984, also garnered critical recognition late in her career, when she was in her early 60s. For most of her life Neel painted nuanced, uncanny portraits of her family, friends and neighbours, as well as New York's resident intellectuals and art world celebrities. Her insolent figuration was both lyrical and shrewd, a kind of armchair analysis that cast the inert sitter in the role of the patient, anxiously anticipating self-discovery.

Meant as a companion to the travelling Neel retrospective organized by Ann Temkin at the Philadelphia Museum of Art, Robert Miller's show focused exclusively on late works in a profuse, if overdue, tribute to her legacy. These canvases are tenderly morbid, intensely personal records of family and close friends that brim with vulnerability, nostalgia, illness and, ultimately, loss. Don Perlis and Jonathan (1982) is a bitter-sweet portrait of a mentally retarded child held in the arms of his doting father. In Brian (1983) the sitter, who died of AIDS shortly after the painting was made, stares out of the picture with a haggard, glazed look, his asymmetrical eyes ringed by shadow. Ginny (1984) is also an exercise in grief, a melancholy sketch of Neel's daughter-in-law, vacant-eyed and weary in a purple robe, mourning the death of her mother.

Neel's trademark blue outline haunts each figure, leaving it with the sketched residue of each beginning. There is a spare urgency throughout the images, as if the artist were paring the canvases down to what was absolutely essential. In Danny (1983) the artist's friend grimaces with unsightly blue teeth and rests his coffee mug on a half-painted orange table top; in another portrait, Marilyn Symmes (1981), Neel suggests a yellow chair with only a few strokes of colour. Like a single prop on an empty stage, the barest approximation of an object activates the space. In her rendering of the body and face Neel lingered patiently, and with remarkable sensitivity, over physical details, such as her meticulous reproduction of the outstretched hands, onyx ring and hairy knuckles of her friend the museum director Tom Freudenheim.

In the many studies of her four granddaughters Neel elicits a longing for youth. Olivia, her eldest, erupts dramatically before our eyes: a glum and unsmiling 12-year-old wearing a childish sweater, her long face in her hands. In a portrait painted four years later, Olivia and Joe (1983), her girlhood has evaporated. Defiantly sexual, curled upon the spread-eagled lap of her boyfriend, Olivia is now a woman, her arm draped protectively over Joe's chest, his hand firmly upon her knee. Self-referential and nostalgic, Lilacs (1983) is a painting within a painting - the flowers partially obscure the view of a watercolour on the wall which Neel made 54 years earlier: La Fleur du Mal (Nadya) (1929). This ambiguity appears in another still life, Passover or Easter (1982), which depicts a quiet table arranged with drooping blossoms and a lit menorah - the wrong iconography entirely for either Passover or Easter.

But then something is always amiss in a Neel painting. She disdained idealized representation, preferring to use her canvases to document the disturbances, distortions and sorrows of the human psyche. Earthy and raw, her portraiture is rooted in extreme realism and the messy beauty of daily living. Her defiant figuration, an uncompromising resistance to the New York School's spiritual abstraction, guaranteed her near obscurity throughout the 1940s and 1950s. Nonetheless, it would be unwise to describe Neel as being ahead of her time. She was of her time and, in fact, ignored by it.