‘Private Gladiator’ was a selection of paintings by Toronto’s André Ethier and new porcelain ceramic works by Melbourne’s Janet Beckhouse. Curated by Neon Parc’s director Geoff Newton, the show tapped into the frustration of a moment that seemed hamstrung by its own apathetic introversion. As if in response to the inanity of high-speed consumer culture, the exhibition revealed a mangled conglomeration of exuberances and fragmented faith systems.

Beckhouse, who has been highly regarded in ceramics circles for many years, is known for her high-gloss, sculptural vessels that depict an often-horrific melange of figures from mythology, folklore and the artist’s imagination. Glazed in a style reminiscent of Victorian Majolica, the vessels fuse a traditional technique with a frank and contemporary viscerality. For ‘Private Gladiator’ they were presented on simple plywood plinths which, when paired with Ethier’s paintings, accentuated the more urgent, excessive and aggressive elements in Beckhouse’s work. Featuring a wild coming together of fragmentary intensities and excessive symbolism, Beckhouse’s ceramics are the physical manifestation of a wandering mind. In her work, the lettuce leaves, basket weave and grapes, typical of Majolica’s ceramic tradition, are replaced with serpent-headed beings (Crocodile Woman), fiery women with nipples and wings aflame (Flame Woman), mythological menageries of scaly-legged mermaids encrusted in coral (Siren), or skulls and foliage (The Protector, all 2011). The artist insists that the pieces are not a reworking of female archetypes or a feminist revision of female mythological figures, but are unconscious renderings of her own torment. It is rare to view work so unburdened by a desire to disguise or obfuscate the immediacy of personal expression. 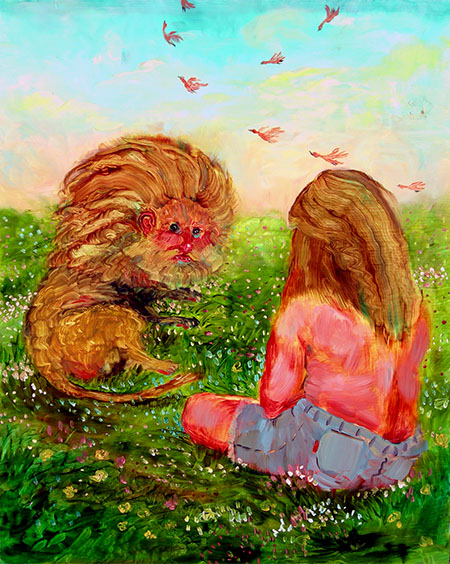 This immediacy, or transparency, is present in Ethier’s work also, although his subject matter is less blatant, housed as it is within a highly personal, ironic vocabulary. Ethier employs the sub-cultural associations of surrealist music posters, gnomes, cyclops and other Dungeons and Dragons-like ulterior realities. Inspired by the fantasies and legends of old England, which bands like Fairport Convention sang about, Ethier uses the traditional medium of oil paint to journey to similarly psychedelic terrain. Whilst much of his work adheres to an abject Surrealism, where paint is brushed to create a kind of exquisite corpse of carnivalesque rockers, Newton’s selection for ‘Private Gladiator’ presented a less gruesome take, opting for cute, scene-based narratives: a small child sits in discussion with a friendly lion (Untitled, 2006), a cloud-headed woman dribbles waterfalls upon her gauzy self (Untitled, 2007) or, in another work, a fur-caped woman sits with her eyes closed and hands clenched in ambiguous sadness (Untitled, 2006). Ethier has remarked that his subject matter reveals itself to him as he paints. This wandering line is ever-visible, evident in the vase of alien foliage, from which a vagina materializes beside clusters of slightly wrong cornflowers (Untitled, 2008).

Both Ethier’s and Beckhouse’s palettes could be described as fairytale expressionism. Deep, dark corners open to impossible redness, and bile greens depict celestially illuminated characters. In bringing these seemingly disparate practices together, Newton foregrounded a trick or a subterfuge in the apparently friendly familiarity of both Ethier and Beckhouse’s media and palette, making it all-the-more surprising when the violent cluster of skulls or the disembodied and flaming vaginas actualize from within the tangle of glossy, high colour line and form. Such a frank depiction of heavy and unrhetoricised subject matter unhinges these works, opening them up, so that they become reflections of the viewer and their predispositions, unconscious or otherwise.

Emily Cormack is a curator and writer based in Melbourne, Australia. She is the 2016 Curator of ‘Primavera: Young Australian Artists’ at the Museum of Contemporary Art, Sydney, Australia.