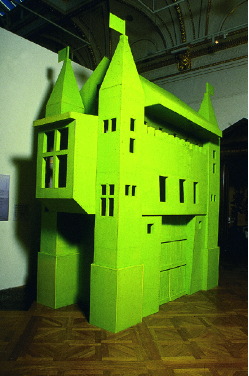 The frontispiece to the book Draw 50 Buildings: The Step by Step Way to Draw Skyscrapers, Churches, Castles, Bridges and More (1984), by Lee J. Ames, proffers the advice 'Have fun with your drawings'. Schematic instructions take the aspiring draughtsman through iconic and vernacular examples of buildings from the pyramids of Giza to an igloo. As with his other guides to drawing, which include horses, mouths, flowers and dinosaurs, Ames' advice is to mimic, for 'mimicry is a prerequisite for developing creativity', the 'joy of making a credible image' encouraging the individual 'to continue and grow as an artist, giving him a sense of pride and accomplishment when his friends say 'Peter can draw a building better than anyone else'.

Andrew Lewis' 'Photo Opportunities' (2003) is a series of 50 charcoal drawings of buildings depicted in the context of imagined but prosaic settings in which individuals or couples are captured variously posing, caught unwittingly in the frame or just leaving it. Some reveal a benign indifference, others a certain vacuity, and a greater number show disturbing melancholy or outright distress. Though quite different from, and a great deal more physically expressive than Lewis' previous drawings, they continue a fascination the artist has previously shown for the interaction of architecture and people, in which he makes prescient observations on contemporary society and what he calls the 'complexity of Britain'.

Originally trained as an architect, Lewis became known for making Archigram-inspired painted cardboard models of imagined cityscapes, or drawings that explore the impact on local communities of, say, an aircraft carrier placed in a Georgian square. All combine a sophisticated use of simple materials with often painstaking detail; the sculptures are often large and propose playful solutions to habitation and transportation problems.

Lewis took Ames' examples and rules as a catalyst for his own picture-making. A sort of reverse abstraction, the results are figurative to the point of mannerism and employ Lewis' typical hard-working methodology simply to get them done. Moving from one drawing to another, their meaning is revealed like a two-dimensional enfilade. The characters with whom he peoples each 'photo opportunity' have a stylistic simplicity bordering on the naive. He avoids repeating motifs, other than giving the figures a certain blank characteristic and an archetypal knapsack.

The opening images of 'Photo Opportunities' are fairly benign, but the sequence becomes darker as it progresses, in scenes of domestic tragedies that become more psychologically tortured, with either arguing couples or individuals in huddled distress. Just when you thought things couldn't get any more depressing, Future International Space Station - Artist's Impression has a somewhat clichéd vision of the future with a huddled figure at the portal of a space station, as the Earth passes by, the blackest hole beyond. Augmenting Ames' initial selection, the drawing reinforces the installation's all-pervading anxiety, beyond mere incidents described in the pictures. They include couples falling out with each other in Leaning Tower of Pisa, people crowding around a dead body beneath an open window in Golden Gate Bridge, San Francisco, racial inference in A Southern Colonial House and ambivalent gatherings outside tourist attractions such as The Alamo, San Antonio. As the strength of emotional content in each scenario increases, so too does the distance between what you see and what you feel.

In the centre of the gallery an imposing lime green Castle was partnered by a smaller hut, Space Shack, both made from sections of beautifully riveted cardboard. Castle imposed a Gothic pomposity, encroaching on the physical space of the gallery rather than being sensitive to it. Occasional openings revealed an idiosyncratic collection of distinctly British photographs that included the Goons, a young Queen Elizabeth II and a lone man on a tractor, ploughing a field. Ducking inside one end of the castle, vitrines reflected blinking fairy lights straddling the void above and housed a plaster model of the crowned Prince Charles. A little like an elaborate chicken coop, the Shaker vernacular of Space Shack contains two small facsimiles of official royal portraits. One is Van Dyck's exuberant portrait of Charles I, the other Bryan Organ's weird Athena-style version of Prince Charles, which hangs in the National Portrait Gallery. Lewis may be considering royalty's contemporary impact on a nation with reference less to empire than to a relationship with the maverick characters that have often come to define the nation. He cites the Emu-wielding Rod Hull, whose tension-relieving (or was it tension-making?) ambushes were at odds with the deeply conservative nature of the man himself.

Lewis' own relationship to Britain is somewhat estranged: the artist lives alone and relatively isolated in central France. From there, his 'Photo Opportunities' eschew hip reflections on Modernism, preferring the mute tension between figure and landscape found in work by the likes of Thomas Gainsborough and his contemporaries. In their description of disenfranchised relationships between different architectural contexts and the people inhabiting them, the drawings in particular convey deep personal misgivings and anxieties about the state of things from Lewis' own removed perspective - a cathartic but hardly enjoyable experience, though strangely compelling nevertheless.