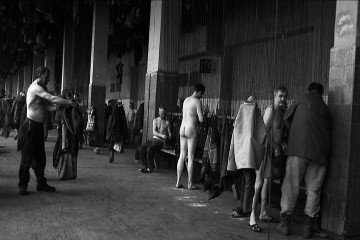 In his five-act play The Weavers (1892), the Nobel Prize Laureate Gerhart Hauptmann portrayed a revolt by textile workers in Silesia’s Owl Mountains in 1844, an uprising into which, though it was violently suppressed, Karl Marx read special significance. Family experiences lent Hauptmann’s play added urgency – his grandfather had himself toiled at the looms. As the play unfolds, building towards the eruption of unrest, it becomes clear that hunger rules the weavers’ lives: one family kills and eats a pet dog; women speak of multiple miscarriages; children suffer from birth defects. Although The Weavers was written nearly a half century after the rebellion, its wrenching naturalism affected many spectators, from Emma Goldman to Käthe Kollwitz.

Anna Molska’s 12-minute film The Weavers (2009), based on Hauptmann’s play, is also set in Silesia – now part of Poland – but she has replaced textile manufacturing with coal mining (another industry with a longtime presence in that industrialized region, and workers whose job security is vulnerable to technological change). As natural resources are exhausted and coal is replaced by other fuel sources, miners are left by the wayside like Hauptmann’s weavers, whose livelihood was threatened by the arrival of power looms. However, the announcement that the Bobrek Centrum mine would be closed down met with no protest from the miners. Struck by the contrast between the 1844 rebellion and the growing resignation or apathy of Polish workers, who used to be known for their activism, Molska secured permission to film there. Her radically condensed version of Hauptmann’s play omits the central event, the rebellion, while retaining selected dialogue and a doleful chorus set to evocative, exaggeratedly mournful music commissioned from the composer Krzysztof Janczak.

As the film begins, we see three unemployed men walking through a barren landscape, and then sitting down to share a meal by a bonfire with the mine in the background. The film cuts repeatedly between shots of the trio, flatly reciting despairing lines from the play (dubbed into English for the show, which increases the work’s sense of alienation), and footage of miners at various points in their workday, accompanied by music or voice-over narration. Filmed in medium-long or long shot, and often grouped together in the frame, the workers are indistinguishable as they scrub each other in the showers, descend underground, dig and operate machinery with the aid of lamps, and re-emerge into daylight. After the men by the bonfire remark that the weavers are singing a funeral song, we hear a dirge, the lyrics of which – such as, ‘Oh, you villains, Satan’s spawn, you eat the bread but send hunger down’ – portend a grim climax that never arrives. In an interview with the curator, Anke Kempkes, Molska remarked that although she saw Hauptmann’s play as a ‘weak text written with a bourgeois audience in mind’, what mattered to her was removing the rebellion and working with what was left over, as if she were gutting the action from an action movie.

With its restrained camera-work and images of male bodies that recall 19th-century Realist painting, The Weavers radiates bleakness, but Molska has also made absurdly humorous videos addressing work that puncture the fantasy of art-making as a Utopian endeavour. In her deadpan black and white video Tanagram (2006–7), two young men clad in gladiator-style helmets and jock straps rearrange blocky shapes on a parquet floor, as if struggling to realize a three-dimensional version of Kasimir Malevich’s Black Square (1913); the soundtrack includes faux-Russian folk music, songs by the Red Army Choir and dialogue cribbed from a Polish-to-Russian phrase book. In another video, W=F* (Work) (2008), Molska hired distinctly non-heroic-looking workmen to construct scaffolding; the men griped as they worked, then stood on it hesitantly, in contrast to the strapping, apparently enthusiastic youths who formed human pyramids in Soviet spectacles. Alexander Rodchenko photographed both male and female Soviet athletes, but Molska often emphasizes male subjects, suggesting another reflection of the gulf between ideal and reality. It might be surprising to some that Molska cites documentaries by Marcel Łozinski and Krzysztof Kieslowski, and feature films by Kazimierz Kutz, as influences on The Weavers. But despite its rigorous restructuring, the film represents a sober attempt to, in her words, ‘assess the reaction of people submitted to manipulation and oppression’.