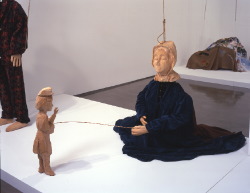 Sprawling on a dais and vacantly leering, its outstretched paws scraping the surrounding air, the giant marionette titled Bestial (all works 2003) in Anne Chu's recent show has the force of a brushstroke in a painting by Franz Kline or Willem de Kooning. Its wooden head and limbs are carved with apparent urgency and evoke gestural lines. At the same time, with its huge, ungainly, barrel-shaped body, crafted from wire and sewn-together squares of cloth, this bear-like figure might have rolled out of an especially inventive children's book. Among other things, its endearing, cartoonish eccentricity and fractured design echo folk-tale illustrations by Marc Chagall and other early 20th-century Russian Modernists; like the best of those artists, Chu manages to invoke fantasy without descending into whimsy.

Several more marionettes were also arrayed throughout the gallery, hanging from the ceiling and appearing to stand or sit on low platforms: a dark-blue-garbed girl facing a smaller, apparently male, figure; a doleful man with a bandaged head; a 17th- or 18th-century puppeteer holding a puppet and wearing a coat dotted with yarn tufts in enchantingly harlequinesque colours; and even a landscape suspended by strings. Rounding out the group were two non-marionettes - a statue of a dwarf on a pedestal copied from a Velázquez painting and carved from a single piece of wood, and a bronze raven that gazed down on the other assembled creatures from a high perch.

As with her earlier pieces that drew on T'ang dynasty funerary sculptures or European medieval art and artefacts, Chu carved these wooden figures (or in some cases wooden body parts) using a chainsaw, and the effect is wonderfully loose and spontaneous, as if she were working in clay. Although her sculptures tend to be aggressively anecdotal, they can sometimes be surprisingly abstract and frequently engage formal issues. They dramatically animate the spaces they occupy, but often seem intended to be viewed only from the front, like paintings or actual puppets. (The Diego Velázquez dwarf in El Primo, for example, calls to mind Constantin Brancusi sculptures that incorporate bases while simultaneously acknowledging the two-dimensionality of its source - walk around to the back and you might as well be peering at stretcher bars.) Chu's watercolour drawings similarly juggle formal challenges and an illustrational impulse, in that the images depicted - mostly single figures or landscapes, as in the sculptures - are at once volumetric and flatly vignetted in the centre of a white page.

And this kind of precarious balance between disparate elements seems to define Chu's work as much as her off-kilter imagination and visual flair. Scale and weight especially come into play. Landscape Marionette II, the hilly puppet that lends a dramatic sense of scale to the puppeteer wielding his Punch - he towers over the landscape like Gulliver in Lilliput - is wonderfully sketch-like. On one side its patches of brown and white cloth are covered with unfussy machine-stitched scribbles that suggest patches of grass, dirt, stones or flowers; on the other side stitching in black thread suggests the edges of expanses of snow. The marionettes are also, of course, larger than most marionettes (about human size) and are thus doubly likely to inspire a sense of having entered into a world of the artist's own making. Weight is also engaged and undermined: despite their considerable size, some of the figures seem almost to float.

Many of the sculptures suggest multiple allusions. The kneeling figure in Charming Girl, with her sombre features and veiled or hatted head, evokes both wan medieval Madonnas and 19th-century bonneted women; her relationship to the childlike smaller figure that faces her and is attached to her by a slender stick, is intriguingly ambiguous. In general, the gawky poetry of Chu's cosmology pays off - the raven, for example, doesn't seem derivative of similar birds in work by Kiki Smith or Annette Messager, and it is livelier than the former and nearly as evocative as some of the latter.

Much of the work's strength stems from the tension between the artist's obvious enthusiasm for painting and her assured sculptural sense. The show left one wanting a bit more, however: one wishes that Chu had more carefully orchestrated the relationship between some of the figures, in a formal way or otherwise, without necessarily imposing a specific narrative. In this latest incarnation her tantalizing parallel world was a little too fragmentary. Still, her freewheeling approach to sculpture can be startlingly particular and fresh.