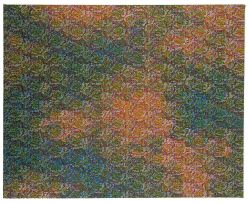 Anoka Faruqee wants to be a cyborg but remains a robot. Most of her paintings consist of thousands of the same small interlocking shape, which resembles a seriffed asterisk, while others use a kind of wimpy, apologetic, vertical line to mask the surface. The former group best documents her silicon dreams.

Applied according to a grid, colours change irregularly, some recalling the faded colours of a 17th-century tapestry, while others glow like a child's birthday cake. As if insisting on acknowled-gement, the painting ground occasionally peers through the surface, despite the otherwise uniform coverage. The result looks like a clumsy but coherent desktop pattern, or the glorified geometric doodles of a civil engineer.

Unlike much art that addresses the digital age, these paintings don't look like some floating notion of the future - after all, Hugo Ball didn't need to sprout metal wings and fly around the smoke-filled room of the Cabaret Voltaire to discuss the absurdity of the European war machine. As long as metaphor remains available as a vehicle, in the hands of the right artist, painting is as good a medium as any to discuss such concerns.

Cyber culture shares with the designs and architecture of Islam (from which Faruqee also draws) a humbling of the individual which occurs through interactivity, envelopment and the perceptual placement of a subject in a network greater than oneself. Simply by the act of looking, the viewer becomes part of a vast mechanism. Just as a touch-screen awaits a specific inquiry from the next info-seeker, Faruqee's surfaces are reliant on the presence of an individual to commence a ritual of exchange.

Witnessing one asterisk coming into focus as another fades into the background, a kind of indebtedness accompanies the perception of each labour-intensive plane. 'For me? You shouldn't have!' It's not unlike the grateful awe surely experienced by the receiving community during a potlatch. If sacrifice comes from the production of sacred things, these surfaces are made sacred (and gorgeous) through the loss of time. Faruqee burnt a lot of hours applying these multi-coloured marks, and, like the host tribe squandering their guest's gifts in a bonfire finale, she knows this isn't an exchange, but a display of productive power - the sentiment of this offering will not decay even after its host object does. Her effort is a benign exhibition of potency, something akin to dog-walkers in an urban environment displaying their leisure power.

Pop's retrieval of everyday materials was manifested in the work of 'Pattern and Decoration' artists via references to domestic textiles. Faruqee's work is often compared to this brief but continually resurrected school, which also shared an interest in Islamic design. But she has divorced her individual marks from any cultural referent other than sheer uniform repetition, leaving only evidence of a machine in bad need of oil. She may be a wanna-be cyborg, but her paintings succeed because they reveal the failure of her desire.

Perhaps Faruqee is now better prepared for entry into an increasingly digitized world. Silicon culture and Islamic art share principles required for the smooth interaction between information and identity. There's no room in these ancient and contemporary civilizations for the incessant resuscitation of the Occidental sense of self as prime mover. The achievement and maintenance of identity is for sale right next to be-one-with-the-cosmos literature and accoutrements. Humility is just another stance - and that's okay.