Another Brick in the Wall

Six years ago the run-down Kingsdale School in south London was threatened with closure - until architects dRMM were invited to help with its regeneration; they later invited artist Joep van Lieshout to contribute to the scheme. 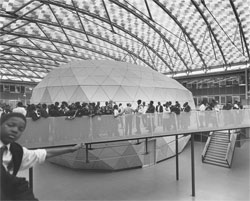 When architect Alex de Rijke spoke last year at the Royal Society of Arts about his collaboration with Joep van Lieshout, it wasn’t a surprise to hear that van Lieshout’s contribution was to be a big dick. We’ve heard it all before: modular multi-women beds, gun-toting anarchists, the self-policing state – it makes a penis look like a pretty flaccid contribution. But de Rijke was referring to the regeneration of Kingsdale School in London’s East Dulwich, a failing, run-down secondary comprehensive designed in the 1950s by Leslie Martin, the architect of the Royal Festival Hall.
When new headmaster Steve Morrison arrived in 1998, an army of councillors and officials were pressing for the school’s closure. The Architecture Foundation’s innovative School Works approach was altogether different from the usual ‘let’s buy more books and computers’. Morrison resolved to change behaviour in the school by physically altering the environment – not a new idea, but one frequently lambasted today for being ‘old-skool’ Utopian. Yet really it’s just common sense. If our ability to alter the structures and space that surround us has no effect on the way people behave, does architecture not boil down to mere form-making, aesthetics and navel-gazing debate?
The great thing about the Kingsdale project is that it’s socially engaged. It began when a staircase was temporarily closed during routine maintenance work and Morrison noticed significant changes in pupil conduct. His ‘pie-in-the-sky’ idea (as most referred to it) to plough money into the building as a means of
producing results was pitched to the then Education Secretary, Estelle Morris, and eventually £12 million was squeezed from the coffers. An architectural competition was organized with the Architecture Foundation, School Works, and dRMM were appointed as architects.
dRMM resolved to ‘unlock the plan’ of the rectangular building. At its heart was two large uncovered courtyards, dead spaces used mainly as a short cut to the other side of the building. Movement around the school was via a circular route on each of the three floors, accessed by four staircases; there were no direct paths around the building. Half a day’s teaching was lost every day just getting classes from A to B. And that was for the pupils who stayed – many others slipped out during the resulting chaos.
The architects proposed to ditch the existing hall and build another roof over the courtyard, comprising transparent air-filled pillows that now arch over the space, inflating and deflating to regulate sunlight and thereby heat. They have also replaced corridors with open walk-ways which run around the courtyard at first-floor level, and a bridge to provide direct access between stairs on each side of the building. The classrooms have also been altered. Head to the top floor and you can see what the place used to be like (works are still ongoing and should be completed by Christmas, with further plans to expand facilities next year – the school has amazingly been kept open throughout): a long corridor punctured by windowless doors, which allowed no visual connection to the classrooms, and with plenty of places for bullying and mischief.
Radical changes to the teaching spaces mean that Kingsdale plays out Jeremy Bentham’s idea of the Panopticon. Slit windows pierce the walls at different levels, allowing visual access both in and out of the classrooms at all times. This approach extends to the teachers’ offices – glazed rooms that bleed into the circulation space, enabling children to see staff and vice versa. It’s passive surveillance. The reanimated courtyard space is overlooked at any time by half the school, meaning that lunch (eaten in the courtyard) can now be overseen by one teacher, rather than being the quasi-military operation it was before. There’s no place to hide.
Except, perhaps, in the distorted geodesic dome at the courtyard’s heart. Enter the doors of the new auditorium and the rest of the school falls away. It’s in this sacred space that van Lieshout was able to have his wicked way. He designed a functional sculpture, a ‘cannon’, a cantilevered structure that works both as air duct and as lighting rig, removing the necessity for skywalks. It can be lowered and raised (to direct light to specific points), something that de Rijke interprets as having ‘odd sexual overtones, a controversial element to mix with a local authority and bureaucracy’. But once you see the structure it becomes clear it’s simply a good piece of design, attempting to work with dRMM’s space, which is impressive for its lack of internal columns. Van Lieshout declares that for him it was more of an architectural project than a piece of art; instead of being wantonly provocative, he’s been more concerned with how an artist can affect the design process. Kingsdale School has now been the top school in the borough for three consecutive years, and the number of pupils achieving the three highest grades has climbed from 11% to 42%.